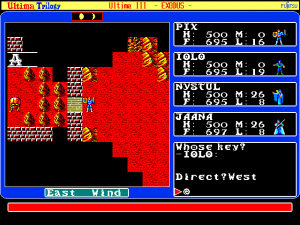 It took about another 90 minutes to finish Ultima 3. Most of that was spent filling up with gold and journeying back to Ambrosia. Once that was out of the way, I just needed to get the four marks and make sure the Time Lord hadn’t changed the order of the cards in this version. 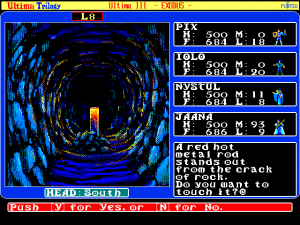 When you know where to go and have a fully equipped party, gathering the four marks takes no time at all. I used my cleric and wizard to quickly get me up and down levels and had all four in around 15 minutes. 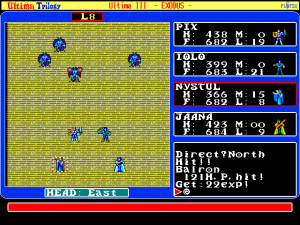 On my travels I met some subtantially tougher creatures in the lower dungeons but my party had no trouble with these at this stage. After a tough start the combat in this game didn’t keep pace with the progression of my characters making the game easier and easier the further I got into it. Also, it is possible to run from combat in this version by backing out of the combat map. I only ever made use of early in the game but I don’t remember this even being a possibility on the PC.

The trip to the timelord went similarly smoothly apart from some fun and games trying to go through the right moongate. The Timelord makes more of a speech in this version but the order of the cards hadn’t changed. 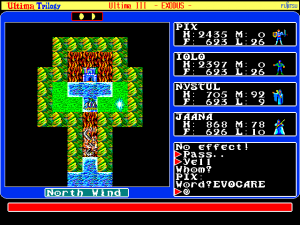 After that I healed up and headed for Exodus. The snake lets me pass after yelling “Evocare” and I head into the castle. 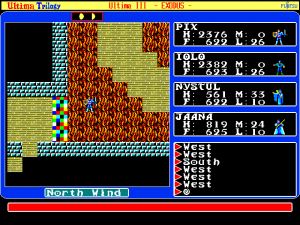 I wasn’t so sure my party was going to be up to the final battle. I’d maxed out the hit points of my two front line fighters at this stage but my spell casters were relatively weak. I needn’t have worried though. My spellcasters certainly came close to death but I would easily have been able to finish with just the two characters if it had been required. This part of the game was much, much easier than on the NES. 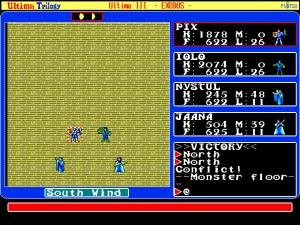 I did run into more invisible floor monsters than in the other versions with my first encounter being in the top left of the map. These died in a single hit without fail so it’s just a question of bunching the party and attacking constantly. 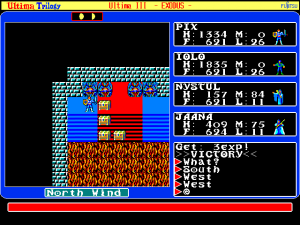 When I get that far, Exodus doesn’t look all that much like a computer. From these tiles I’m not sure I’d make the connection without the text telling me in the bottom corner when I insert a card.

One addition which I’d not seen before is a quick end cutscene where a passage opens up behind Exodus through which I run through and see a floating orb of some description. At least in this English version the text doesn’t make it too clear what this is but it soon fades and I run away under instruction from the Timelord.

The big finale cutscene is in English this time, although only barely. The bad translation doesn’t give completing the trilogy quite the air of achievement I would have hoped for with lines like “Doesn’t it look like the spine of a snake, does it?” but it’s still the best ending I’ve seen on any version so far.

I’ve enjoyed my time playing through the Ultima trilogy again for the first time since week 1 of this blog, although it certainly brought it home just how much farming is required in these early Ultimas. As a whole the FM Towns is the best version I’ve played with Ultima I & II being a big improvement, admittedly with some reservations. With Ultima III it’s a much harder call as the original music is so much better. This version probably still wins out over the enhanced PC version given the dungeon graphics and cutscenes but it’s a close call. The NES version had its good points also and is certainly another decent option although I did find it moved a little slowly for my liking. I expect that I’ve yet to play the best version as the Lairwair Mac version looks potentially the best of the bunch.

If you’ve never played Ultima 1-3 and fancy giving it a go, you could do a lot worse than tracking down a copy of this for FM Towns. The improved graphics and tweaked interface make it substantially more accessible and the Unz emulator has been rock solid with no issues at all. The trilogy is usually a crazy price on Ebay but is available at far more reasonable prices direct from Japan.

There is a certain Origin anniversary coming up tomorrow which will form the basis of a post or two on here and hopefully elsewhere. After that, I think I’ve going to have to give Wing Commander Saga a go.