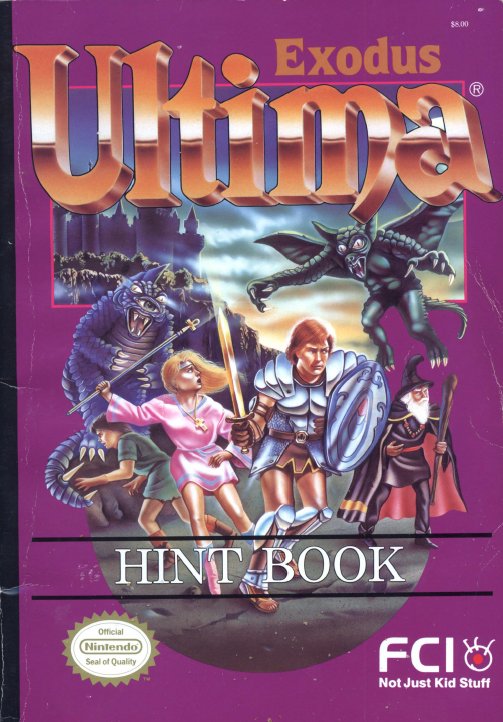 This was published in 1989 by FCI and is a translation from the Japanese original. There were equivalent books for later Ultima games released in Japan but these never got a translation unfortunately. I’m limiting myself to Western releases so you won’t be seeing any of the others on this blog. This book wasn’t the easiest to scan in as the print tends to go right to the spine but it’s not come out too badly and is now in the downloads.

The Ultima series was huge in Japan leading to all sorts of spin-offs and merchandise. These included a series of Manga’s (link) which only have a passing resemblance to the Ultima I know. The U3 guide starts with a Manga of its own telling the story so far. I never quite imagined most of the characters looking like this. There was a severe clothing shortage in early Sosaria it seems, but it’s well drawn and moderately faithful to the series.

We then get onto the stuff that is going to help you beat the game. This is all presented in an equally colourful manner, starting with general advice on party creation, weapon stats, items in the game and the like. I’ve never actually played U3 on the NES apart from starting it up for a quick look. It’s clearly branched away from the original game in some ways looking at these but remains fairly true apart from some name changes.

There is a full bestiary with pictures of all the denizens of Britannia. They are presented in a very cartoonish manner and look a little ridiculous. Give me Denis Loubet’s drawings over these any time.

After a map of the realm on the middle pages, the book moves onto maps and guides to each town. These are accompanied with a few hints of what to do. This guide never actually gives a straight walkthrough although it does give more explicit instructions than the original Ultima 3 cluebook did. There were clear changes in gameplay in the NES version such as giving flowers to Sherry to get a compass heart. At the end of the book is a two page map of Exodus castle but you are left to figure out what to do on your own

This guide presents a very cartoonish version of Ultima and I prefer the regular U3 cluebook without a doubt. There is more information in this and it’s certainly colourful but it’s a long way from anything Origin would have turned out themselves. The tagline of “Not just kid stuff” on the cover strikes me as a little ironic but it still has to be worth a look just for the comic at the start.