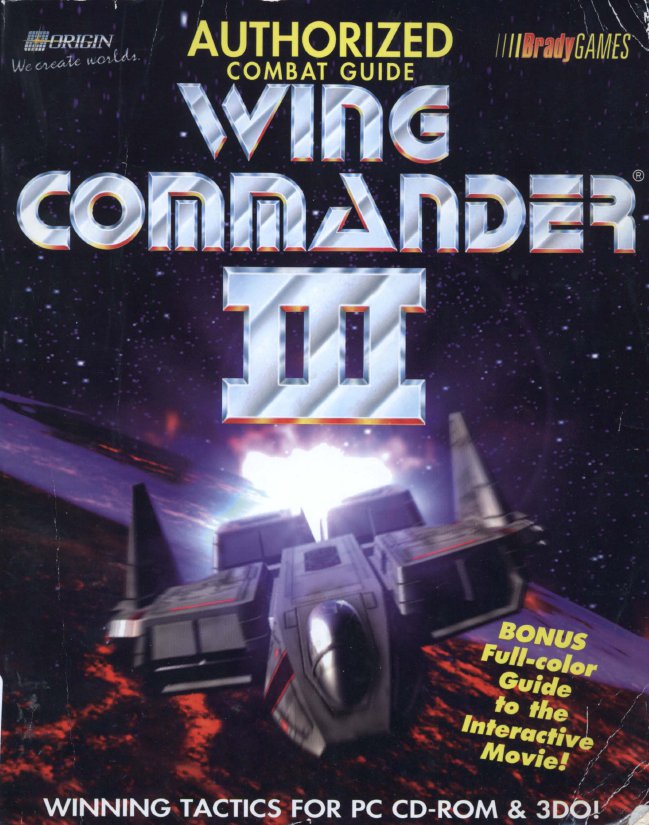 This was published by Brady in 1995 and is now available to download with all the others on here. I’ve already looked at one Wing Commander 3 guide which pretty much covered everything and this begs the question why we needed another? I’m assuming that the reason is that this book also covers the 3DO version of WC3. It doesn’t just restrict itself to the 3DO though and covers the PC version as well.

It starts in the same way as the WC4 guide I looked at recently with a series of stills from the movies with a plot description by each, followed by some very short interviews with a few of the cast. The interviews are the sort of thing that came with every interactive movie back at the time with a list of credits and a lot of talk about this being the beginning of a new medium.

The book then moves onto a whole chapter on what is going to be in the book. This sets a precedent for unnecessary detail which continues on as the next chapter goes on to describe all the controls in the game. The manuals had this covered and it really isn’t needed here. It intersperses it with some ship descriptions and tactics before going onto describe the 3DO controls in the same detail.

Most of the pages are taken up with the mission descriptions. These have notes from a Colonel Hart who gives tips and advice. These add a little entertainment value but not enough to make it worth reading through all these missions unless you are struggling to complete them. There are two lists of opposition on each mission as the 3DO version tended to have fewer enemies that flew better. The final chapter tells you how to cheat on the 3DO, with all sorts of options for skipping missions and watching cinematics built into the game.

Unless you really want to know the details of the 3DO missions there is little reason to bother with this book. I’d rather have seen a 2nd edition of the official guide as the authorised combat guide doesn’t have much extra to offer in its own right but misses out a reasonable amount.