Ultima 3 was released on the NES either in 1987, 88 or 89, depending on whether I believe Mobygames, the back of the box, or the Ultima wiki. According to the wiki, it was written in-house at Origin but couldn’t be published by them directly due to Nintendo’s stringent licensing arrangements and this led to it being published indirectly via FCI. I’m informed however that this isn’t necessarily the case and the credits are solely Japanese names. There aren’t any credits at the start of the game or in the manual so I’ll have to finish it to find out for myself it would seem. 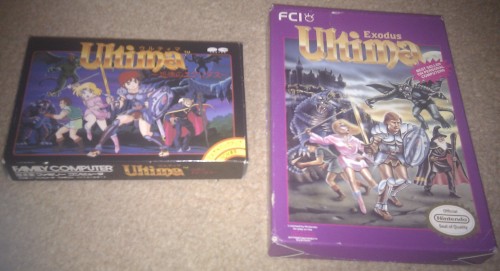 I’ve got two versions both featuring very un-Ultimaesque covers, the Japanese one especially with its manga characters on the front. The manual is fairly substantial but is nothing like as much fun as the original PC version with its two separate spell books. It only has one short page on the history of the series and hardly sets the scene considering that it was the first console Ultima.

While I’ve been curious about these console Ultima games for a long time, I’ve never had more than a glancing look at any of them so playing this will be a first for me. It has to be said that I’m not much of a fan of the NES as a platform or JRPG’s for that matter. This doesn’t make me optimistic going into this but I didn’t expect much from the SNES Wing Commanders either and they didn’t turn out to be bad at all so I’ll attempt to keep an open mind. 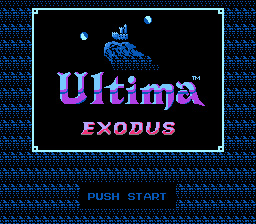 The first thing to note is that all the original music has been replaced by tunes that wouldn’t sound that out of place in a Final Fantasy. Personally, I preferred the original tracks but the new music is quite good if lacking the medieval Ultima approach. The new themes are repetitive but no more so than the originals, and they haven’t begun to grate yet although I have been playing a large portion of this while listening to podcasts. 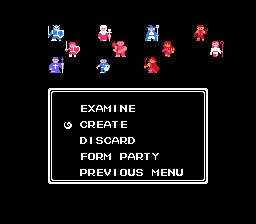 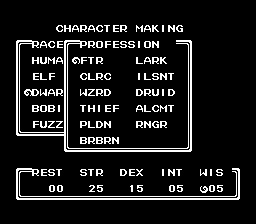 Character creation is a similar affair to what I’m used to. Not knowing any differently I create a Fighter/Thief/Mage/Cleric party which worked well enough in the PC versions of the game. I’ve heard that some of the character classes are close to useless if you make the wrong choice at this point. 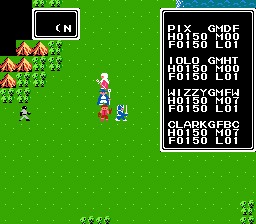 On starting the game, it looks very different to the PC and I can’t help but think of Final Fantasy again. The tiles use some very bright colours but it looks a lot better than CGA graphics ever did. It’s perhaps not quite up to Final Fantasy standards but one thing this has which it didn’t is the field of view also introduced in the Apple II original. 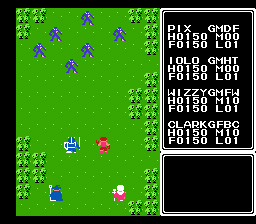 Rather than having one character represent the party, the members trail along behind each other like a snake. With such a large target, this makes it tricky to avoid combat with the numerous bands of creatures roaming around the land. On entering combat, I start to notice my first major gameplay difference in that the cleric and mage are by far the most powerful characters at this stage in the game. They both have free spells which will take out entire parties of early level monsters (depending on monster type). Magic points are quickly regained and it’s the front line fighters that I’m struggling with in the early encounters. This is the opposite of most RPG’s I’ve ever played. 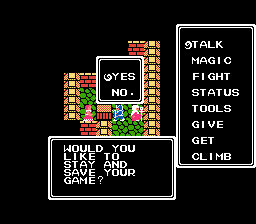 I head for town and stock up on equipment for my fighters. The best weapons on offer are blowpipes which are a new one for me in an Ultima. Range weapons have to be the way to go, so after selling all my armour I get one for my fighter + a sling for my Thief. The town itself has a passing resemblance to what I remember but there appear to be fewer people and none of them say the same things. Saving is done at pubs in the towns without any cost. Since I’m playing this on an emulator, I’ll be sticking to savestates. 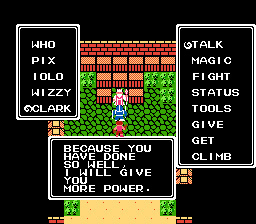 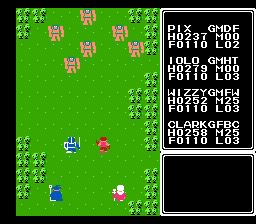 At this point, I start to slog my way through as many monsters as possible to raise some money and level my party up. There is certainly no shortage of opposition and I’m soon raising a little capital. LB is in the usual place on his throne and raises levels on request as I gain experience. There is a downside to this in that there is a clear link in this game to the opposition I face and the maximum character level. The tougher monsters that start to appear are immune to the usual cleric/wizard spells and I can’t clear a screen of them without doing it the hard way. I’ve never liked RPG’s with this sort of mechanic. It takes away the reason for levelling up in the first place, and leaves me wondering if I’d be better off if I’d not bothered. 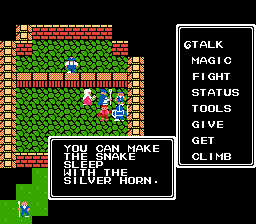 My characters are starting to get as powerful as they are going to go without the Mark Of Kings so I begin a tour of the towns at this point. There aren’t a huge number of these but they do take a little exploring. I talk to everyone I find but I can’t say that I gain much in the way of useful information, although there are plenty of areas I can’t explore without a large supply of keys or various marks to get through fields. I do obtain a gold pick by looting treasure from one of the shop counters. I know enough about the game that this is used to dig up the mystic armour. I don’t know exactly where this is but it’s a small world map and should be on a little island. 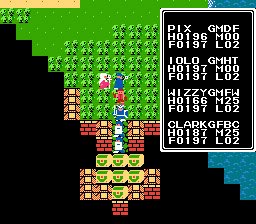 In the absence of a ship, I carry on playing tourist. I spy a hoard of treasure in one town but it was well guarded so I reluctantly left it behind and decided to try some strategies for grinding out some money. The first of these involves some dungeon delving into the dungeon west of Dawn. By casting spells down to Level 8, I could collect the large quantities of treasure on the bottom level and there were fountains in supply for curing poison and healing up. 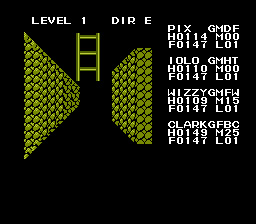 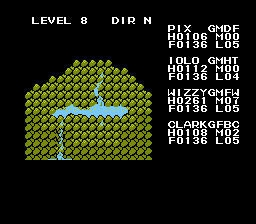 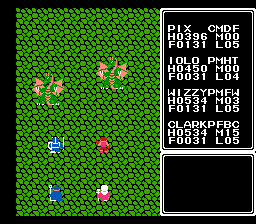 I wouldn’t say that the dungeons are safe but they appear to be sparsely populated from the explorations I’ve done so far. They are different in layout to the ones I remember. My previous strategy on the PC has been to continuously raid the same hoard of 6 treasure chests over and over on the first floor of the Perinian Depths but that dungeon doesn’t even exist here. Forays into Level 8 of this alternative dungeon are fairly profitable netting me about 2000 gold but they carry an element of risk and take a while with me having to wait for MP to regenerate to cast the down and up spells getting there and back. Aside from the risk of being poisoned, it’s possible to catch a cold from all the chests. I have no idea what the consequences of this are but I assume it’s much the same as poisoning. 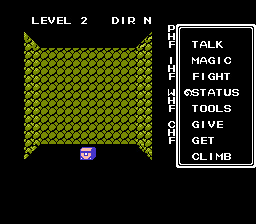 The dungeon graphics are certainly improved, but still not great. It’s impossible to see treasure chests (or anything else) 1 square away. There are no graphics for monsters at all because of this and they simply appear out of thin air. This does nothing for the gameplay when exploring, forcing a methodical square by square approach. On the bright side, there are wall textures which are certainly an improvement over the usual flat one colour panels.

This dungeon delving isn’t netting me money as quickly as I’d hoped. None of the chests in this game contain anything except gold. When playing the PC version, the real profit was to be made by selling off the armour. It occurs to me at this point that some of the towns have casinos. This isn’t unheard of in Ultima but they certainly weren’t in U3 before. With excessive use of savestates, I figure it should be possible to gamble myself wealthy and maybe save a bit of time in the process. After all, I’d hate not to have finished this game before my VFX-1 arrives. 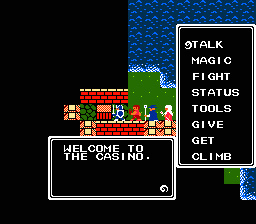 The gambling game of choice turns out to be Rock, Paper, Scissors of all things. Unfortunately the maximum bet is only 100 GP which is doubled with each win. This still turns out to be a reasonable way of raising cash but not all that much quicker than the dungeon delving. I’ll take whatever is fastest though so I may well end up grinding some cash this way. I expect I could max out the parties gold in an hour or so but it’s not going to be the most entertaining hour I’ll ever spend gaming, and I’d probably have to do it at least a couple of times. 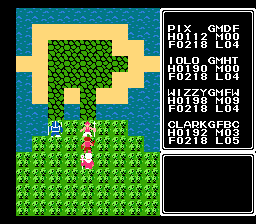 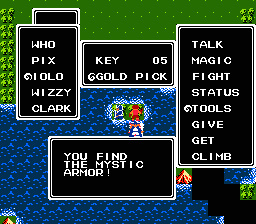 By around this time, I’ve got some party members up to level 5 which means that pirate ships have started to appear on the coast. I hijack one of these and sail to the first 2 square island I come across looking for the mystic armour. I must have been very lucky here as I immediately get the armour I was looking for. This should put me in a much better position for the rest of the game. The armour prices are extortionate and there was no way I was going to actually pay them.

I’ve spent a good few hours playing this now and it doesn’t feel like I’ve got very far. Having said that, I’ve half explored most of the towns so I must have seen a lot of it. The obvious task at this point is to raise enough funds for a couple of trips to Ambrosia. This is going to mean a lot of dull grinding but at least I’ll get to break it up by exploring the hidden continent in the middle.

I wouldn’t say I’m overkeen but I’ve not had a bad time playing this so far. It does seem to be 80% grinding but the original had it’s share of this. I can’t honestly say it has felt much like playing a PC Ultima and it’s practically a different game with the same overall theme and goals. From my point of view, I’d actually count this in it’s favour as it makes playing it now more worthwhile. I’ve been fortunate enough to have an advance preview of the forthcoming graphics patch for Ultima 3 which I’d rather be trying out in all honesty but this is still OK. It’s heavier on the combat than I would have liked and I’m hoping that levelling up my character stats will help me to speed through this to some extent.

It’s quite slow to play in general but I’m sure the PC original was no faster on a 1983 machine. Playing that now, one of the things I like about it is the ability to do things extremely quickly once you know the keys. It’s one of the reasons this and other early Ultima’s are still so playable on the PC in my eyes. Having to go through menus here does slow proceedings but they are well thought out considering the limitations and I’ve not had any trouble with them.

First impressions then are that this is a surprisingly good port. It certainly isn’t Ultima as I know it but it’s still fun in it’s own way. I hope I still feel that way after the forthcoming gold farming.