I’m back just in time for Xmas with another Origin relic dating from January 1992. This is a letter from Fumitaka Sase of the Fujitsu FM Towns department to Robert Garriott asking for permission to use an alternative cover for the FM Towns port of the game. He cites his reason for the change being that Japanese tend to be group oriented so they introduced a party on the cover while trying to maintain the same atmosphere. The team behind the NES port in Japan clearly felt differently keeping the single figure of the Avatar which was used on just about all of the other ports. 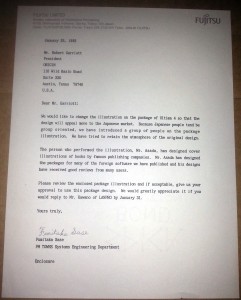 To go along with the letter there was a print of the illustration which is identical to the one ultimately used on the cover as far as I can see. This unadulterated version doesn’t have all the text/logos obscuring it and was slightly cropped on all sides for the final box art. 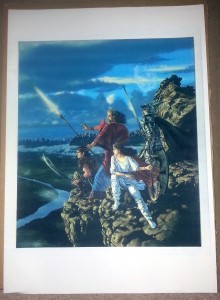 I can’t promise that posts will be any more frequent in coming months on here but I should have a new “tour” of the collection coming up over the holidays for those curious about how many games, gaming systems and related ephemera it’s possible to pack into one small loft conversion. I’m also hoping to get started on SNES Ultima 7 sometime soon but for now I’ll just wish a happy Xmas to all.