I’ve finally gathered the willpower to start on NES Ultima 5 now that I’ve finished Bioshock Infinite. I was a little disappointed in the end with the new Bioshock. The story was intriguing but not necessarily well told with large amounts of exposition coming in the latter stages in a flood. The gameplay was the main letdown though and as an FPS it was barely above average. In hard mode it could be quite poorly balanced especially in the later boss battles where I ended up relying on cheap tricks/poor ai. To be fair a big hitch was that my graphics card proved to be not quite up to the job which will have influenced my opinion and it hurt combat mechanics with aiming being harder than I would have liked. I’m going to have to upgrade before the Star Citizen alpha and I think I may treat myself to a GTX 670 in the next month. When that arrives I will go back and give this another go, possibly in 1999 mode and I expect I’ll like it more. There still isn’t enough new here though and the original Bioshock made far more impact on me. Out of the last two games I’ve played I can honestly say I enjoyed Death Gate more than Bioshock Infinite – not an opinion you are likely to see on any other website.

Onwards and downwards to Ultima 5 anyway. This was released in 1993 and unlike previous entries in the series on the NES must have been developed within Origin judging by the credits list. It’s main claim to fame is often being described as the worst RPG on the NES and generally being regarded as legendarily bad. Hopefully this isn’t entirely deserved but I’ve not got high hopes now that I’m about to start on it. Today I’ll just be doing what may prove to be the most fun part, having a quick look at the packaging and manual. 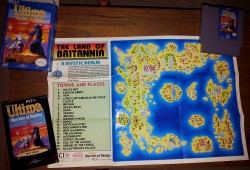 There is no cloth map here but there is a large paper map with a mostly familiar looking Britannia depicted on it. It’s been squashed together in a square but it’s recognisable which is good enough for me. 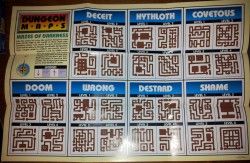 The back of the map has most of the dungeon maps. This certainly takes one element out of the game if these are revealed right from the start but I expect I’ll be grateful for anything to speed me through the game. Despise is missing from the map and placed in the manual instead. Also missing are 4 floors out of every dungeon due to the limitations of the NES. 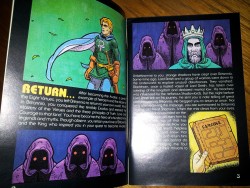 The manual is fairly hefty at 64 pages but nowhere near as much fun as the original documentation. It makes up for lack of character and atmosphere to a degree with plenty of colour and drawings at least. It’s already on replacementdocs.com so I’ve not scanned this one in. The USA manual for Ultima 4 served as a hintbook to the game to help out us simple Westerners and this follows in the same vein with most of the book being tips for each town and strategies for beating the game. The phrase hint book on the front is still slightly misleading as it also contains regular sections on game controls and a bestiary. The story is presently woefully briefly and does a terrible job of representing the heritage of the series up to the point with most of the space being used for the hints. I’m sure I’ll find it all useful and intend to take full use of any help I can get but the out of character presentation does nothing to draw me into Britannia.

I suppose I can’t put playing this off any longer so I’ll get an hour in now and see if it deserves the reputation it has.