I’ll start this post by talking a little about the interface in Ultima 5 which so far hasn’t received much of a mention. Each character has 3 inventory slots – one for armour and another for each hand. Other than equipping them, I’ve no control at all over the other party characters who follow along behind me (most of time) and fight automatically. In the case of the avatar I can use whatever items I have in either hand at any time with the A button whether it’s a sword for combat, a tent, a spellbook, etc – every action works this way. 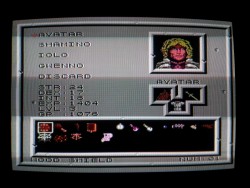 The start button brings up the inventory shown above which allows me to select which items I’m carrying. It would be a whole lot easier if I could use items directly from here rather than having to equip them every time. E.g. Every time I want to use the tent to recover/save the game I have to first equip it and then swap back to my shield again after. This is relatively quick at least and I can live with it. It’s obviously a huge simplification from the way the real Ultima 6 engine worked and the inventory shown is a shared one so I can’t use my party as pack mules.

The B button is kind of an ‘interact with world’ button to talk to anyone or pick items up. Finally the select button allows me to see individual stats. I notice in here that my party members don’t level up and will be as they are for the whole game it appears. 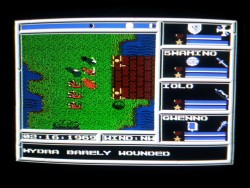 In general, the control scheme works OK. The difficulty lies with the unresponsive nature of the game which can take a while to pick up that a button has been pressed at all. I’ve found happens less on real hardware than on emulation but it’s far from speedy. There are strange quirks also like characters blinking in and out of existence when I have a cursor up sometimes, presumably breaching a sprite/memory limit.

A big plus for me is the Ultima 6 type combat where I only have to worry about the Avatar and the rest of the party look after themselves. It means I can spend a lot less time fighting monsters and more time exploring. As far as I can tell, the monsters on the map are all preplaced and will respawn the moment the moment the appropriate tile is on the screen which can be a pain if you walk back to an area you cleared 5 seconds ago. There doesn’t appear to be any penalty for sleeping in the tent after every battle so I’ve not struggled too much on this front yet. 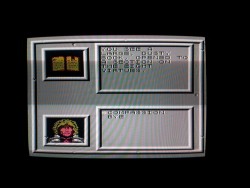 To get back to the playthrough, my main aim was to find a boat and start completing shrine quests. I headed South from Britain via Paws, Trinsic and eventually Serpent’s Hold which is connected by bridges to the main land mass in this version. The towns were more populated than Britain had been with maybe 5 or 6 people in each – not exactly a bustling metropolis but the core of the conversation gameplay mechanic is still there. It’s massively oversimplified on the NES with everyone throwing clues at you and little else and subsequently massively easier than it was on PC. I’m not sure how much sense I’d make of all this if I didn’t already know the plot either. 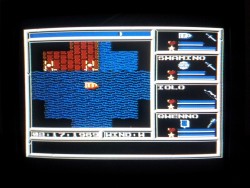 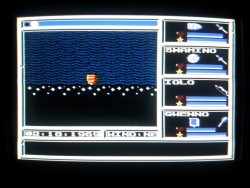 I buy a skiff for the bargain price of 100 gp in Serpent’s Hold and set sail. The skiff can go anywhere in this version with the limitation that the world here has edges removing some of the shortcuts. This is a pity as those shortcuts would be useful with a game that runs at this speed. The skiff does have the advantage of being carryable through moongates which may offer a shortcut for all these shrine quests.

When I get to the Isle Of The Avatar, I originally thought I must be in the wrong place as I was face with a building and a locked door. I had to pick the lock to get in, then use a skull key (bought in Serpent’s Hold) to get through another and then found the codex in the next room. It’s about this time that I realise that none of these items I’ve just used wear out so when I bought a pile of lockpicks expecting to need them all and more later in the game, I may as well have bought the one. Similarly I bought a load of food at one point but it doesn’t seem to serve any purpose – I might gain some health for eating it but I can use my tent at any time for that anyway. Aspects of the game like this do make if appear to be somewhat incomplete. On those lines, there are poison fields everywhere except they look practically the same as the normal ground making it all too easy to get poisoned by mistake. There is no animation for arrows either so we get a sort of travelling sparkle effect in combat all the time which looks quite strange. 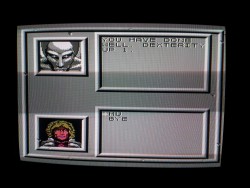 After completing my first shrine quest I head for Yew. This seemed like my best bet as I’m trying to join the resistance and was told in Britain to ask at the Arms Of Justice. I learn the password here as well as the mantra of Justice and am planning on tackling that shrine quest next.

I’ve had a good bit of time with this game now. It certainly improved with the sound off and is considerably better than I was expecting. The Ultima 6 engine produced my favourite games in the series and the idea of Ultima 5 being ported to it holds a lot of appeal. I wish it had been done on a more powerful system as the NES clearly wasn’t up to the job but it’s not so far off that there isn’t still some fun to be had exploring the world and towns. I expect my patience is going to be tested severely going back and forth on all these shrine quests next – I’ll be lining up a stack of podcasts to get me through it.