All the missing posts are back on the site now (minus some images) + I spent ages tonight fixing email delivery which I discovered was broken. Hopefully I can recover those images but everything else is restored once again. The last job remaining is to do another backup which thanks to a quirk in the software will mean downloading the entire site again. That’s scheduled to run overnight though which means I can at long last get back to the Ultima 6 playthrough. I’ve not touched the game in nearly a week while sorting this out but will do my best to remember where I’d got to. 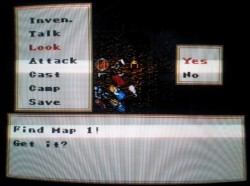 To recap, the problem I’d run into some weeks back was dragons and lots of them. I couldn’t even make it to the entrance of Destard, let alone plumb it’s depths for the dragon eggs I needed to progress. I had to level up but rather than doing this through needless grinding I headed for the giant ant mount in the north-east to search for one of the other missing map pieces. This worked better than hoped as the ants offer little threat but plenty of experience. I’d got to level 7 by the time I left meaning I could cast the invisibility spell which I hoped would get me through Destard. 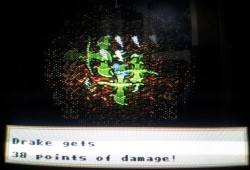 The invisibility spell did indeed stop all enemies from attacking my party while leaving me free to attack them back and as such did provide the means to tackle Destard. It wasn’t perfect though as it tended to wear off on my party members quicker than myself. Also all the enemies still followed me around even though they didn’t attack so I was soon surrounded by swarms of drakes and dragons. With no way to exit combat and run away the combination soon led to all of my party being killed off and the Avatar having to tackle Destard single-handed. 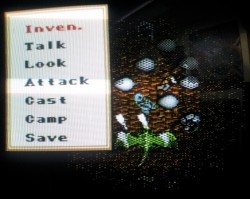 Thankfully, the Avatar is by far my most potent attacking force so this wasn’t all that much of a handicap. There was some reloading required when invisibility ran out at inopportune times but I managed to make it to the bottom level and purloin the eggs. A quick suicide later and my party were all resurrected and ready to search for more map pieces. 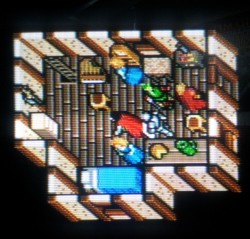 Destard has proved to be by far the hardest location in the game and gathering the rest of the map pieces was just a case of traversing Britannia completing the various quests. About the only difference I noticed was that on the PC I would have to move the harpsichord to reveal the trap door in the room above but with no move command on the SNES it had already been done for me. 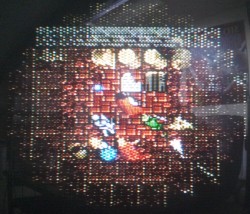 Once I had the 8 pieces, I headed back to Buccaneer’s Den. I was outright told where to look for the island with the buried treasure which isn’t the way I recall it going on the PC as it completely removed the necessity to build the map at all. At any rate, I followed the directions and grabbed the other half of the tablet. Something I didn’t do in hindsight is pick up a fan from the same room to control the balloon later in the game. I don’t recall seeing this so maybe it’s not in the port but I expect I’ll be making another trip back down through this particular dungeon to retrieve it later.

I didn’t fancy dealing with more dragons so I skipped Hythloth and moon orbed my way to the gargoyle realm after speaking to Mariah. I’d got as far as recruiting Beh Lem into the party after eventually figuring out how to dismiss a party member to make room for him (this isn’t where you would expect in the conversation tree), and had submitted to wearing the amulet of submission.

There is still plenty to do but I’m closing in on the end of the game now. One more concerted effort should be enough to finish it off and I’d hope there won’t be such a big gap between posts this time.