I’ve still not managed to start up again on Ultima 5 so instead I’ve dug out the negatives and proof for another Ultima advert:- 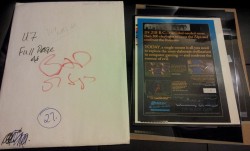 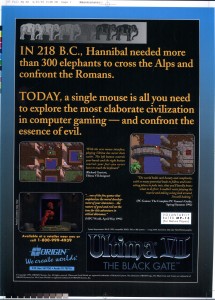 This is dated 20th April 1992 which would have been 4 days after the game was released and sells Ultima 7 on the basis of it being easier to play than confront the Romans with elephants which is hard to argue with. Ultima 7’s all mouse interface was way ahead of anything else I can think of at the time and still holds up well today, inventory shuffling aside.

It’s quirky but I reckon this advert did a decent job of conveying several aspects of Origin’s latest epic in a small number of words. It was ultimately used on the back cover of Computer Gaming World and presumably other magazines at the time with an alternative all black advert following on some time later.

The proof is marked bad on the front of the envelope which usually means some of the colour separation isn’t correct going on those I’ve seen before. The negatives for all these adverts come in four plates (3 colour + 1 black) which clearly gave scope for things to go wrong if something was left off of one layer. In this case the animal behind the T of Today is far darker than in the final version which can be found on the Ultima Codex.