When I last posted about this game I’d come to an abrupt halt when one of the dungeon ladders went missing. At the time I wasn’t too keen to try again as I’d been playing most nights for a week to get that far. However, I wouldn’t be doing this blog without a stubborn/obsessive streak which took over a week or so later and I decided I should give it another go.

That still didn’t mean I was all that keen and it’s taken long enough since for me to get back to it. I’m now playing on a NES emulator and at 2x speed the game has proved to be a lot more playable than it was on real hardware. At this speed, the controls aren’t always especially responsive but movement is much improved and it’s a lot more like the sort of speed an Ultima should play at.

Retracing my steps was still a largely mechanical process but at least I knew what needed to be done this time around. I headed down through Covetous to get the mystic arms at the first opportunity before getting back to relearning all the mantras. 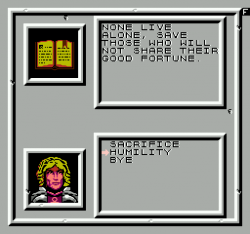 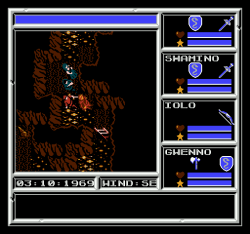 Something I didn’t try first time around was taking on more than one shrine quest at a time. I’m sure this wasn’t an option on the PC but after finding it worked here I only made two trips to the Codex which saved ages. What I really wanted to do was head into Deceit and see if my missing ladder would show up this time around and I’m relieved to say that it did. After putting off the replay for so long, I had a maxed out party and the first of the shards after maybe 2 and a half hours. That’s a lot of retracing but better than I thought it was going to be and it could have been a lot worse. From what I remember of Knights Of Legend, it near took that long just to get between save points. 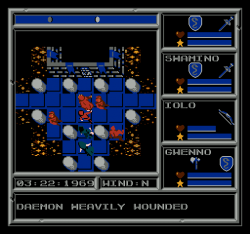 I found that I was still missing the Hythloth dungeon password. One of the few places I’d not explored was Blackthorn’s palace which seemed like a likely spot so I headed there next. I was curious to see how this version would handle the encounter with Blackthorn. In the original release, Blackthorn would permanently kill off one of your party if you weren’t a member of the Oppression. His actions are less drastic here and he sets 4 demons on us instead when I can’t provide the password. At this part of the game it didn’t slow my group down a whole lot and I had free rein to explore after this. 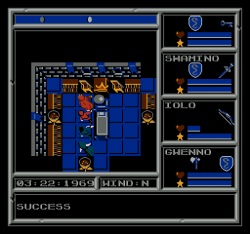 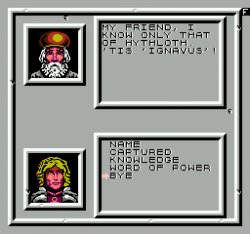 I take the opportunity to grab Lord British’s crown and find the last member of the council languishing in the prisons who provides the needed word of power. 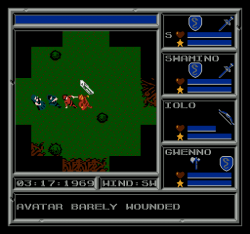 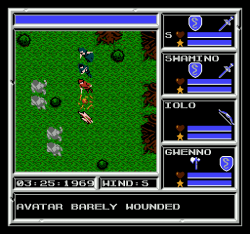 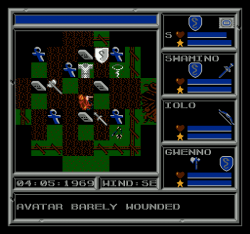 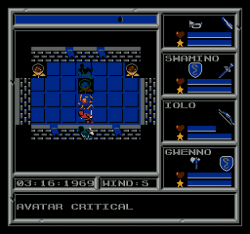 After this it’s been nearly all dungeon crawling. The dungeons can get extremely convoluted with many routes requiring constant swapping between floors but having a full set of maps before you even start the game makes it all very easy. It didn’t take too long to retrieve all the gems, banish the Shadowlords and grab the amulet.

The lack of challenge is something that’s really hit home playing this second time around. Combined with the lacklustre dialog and slow movement speed all the life has been sucked out of the original classic. What’s left is a game that requires so little thought that it can be played on autopilot while watching a movie – not a good sign when I’ve got it running at double speed.

Having said that, the gameplay is inoffensive and not that bad a time killer once that extra distraction is thrown in to keep your brain otherwise occupied. It’s just as well as even with maps, the dungeons are large enough that it’s taken me about another 90 minutes to get this far but all I have to do now is raid Stonegate and then head down through the final pair of dungeons.