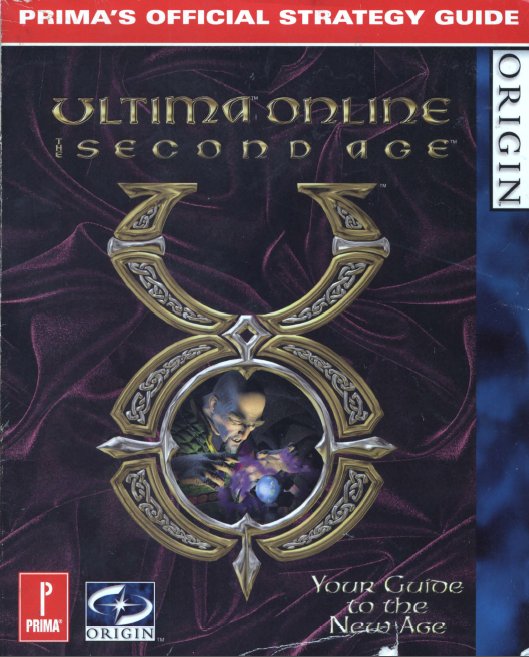 This was published by Prima in 1998. It’s more or a less a rehashing of the first Ultima Online guide and large chunks of it are taken straight from the first book. Since so much is repeated I’ll just mention a few of the new sections.

Ultima Online had clearly evolved in the year since the first guide and there is plenty of new advice in here. A lot of it is to do with player vs. player combat which I gather was a big issue for Ultima Online at the time. It looks like changes were made to the game to make life harder for evil characters and combat this.

There is a large guide on how to create and run a shop in the game, which sounds a little mundane to me but the person writing it clearly enjoyed this aspect of the game. The guide also mentions that most shards now had player created towns and there was also a trend for people to play other races even through the game didn’t support this. This resulted in some shards having towns full of people pretending to be orcs.

There is a story so far section with news of events that have happened on all the shards, such as twin liches attacking shrines.

The second age added a new lost lands area and this guide describes the methods of getting to these lands. There are some new creatures in the bestiary but there is surprisingly little mention of the new areas in the book though and the only map is found on the pullout. All the town maps are gone completely, presumably as they would have evolved to be different on every shard. There are still maps of the dungeons however (including the new ones) at the end of the book.

This book had more to fit into the same number of pages resulting in a few cuts from the first guide. The original was arguably the better of the two because of this but they are extremely similar. It’s definitely aimed at new players and you wouldn’t want to have paid full price for this if you were a UO veteran wanting to learn more about the lost lands as there are a few pages that would be relevant.