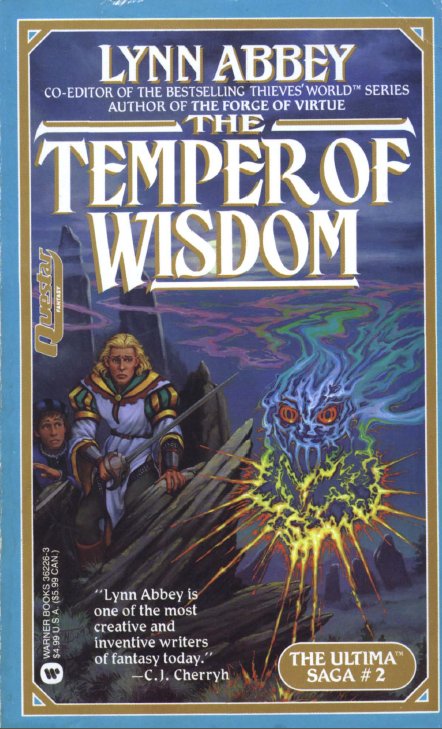 I’ve been away for the last week, but I took Temper Of Wisdom with me and finished it off last night. This was published by 1992 by Time Warner, written by Lynn Abbey and is the sequel to Forge Of Virtue. I bought a cheap sacrificial copy to scan in and the pdf is now in the downloads in reasonable quality. If you would rather own the real thing for not much more than the price of postage, I now have one spare and slightly squashed copy.

Temper Of Wisdom picks up at the end of the last story with the band of adventurers returning to Hawksnest. I’ll keep the major spoilers to this paragraph and quickly summarise the plot. The early stages involve Jordan struggling to regain his sight which he lost at the end of the previous book. The main part of the book deals with events at Hawksnest where an Inquisitor has moved in, turned the place against Balthan and is more or less running the place. He wants Althea for his wife and enthrals her with a form of black magic and turns Lord Hawksnest against his two sons in the process. They escape from Hawksnest only to return to free Althea. Whilst rescuing Althea, they learn that the Inquisitor is in league with the wraith Nosfentor and that he has been given a task to find a Sandalwood box containing notes about the disappearance of Lord British. They then set off after the box, killing the Inquisitor in the process. At the end of the book Jordan and Darrell return to Hawksnest where their father is ready to accept them back, but they are not willing to rest yet and want to help to return Lord British to his throne.

The early story was quite slow moving and the main characters not especially likeable. In these stages the party are a dreary and depressing bunch and about as cheerful as they look on the fairly awful cover of the book. The protagonists did evolve and grow on me during the course of Temper Of Wisdom though and I got far more into events after the first 100 pages or so.

The novel was less Ultima-esque than Forge Of Virtue, with fewer mentions of names and places familiar from the games and little travelling around. The story was better structured and more believable as a result of trying to fit less of these references in and it improved on FOV. I’ve certainly read better fantasy books but I wouldn’t have been sorry to see the series continue from here. It just about got the characters to a stage where I wanted to follow them through some more tales. This was a far better place to leave the series than the end of the first novel at least and I can live with it ending here.

You would have to be a real Ultima fan to want to read the Ultima Saga books in all honesty. Fantasy isn’t exactly my usual area of reading but I can think of plenty of books that are far better in their own right than either of these two. As an Ultima fan, neither of them are as much fun as the Avatar Adventures books, but they aren’t anywhere near as bad as some people had led me to believe either.

According to the author, a new editor was assigned to the project after the initial two book deal. This editor didn’t think that they should be stooping to publishing gaming tie-ins and Temper Of Wisdom was badly distributed meaning that no one bought it and it killed the series. It’s a shame as there are definite signs that the Ultima Saga was headed in the right direction.