It’s been about a year since Stepehen Emond released Ultima – The Ultimate Collector’s Guide after a successful crowd funding project on Rockethub. This was followed later last year by another successful funding campaign and a December release of Ultima Online – The Ultimate Collector’s Guide + a 2013 edition of the companion book covering other Origin series. I’ve been meaning to do reviews of these for some time but this has been severely hampered by the speed of international mail meaning that I only got my hands on them a week back. I can hardly complain when I didn’t pay the postage however as I have never seen so many stamps on a parcel in my life. There were so many they wouldn’t even fit on the front and ended up spilling onto the sides – I should have grabbed a photo but you’ll have to make do with one of the books themselves:- 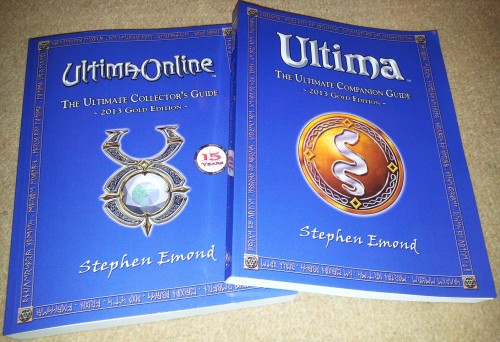 I’ll have a look at the UO guide in this post although it has to be said that these aren’t the easiest of books to review. It’s the Ultima Online equivalent of the Ultima Collector’s Guide so if you’ve seen that you will know what to expect here which is basically lists of near enough every game, book and collectible pertaining to Ultima Online. There is also coverage of Lords Of Ultima, Ultima Forever and various unreleased Ultima Online games with details and photos for near enough every item. In short, if you are into collecting Ultima Online memorabilia of any variety this is the book for you. Just as with the Ultima guide this is squarely one for the collectors and not something you can pick up and read as such. The exception is the excellent historical notes introducing each section which give a history to the development and/or story of each entry in the series, including those which were never released.

As an incurable collector myself and having lived with the original 2012 Ultima guide for near enough a year, I have found it extremely useful to have on hand if I’m searching Japanese websites for Ultima odds and ends. It’s not something I’d use often but identifying some of these items would be a nightmare without it. Now I know my way around the sections I can usually find whatever I’m looking for in seconds. Also, when I want to know if that item on Ebay really is complete in the box, or exactly which version it is I can find everything I need in the one place. The other major use is that it provides a list of things to put on your collecting hit list. I can probably blame/thank the author for getting me collecting some of this Japanese stuff in the first place. Ultima Online doesn’t fall into my collecting niche so much so I was more just curious in this case which may save me from any additional costs this time.

Having said that there is some nice stuff in here that I wouldn’t say no to. I was fortunate enough to get one of the 10 colour guides on the funding campaign and the photos of all the items look great, much clearer than I expected. There is exhaustive coverage of all the different releases for each game but my favourite items tended to be in the later sections with some of more outlandish collectibles given away at fairs or sold directly. The UO snow globes are particularly cool but I’m a sucker for anything you can drink beer out of so one of these steins would do me nicely :- 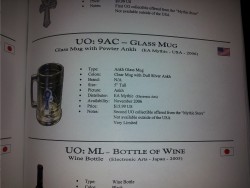 On the flip side, there are some Lord Of Ultima collectibles which I wouldn’t wish on anyone:- 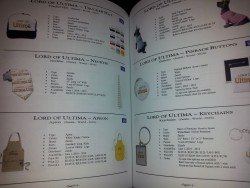 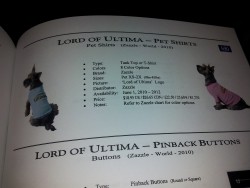 That has to be one of the worst ties I have ever seen in my life and who on earth thought there would be a demand for Lord Of Ultima aprons? I’ll draw particular attention to the pet shirts which are never a good idea under any circumstances. On the other hand if anyone were to ever sell a Silencer pet outfit complete with helmet I may just consider cat ownership.

There are plenty of other curious items in there, perhaps less so than in the Ultima guide but that just may be my personal collecting preferences showing through. If you want to see the rest of them you’ll have to buy the guide. It’s an incredibly exhaustive piece of work and I can imagine how much time and effort will have been involved in putting it together. It’s clearly got a relatively narrow target audience but if you are one of them the £18 on Amazon is a snip.