One of the Ultima collectibles that I’ve been after for some time is an ankh paperknife which was a trinket included in some Japanese editions of Ultima Underworld. These aren’t all that uncommon but it’s still taken me ages to get hold of the FM Towns edition which after a lengthy sojourn in UK customs arrived yesterday. Now it’s here, I thought I should take a look at it:- 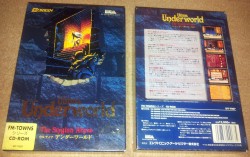 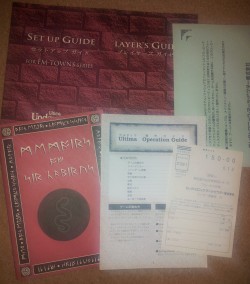 The box is a bit smaller than the PC release with the original cover art reduced in size drastically and now viewed as though through a hole in a wall. This wall takes up the vast amount of real-estate on every side of the box. Despite the small box there is still a full set of manuals, all translated into Japanese except for the occasional bit of English. 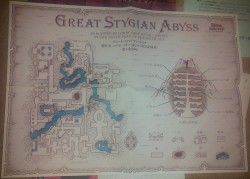 More interesting than the manuals is the map which has been rearranged and uses different colouring. It’s had some embellishments such as edges around the rivers and central volcano to make them look raised. The water has a different ripple effect also and the whole edging of the map has been changed. I’m not sure that the 3D effect doesn’t look out of place but after 20 years I’m extremely used to the original map. 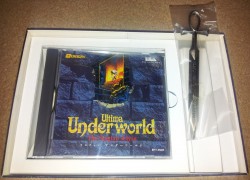 Underneath all the manuals, the game itself is on a single CD with the paperknife being every bit as nice as I’d hoped. Outside of some of the cloth maps it’s easily the best looking Ultima trinket although it does bear the name of Electronic Arts on both sides which may put some Ultima fans off. This is in English on one side and runic on the other.

Of course, I’m not someone who likes to get these games just to own them and I did at least attempt to have a go at playing it. This didn’t get far as the game consistently crashed UNZ just as the intro was starting. Judging by this timing, it would seem to be an issue with CD audio but I couldn’t find a way around it so I won’t be able to start this up at least for now. Allegedly, the game is an exact copy of the original but there is at least a slight difference with the aforementioned CD audio which I can at least listen to.

The CD-Audio consists of all the speech from the introduction sequence plus an original piece of music to end the intro. I was expecting the speech to be a higher quality copy of the original which is almost true but not quite. For a start the tone and post-processing is different, with the lines sounding slower and deeper with more pronounced reverb. Alterative recordings must have been used or roles reprised for a second reading of the lines as the words aren’t always the same either. For example on track 41 “until I hear Arial’s voice from within” becomes “until Arial’s voice do I hear from within”. They may not even be the same “actors” in all cases but they are doing a good impression if not. The curious can download all the audio in a rar from here. I especially recommend tracks 5-7 for some fine Shakespearian acting from Garamond.

The final music track is very reminiscent of the music from Ultima 1-3 on the FM Towns, it might even be the same but I’d have to go back and check to say for sure. It’s inoffensive enough but I’d rather hear the original theme on an MT-32.

I’d love to be able to give the game a go. If anyone has managed to get this running on an emulator and can offer some advice, it would be much appreciated.