As I write this, the Underworld Ascendant kickstarter is about to go into its last 3 days and hopefully a late rush towards some more of those stretch goals. I’m obviously excited to a see a sequel to a game that I’ve frequently described as my favourite of all time and it really deserves a bit more cash than it’s brought in so far. If you agree, please head over and pledge a few dollars towards the cause.

I thought I should do something Underworldy and decided to have a look at the PS1 port of the game that was released back in 1997.

Despite being critically acclaimed, Underworld wasn’t a game that received many ports and the only one released outside of Asia was a Windows Mobile release for Pocket PC’s of all things. A Sega CD version was announced at one point but it never made it to release. This means I’m stuck playing in a foreign language on the PS1 which is why I’ve never played it prior to this.

The introduction is now in FMV with newly drawn art and voicing. This is a shot for shot reproduction of the original and I really quite liked it. The acting sounds far more convincing in Japanese than it ever did in English but I’m hardly the person to judge when I don’t understand a word of it. I really like the way this has been handled but I may have been less impressed if I was coming to this as a new player – you could do a whole lot more with FMV after all. 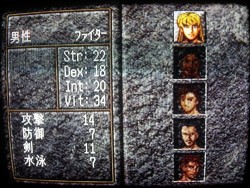 I struggle my way through character generation with Google translate not having an easy time picking up characters off the screen. All the usual options are there including an easy mode which I select under the circumstances. There are some new portraits for the Avatar, many of which look a little effeminate if you ask me. My first thought was that I’d chosen the wrong gender until I spotted a moustache on one of them. 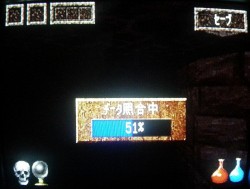 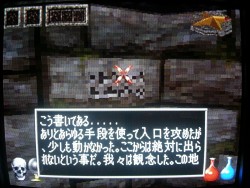 Having struggled through character generation, I immediately set out to save my game so I don’t have to go through it all again. There appears to be only one slot available which could be a handicap if so. My main concern would be the speed of saving which must clock in at 30 seconds plus. You definitely wouldn’t want to overuse this feature and I expect saving and loading would be potentially tiresome later in the game.

The abyss is instantly familiar at least and most importantly full screen. The PC original had an extremely small viewing window due to the hardware limitations of the time. Flash forward 5 years and the PS1 has basic 3D acceleration to take advantage of and it certainly improves things. I’d be lying if I said that the most has been made of the hardware. The same textures have been used as far as I can see and it’s not a whole lot better looking. The PS1 wasn’t exactly a 3D powerhouse but it could do more than this – this may be a prime reason why this port never made it out of Japan. 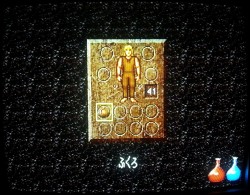 The interface is reasonably straightforward, especially considering I’m working without a manual I can understand. There are no analog controls so instead the d-pad is used with buttons to run and jump. The inventory is node based and I found it quick enough to move items around once I got the hang of it. Whilst in first person mode, holding down one of the shoulder buttons brings up a pointer allowing items to be examined or picked up. A big time saver introduced in the PS1 port is automatic key use which should save players from a lot of fumbling around in their inventory.

Considering how much the original was designed for mouse use, UW’s controls made quite a smooth transition to console. I expect the average modern gamer would have less grief on the PS1 than trying to cope with the odd mouse control system used on the PC. 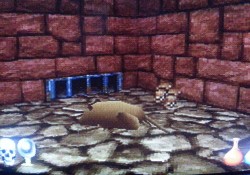 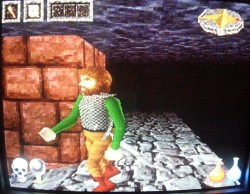 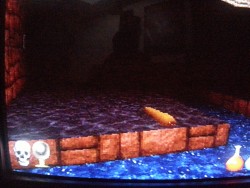 The biggest difference to the environment is that all the sprite models of the original game have been replaced by all-new 3D ones. Some of the original UW sprites were pretty appalling (e.g. the bat that looked to be about a dozen pixels) but these were much improved in the sequel. Time hasn’t been entirely kind to most 3D modelling of the mid 90’s and these new models do look basic and cartoonish. They don’t move around the world smoothly either and give the impression of being pre-rendered in which case I’d far rather they had skipped the 3D modelling part and just redrawn everything the old-fashioned way. Most of them don’t look too bad – the giant rats are kind of cute, looking more like giant mice. The rotworm is possibly the worst and looks more like something left behind by one of the giant rats. 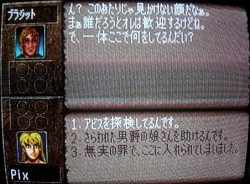 The conversation system isn’t something I explored at any length for obvious reasons. The character portraits are tweaked but other than that I would guess that the conversations have been faithfully reproduced as there didn’t appear to be any reduction in options.

I set out to explore the first level in full and have to say that I liked what I saw of the game. It moves fluidly and everything is exactly as I would expect it to be. In fact I didn’t spot any aspect of the game that played differently to the PC. The audio has been redone sympathetically on more modern synths with some digitized samples added in. With the full screen graphics, it arguably enhances the atmosphere of the original.

Combat still has the three varieties of swing except these are each mapped to different buttons when the weapon is drawn. I soon found myself using the familiar hit and run tactics and the different control scheme was proving no handicap. In fact, I think it was an improvement over mouse and keyboard.

I got as far as half way through the second level where I succumbed to a headless while trying to figure out how to fly up and down. I never did figure this out but assume it must be possible. This did mean I got to see an all new FMV where the player regenerates thanks to the silver sapling back on level 1.

I had a great time re-exploring the familiar locations in this new format. I’d heard quite negative opinions on this port prior to trying it but what I’ve seen played fine as far as I’m concerned. I’d be surprised if there was a better first person RPG on the system – this is still every inch Ultima Underworld after all. It’s so faithful a port, you could argue it’s more one for fans of the original game – while the graphics and audio have been given a gentle facelift it may have been technically underwhelming at the time. The open gameplay and foreboding atmosphere is still there though and I would dearly like to have seen an English language release of this.

I’m probably going to press on a little further before I give in but doubt I will make it too much further. There are enough quests requiring conversation that I expect to come to a grinding halt with the language barrier sooner or later. In the meanwhile, there is a full speedrun on Youtube courtesy of dandandan5 which I’ll link to below:-