If anyone were to ask me what the rarest game I own is, I can think of a few possible answers but only one of those passed so far under the radar as to seemingly carry no market value despite being from a famous developer. That game is Uncle Henry’s Mindblower, also known as Uncle Henry’s Playhouse outside of Europe. 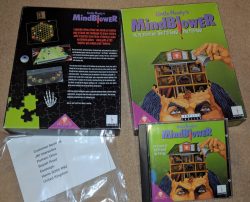 This was the fourth game from Trilobyte Software who had hit the big time immediately with their first release. The 7th Guest, perhaps more than any other game, sold the CD-ROM format to PC gamers in the early 90’s. It also had all the tropes of that wave of FMV games with simplistic puzzle based gameplay tied together by all the video but this was cutting edge stuff at the time and players lapped it up in large numbers. In a dual pack with Dune, it was the first game I ever bought and played on a CD drive.

The inevitable sequel arrived in the form of The 11th Hour which used near enough the same formula but upped the technology stakes being the first game I ever saw to run video at 30fps. This sold well but considerably less so than The 7th Guest.

Not to be put off, Trilobytes third game rehashed the exact same formula but no one really cared at this point and Clandestiny would only sell in tiny numbers and not that many people have even heard of it. This should really have been the end of it but Trilobytes next game (Tender Loving Care) was costing so much to produce that they needed a cash injection which is where Mindblower comes in.

Getting this game running these days is not all that simple. It refused to run on anything newer than Windows 98 and even then glitched if I didn’t use an older graphics card. I needed to find a patch on the web to get it to start at all even on a period appropriate PC and when you finally do get it to run, the speed of some of the animations is all over the place. Don’t even think about running a screen capture program at the same time either or it’s instant blue screen of death. Sorry but that means more photos of CRT’s which are becoming a staple of this blog. 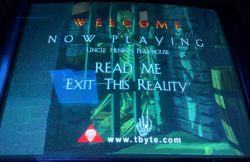 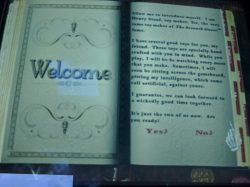 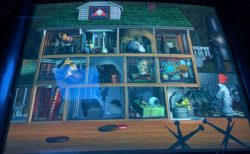 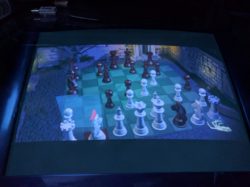 Uncle Henry’s Mindblower runs with Trilobytes existing formula of puzzle based gameplay, except it does away with all the FMV parts which were of course the main motivations for playing their games in the first place.

The game sees the player presented with a doll house crafted by Henry Stauf, the evil toy maker of The 7th Guest himself. Each of the rooms in the doll house contains a puzzle from the earlier games. Beat all 12 of these and you are rewarded with a 13th original puzzle in the attic. The selection of puzzles is mixed with some easy and some more challenging but anyone who has played Trilobytes previous games will of course breeze through all of them.

The animation is mercifully quicker than I remember in The 7th Guest so when moving chess pieces around, there isn’t a huge wait. The whole presentation is considerably less slick however given the highly variable frame rate that all these animations play at. 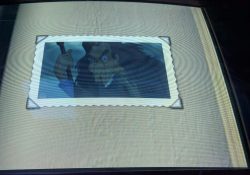 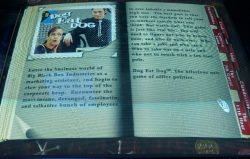 There are no videos for walking around the doll house in this game. Instead nearly all the FMV is saved for adverts for Trilobytes earlier games + a couple of mentions of their forthcoming titles, Tender Loving Care and the never to be released Dog Eat Dog. These adverts are stored in a book menu system which also has the instructions for each puzzle.

It took all of about 30 minutes at most to play through to the final puzzle. This offers something new at least and involves guiding Stauf around the doll house into the same room as each other guest one by one. When you find/murder each guest another door opens somewhere else. This puzzle is simply about doing everything in the correct order so that you don’t get trapped.

I can’t say this took all that long to solve either and the presentation was extremely basic with little cardboard cutouts representing each character. It’s a step back from anything in The 7th Guest from 4 years earlier. 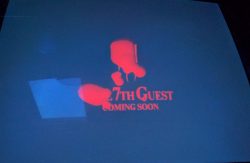 Once beaten the dollhouse bursts into flame and there is brief mention that The 7th Guest 3 is coming soon and that’s it. I gather 7th Guest 3 was to be pushed into production to be a further money spinner for the struggling studio but the game would never see the light of day either.

Given all the advertising it contains and the reuse of assets, Uncle Henry’s Mindblower comes across as more of a demo/sampler disc to drum up interest in The 7th Guest. On that level it would be passable if it were given away with magazines but this cost £15 to buy which is presumably why so few people took Trilobyte up on the offer.

As such, if it’s famous for anything (which it isn’t), Uncle Henry’s Mindblower is possibly the biggest failure in PC gaming history allegedly selling 27 copies in the US and 176 copies worldwide which is where the rarity stems from. I’ve little doubt that many more copies were manufactured and have found their way into circulation since of course but there still can’t be many of them about. Value is about both supply and demand of course and in this case the demand isn’t there. My copy was all of £1 in an open Ebay auction a few years back and having now finally played it for the first time, I’m not so sure it was worth it.

I dug around in some magazines to see what the opinion at the time was like. It wasn’t a game to warrant a full review by the looks of it, only getting a mention in the minor releases. PC Zone were never one to hold back on their opinion and gave it a pasting in their August 97 issue:- 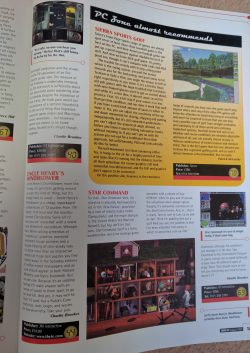 The slightly more refrained folks at PC Format were equally scathing in September 1997:- 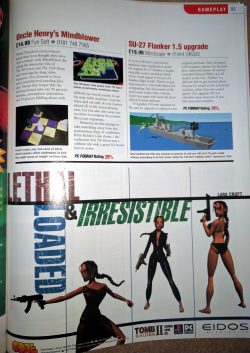 And those were all the mentions I could find at all. Trilobyte wouldn’t publish another game after this, although Tender Loving Care would see a release by Afterdawn a year or two down the line. Trilobyte did resurface in recent years with a failed 7th Guest 3 kickstarter and releasing some of their earlier games on smartphones. There is still fun to be had with those earlier games and I do have a nostalgic affection towards The 7th Guest, whatever it’s shortcomings. Uncle Henry’s Mindblower has not received a modern port and for now at least remains mercifully and deservedly forgotten.