I didn’t get too far when trying to run this demo on Freedo a couple of weeks back. I’ve got the real hardware now though so I burned it to a CD to give it another go. Capturing screenshots off a 3DO presents a problem. I did try running the console through a video capture card which worked but caused a lengthy delay which would have made it unplayable. A few extra cables and I suppose I could have routed it through that and the TV in parallel but for now I’ve resorted to taking a couple of pictures of my TV with my phone.

The demo starts with a familiar FMV trailer. I was hoping that the FMV would be much better quality than on the PC. WC3 was the first game I ever played that used full screen SVGA FMV with any sort of fluidity. With only 256 colours and early compression techniques, this came at a cost with major compression artifacts. It probably does look slightly better on 3DO but it’s marginal if there is a difference.

After the FMV, I get to play the start of the game. I can’t go into the lift but I can talk to Hobbes, attend the briefing, etc.. What I really want to get to is the flying thanks to rumours from Loaf that this is quite different to the PC. 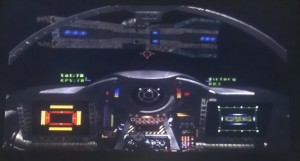 There are definitely plenty of changes in the cockpit. Firstly it’s a lot more colourful including full colour FMV in the VDU. The 3D engine runs really well and a lot smoother than I was expecting with more detail on the Victory than normal if anything. Also, the cockpit slides around the screen slightly as I steer which could take some getting used to. There isn’t any music but I’m assuming that was just to keep the demo size down.

The maximum speed of my Hellcat is now only 188. This does mean I can adjust speed a lot more quickly and probably makes sense. Getting up to full speed on Sega CD WC1 took ages. I’d be lying if I said I knew what all the controls were when I finished playing this but I got the most important ones from the help screen and it wasn’t too hard to change weapons and command my wingman. How I lock onto an opponent remains a mystery.

The mission itself is a simple patrol in which I come up against a lot of Darkets and one small capship (which I can’t recall ever seeing outside of this demo). This capship is a sitting duck but the explosions do look good with all the extra colours when I’m shooting it. There is a whole lot more debris when things blow up here also which is satisfying if a little unrealistic. I’d have to say this version definitely wins over the PC in looks. Where I do have problems is actually shooting anything. There seems to be a steep learning curve getting to grips with the different control systems every time I swap Wing Commander ports. My missiles get me through but if I’d had to shoot the Darkets with lasers I could have been playing this for some time. 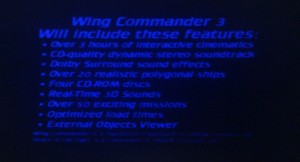 While I’m flailing around space trying to shoot them, these 3DO Darkets have a new taunt or two for me + a few manoeuvres I can’t recall seeing before. After clearing them from 3 nav points, I autopilot back to the Victory and the demo ends as soon as I ask to land. The flying in and out of the Victory at the start and end of missions appears to be missing completely presumably for performance reasons but it’s not a huge loss.

I expect there is nothing original to this demo over the full game but it does give a good idea as to whether it’s worth getting the full thing in the first place. Having recently bought it for 54p, I didn’t really need that question answering but I do think this looks good enough to justify hunting down a 3DO flightstick. I expect I could play it with the regular 3DO controller but if it’s really going to be fun this deserves to be played with a joystick. On that basis, I’ll save it for a while in favour of the PS1 version but with the VFX-1 arriving tomorrow, I won’t be looking at either of them for a while.