I should have known it was too good to be true but after briefly being reinstated on Google, this site has now been relegated down to page 20+ again for nearly all search terms. The net result once more is a huge reduction in hits and barely any referrals from searches. This is getting beyond a joke and I’m giving serious consideration to moving back to wordpress.com where my old site continues to fare better despite not having any content for nearly 6 months.

In the meanwhile, here’s a Wing Commander 3 review from the February 1995 PC Format. It gets a very respectable 87% with the main complaint being loading times which were a serious issue if you didn’t have more than the minimum RAM. I recall it taking a couple of minutes every time I started a mission on my minimum spec PC:- 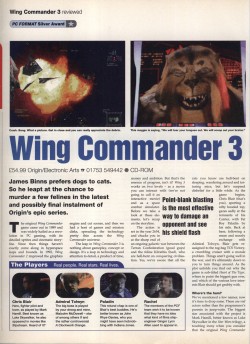 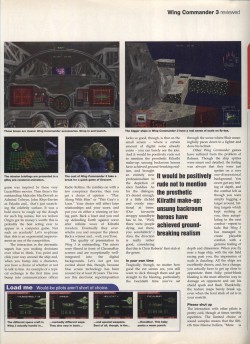 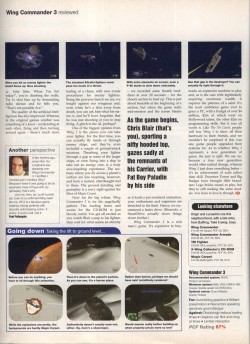 I’ve got to take the chance to give a shoutout for the Tex Murphy kickstarter. This is one of my favourite series of all time and one of the fundraisers I’ve been waiting for ever since it was announced. Starting with Under A Killing Moon, the Tex Murphy games were some of the very few to successfully combine FMV and gameplay, with The Pandora Directive being one of the best branching storylines I’ve seen in any genre. A sequel is long overdue as the series ended on a cliffhanger 15 years back, much to the frustration of Tex fans everywhere. I honestly thought this project might struggle but aside from some communication issues with whoever they have answering PM’s sending out mixed messages early on, it’s off to a great start having raised over 40% of the target inside 3 days. More wouldn’t hurt though and it’s definitely worth putting down a few $$’s.

I do wish all these campaigns could have spread themselves out a little as it’s a bit much for adventure game fans like myself. Pinkerton Road, SpaceVenture and Tex Murphy will all end up on the same credit card bill and it’s not going to be pretty. There is no way on Earth I could back another campaign at this point and I expect most adventure gamers are feeling the same. If Toonstruck 2 or any other similar project is waiting in the wings I’d suggest staying there for at least two or three months.