Gaming room #2 is slowly taking shape, although there is a severe lack of hardware at the moment as I’ve been concentrating on things like storage and furniture. Getting a large sofa-bed up my ridiculously narrow stairwell proved to be a tortuous experience but it’s now back in one piece and where I wanted it. I can’t say the same for a door frame I had to remove along the way but I’ll put that back another day.

So far I only have a couple of unfashionable 90’s consoles in the shape of the 3DO and more particularly for this post a CD32:-

The CD32 was advertised as the worlds first 32 bit console although in truth the FM Towns Marty beat it by a narrow margin in Japan. It was basically an Amiga 1200 with a CD drive but without a keyboard and was released by Commodore late in 1993. They had component supply issues which meant they couldn’t keep up with demand and went out of business a handful of months after the CD32 release resulting in the console being discontinued. There were no real standout games on the CD32 in its short life but it is compatible with the Amiga back catalog and there are numerous homemade CD’s which can be downloaded with hundreds of Amiga games on each. This is a major appeal for me and one of the reasons why it was up the top of my list to own. I’ve been having great fun with games like Gods, Xenon 2, Wizkid and Project X. 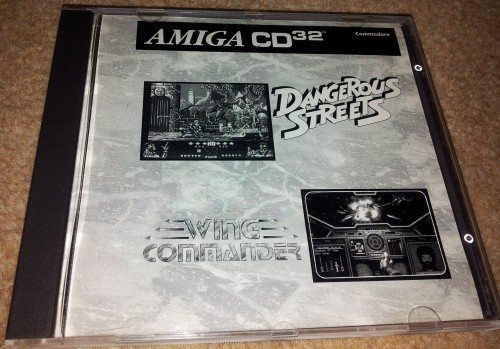 There is also the fact that on release the CD32 was bundled with an Origin game in the form of Wing Commander together with Dangerous Streets on a CD. I was expecting Dangerous Streets to be a Double Dragon style scrolling beat-em up but it’s more along the lines of a cartoony Street Fighter clone. I’ve not played it for long but from what I saw it is truly awful. Other content on the CD includes an FMV demo of Rise Of The Robots. This is not the most illustrious company for Wing Commander to be keeping.

I tried the Amiga version of Wing Commander earlier in the year which played well but suffered from a reduced colour palette to get the game to run on A500’s. With the improved hardware of the CD32, the game was tweaked to run in full 256 colour mode and now looks every bit as good as on the PC:- 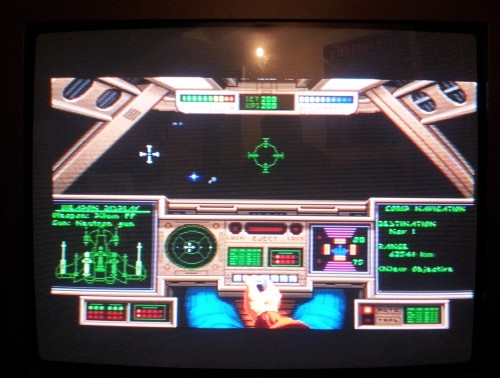 The downside is that even the CD32 still struggles for speed and isn’t really up to the job when there is a lot going on. Battles in asteroid fields drop to 1-2 FPS and it’s fair to say that playing this on the CD32 is never going to be a test of anyone’s reactions. The game is still Wing Commander in all it’s glory though with nothing cut or left out. The only change I spotted to the regular Amiga version was a grid system to put my name in at the very start to make up for the lack of a keyboard.

The loading times from the CD drive are noticeable but quick enough to still be palatable for a modern gamer. The Amiga soundtrack sounded great through a couple of decent speakers and a definite improvement to using an emulator. I still think it lacked the subtlety of the MT-32 but it’s not far behind.

The CD32 controller has 7 buttons + the d-pad and this proved just enough to make controlling the game intuitive. There are some quirks such as having to continually tap green to use afterburners since holding it down only gives a very short burst but it’s by far the easiest I’ve found any of the console Wing Commander games to control. I quite like the CD32 controller in general, it’s nice and large, comfortable to use and everything is in easy reach. On the down side, it does feel cheap and not exactly built to last + I always want to hold it the wrong way around whenever I first pick it up. 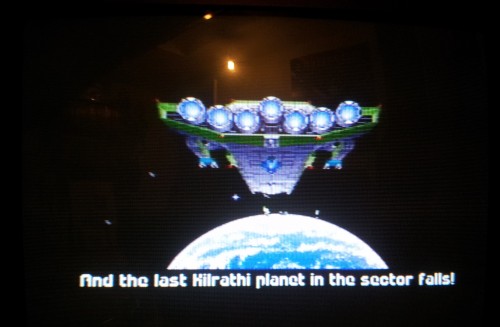 I played Wing Commander through to the end and this is yet another great console port. It’s the truest of all of them to the PC version, I just wish the CD32 had a little bit more grunt to get that framerate up. The 256 colour graphics looked spot on in this but I’m unconvinced that it wouldn’t have been a better game in 32 colour and running at full speed. As I also recall from the Amiga version, the asteroids were unusually deadly and had the unfortunate tendency to appear out of nowhere at times.

I ran into a few curious bugs such as when afterburning through asteroid fields, I would occasionally hit one and not get damaged but get bounced back about 50,000 clicks at warp speed. Odder still, in the penultimate mission, I found myself fighting an invisible Ralari which was inevitably tricky to shoot and I ended up smashing straight into it and blowing up.

Those bugs were few and far between. Even with the slow speed, I reckon this would still have been a brilliant game if you only owned a CD-32. If you had a PC as an alternative, then it doesn’t look quite so good and there were arguably titles that used the hardware better. It’s always fun to play WC1 again though and it’s becoming a habit this year with this being the 4th port so far. Each of those ports had something in it’s favour and I’d struggle to pick one over another but it was nice to be able to play this one on the original hardware. I still have one port left unplayed but the FM-Towns version can definitely wait until 2013.