I’ve finished my playthrough, and I was right about not having a whole lot more to say. It’s been basically the same game as I’m used to on the PC all the way. Even one of the slight changes I noticed in the last post reverted to form as escorted ships started joining the formation during autopilot. I’m not sure what the hitch was with the earlier missions. 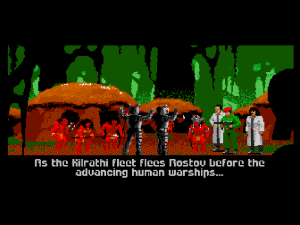 My wingmen have been marginally more useful than they were on the console ports and have stolen kills off me on several occasions. I still end up as the usual one man army but it’s nice to get some help. Balancing this out, asteroids are an absolute nightmare. I now understand why the Kilrathi thought asteroid ships were a good idea in WC3.

These Amiga asteroids have an exceptionally nasty habit of sneaking up from the sides in a way I’m not used to. They also appear completely out of nowhere and getting through a field of them is more luck than judgement at least when I’m flying. Whether that’s an emulation issue I’m not sure but completing Rostov was a nightmare. 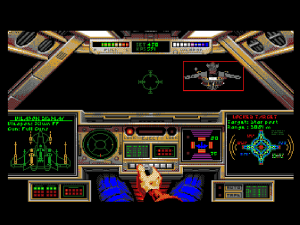 Of the 3 ports I’ve looked at, this was by far the closest to the original but I’d pick the Sega CD ahead of it. It has worse music and speed issues but the speech adds something that isn’t available elsewhere and it plays differently. This came across as a slightly inferior version of the PC game which would be fun enough if I didn’t have the PC original but doesn’t have much going for it as an optional alternative. All of these ports have been seriously impressive on their hardware though and I wouldn’t imagine Wing Commander could have been done justice on any of them before I’d given them a go.

That leaves me with CD32 and FM-Towns versions left to try, at least picking from what I actually own. I’m assuming the CD32 version is the same again with a full set of colours so I’ll be leaving that for a while. I’ve had a quick blast on the FM-Towns version and that looks far more interesting. It could well beat the PC version but I’ve already finished Wing Commander 3 times this year so it’s time for something different. Besides which, all my stuff from Japan has arrived so I’m going for another FM-Towns port in the shape of Ultima 1 from the Ultima Trilogy next.