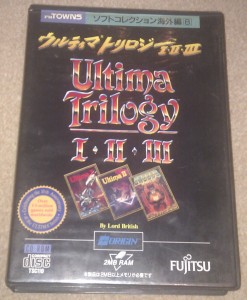 The Ultima Trilogy was published for the FM-Towns in 1990 solely in Japan. I’ve been hearing for years about the FM-Towns versions of the first 6 Ultimas but have never had opportunity to try them out before now. I’m still missing 4 & 5 but I’m sure enough auction searching will turn them up eventually. I’ll be using the UNZ emulator to play all of these which is reasonably stable and easy to use even without any familiarity with the original hardware. 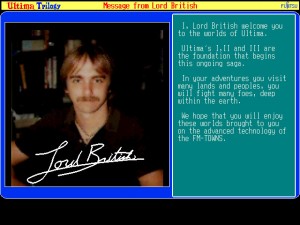 The FM-Towns was in essence a PC with some unique hardware and its own OS. This hardware included a CD drive long before they were becoming remotely close to being a standard here in the West. This gives any games on the system the opportunity to make use of CD audio and all that extra storage back when the rest of us were all using floppy disks. This is in evidence on the Ultima Trilogy right from the start with a CD audio introduction to the series by Lord British himself. This is a still image with speech rather than FMV but this was 1990 after all. I can’t help but think that those Origin dev’s recording the Wing Commander 2 demo gave a more convincing performance as Kilrathi than Richard Garriott does as Lord British here but it’s still a nice extra. Maybe it’s just me but the moustache he is sporting in this photo looks a little unusual as it’s pixel perfect straight. It gives the appearance or being drawn on afterwards with a square brush. This intro is already on Youtube for anyone who wants to see it. 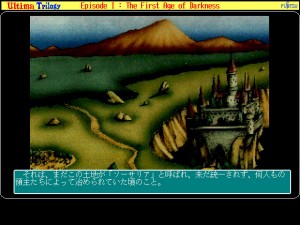 There are also separate executables on the CD with an introduction to each game. The games themselves come in both English and Japanese but these introductions are Japanese only. They have some nice CD music in the background and some full screen static graphics but I can’t say I especially like the artwork. This intro is also on Youtube already. 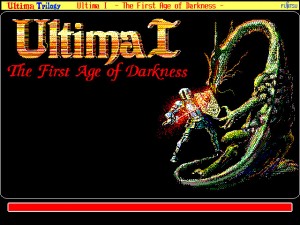 After the slightly dubious art in the main intro, the first screen when starting the game is more like it with the armour clad stranger holding off a dragons flames. 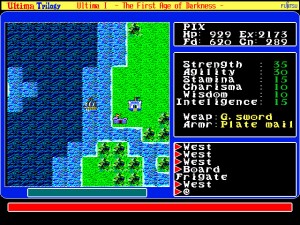 Character creation is the same as ever, although everything is a little more user friendly. Once in the game, the difference in graphics is pronounced from Ultima 1’s original tiles. The new tiles are hi-res (for 1990) with plenty of colour, if a little cartoony. It’s a big improvement which doesn’t stop there as there is also adlib style music throughout the game. This music is all original to the port and while not up to the usual Ultima standards is pleasant enough if bland. The main map music is an on extremely short loop which did start to get on my nerves later on. I’ve heard that the same music is used in all three of the trilogy and I’m hoping that isn’t true.

I should mention that I discovered that when capturing screenshots with UNZ it will overwrite all the old ones when starting a new session. All these early screenshots are from later in the game to fill in. 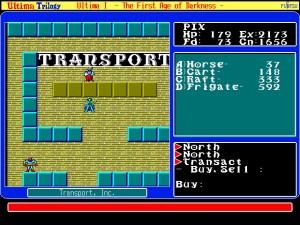 Towns are done in Ultima 2-5 style with a scrolling map rather than the original Ultima 1’s entire map on a screen. This makes them zoomed in by comparison but the layouts are the same so there is no difficulty finding my way around. 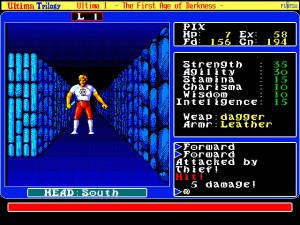 The gameplay is incredibly faithful to the original Ultima 1. It’s perhaps surprising just how similar in a major update like this. This means that the early stages involve lots of dungeon delving to try to advance my character to the point where the shops allow me to buy a ship. The dungeon graphics have received a complete overhaul with textured walls and large sprites for all the monsters. 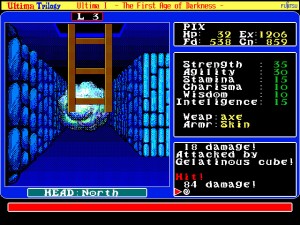 These sprites continue the cartoony theme of the game with T-Shirt wearing thieves and the like. In this first session, I’ve not ventured too deep into the dungeons only completing a single quest to kill a gelatinous cube. This cube was more of a gelatinous blob in appearance and promptly ate all my armour but I just about managed to kill it off. I’m looking forward to seeing some of the tougher monsters when I delve down to the lower levels but there is no way I would have survived trying that in these early stages.

The dungeons represent the biggest change in the gameplay that I’ve seen so far in that the monsters don’t move around (at least after I’ve seen them). They just lurk on a single square and if I’d had a range weapon at any point while dungeon delving I’d have been able to pick them off at a distance in theory. The snag with this lurking is they tend to attack from a side corridor as I walk past meaning that they always have 2 free hits before I can get an attack in myself. They also attack from behind closed doors which can leave me having to guess which door to attack if I have a choice. This all made the dungeons considerably harder than in Ultima 1. 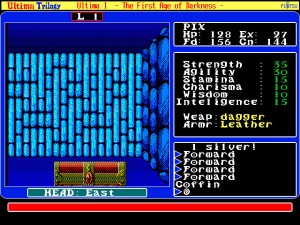 In other ports, I’ve been able to consistently raise my hit points by dungeon raids but I struggle to do much more than come out even in this. The dungeons are identical with each visit however so I work out a route around Level 1 of the Mines Of Mt. Drash which I farm repeatedly for gold and experience to get my character up to level 3. I occasionally have to use Lord British to raise my HP in order to keep going.

Most of my HP losses are on the main map, which has far more that it’s fair share of wandering monsters. These build up over time and are still there waiting for me if I go into a town or dungeon. They do vanish when reloading a game or if I can get far enough away from them but other than that I have to deal with them all later if I put it off by running away. 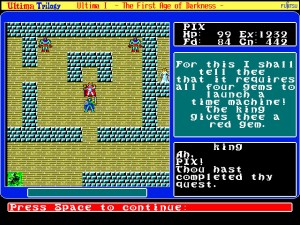 Once I get my character to level 3, the shops are getting better stocked and I’m able to buy a ship and start attempting quests. I decide to farm my stats up to maximum before I do anything else. 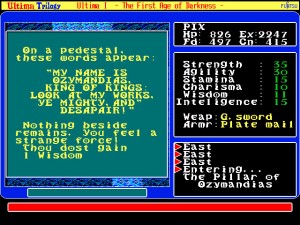 This means lots of trips between sign posts. The layout of the maps is the same as ever so I use tried and tested routes here to grab all the best weapons and by the end of the session have raised my wisdom and stamina to 99 and also repeatedly done one of the sign quests to get my strength into the 60’s. I’ve still got plenty more farming to do to build up my other stats.

One thing I discovered which wasted some time was that it’s possible to shoot your own ship if you try to attack a sea monster hiding behind it. This resulted in me being stranded on an island and I’d not saved in ages. If I’d exited the game the regular way, it would have saved automatically so this required a complete closedown of the emulator. I suppose I could have waited until I starved to death although there is no guarantee that I wouldn’t have respawned on the same island so this is definitely something to be careful of as it could mean a restart. 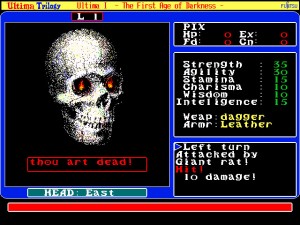 After several previous playthroughs, I know my way around Ultima 1 and expect another session will be enough to finish it off now that I’ve got started. I have found this considerably harder than the original version with an abundance of monsters in the overworld and tougher dungeons. There is no mechanism to reload a saved game once started and restarting the emulator is a lengthy process I can live without so I’ve been doing my best not to take risks. It occurs to me that I could have looked into using savestates but playing it as intended I have died off and had to restart from a respawn a couple of times. At least this version has respawning which I don’t recall being in Ultima 1 first time around.

There is no doubt that starting out in Ultima 1 FM-Towns has been tougher than normal anyway. I would have finished the original game in the time I’ve spent on this already and the port itself runs quite quickly so it’s not a case of waiting for things to happen.

Something I haven’t mentioned yet is the sound effects which are loud and over the top digital samples fitting in with the cartoonish theme. The games I’ve been reminded of all the time I’ve been playing this are Might and Magic 4 + 5. The cartoony monsters, the insipid music and the sound effects could almost be straight from either of them. I think the world of Xeen had a little more charm but I do love those two games so this isn’t much of a criticism.

From what I’ve seen this is a major upgrade to the original Ultima 1 but still incredibly faithful. I have slight issues in that it doesn’t look or sound how I’d expect for an Ultima but this has to be better than stick men and PC speaker beeps. The stationary monsters in the dungeons are strange though and a detriment to the gameplay. That’s my only major complaint so far and I’m hoping it won’t be carried forward into the other games in the trilogy. I’m really interested to see what the space section is going to be like and am hoping to see some Kilrathi ships to shoot down but that is probably optimistic. I would imagine that they will have to look less like Tie Fighters for copyright reasons at the very least.

I’ll probably do some scans of the documentation after I finish the game. Thanks to the Ultima Collector’s Guide, I know that I’m missing the paper maps that should have come with this so I won’t be doing those but I’ve got the manuals themselves. There is something to be said for blissful ignorance and it’s one of the snags of having the guide to look these things up. I’m not too worried about having yet more maps anyway as I could probably carpet one floor of the house in Ultima maps already. The one thing I’d really like from all the Japanese extras is an ankh letter opener.