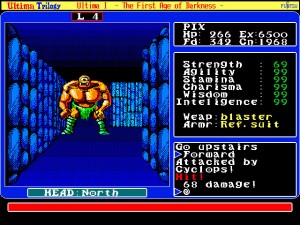 Half an hours more grinding away visiting sign posts and I had my character ready to face some dungeons. I’d been gathering all the various monster killing quests on my journeys so I could stack them together into a single trip. With a freshly purchased stack of ladder up and down spells I headed for the nearest dungeon.

The dungeons turned out to be 10 levels deep with all the usual monsters. Force fields are invisible on the FM-Towns so I couldn’t see them until I walked into them but other than that it was just like the earlier levels with nastier critters. I’ve put together a menagerie of everything I bumped into on this trip:-

This isn’t a complete set of monsters by any means but it must be the majority of them. 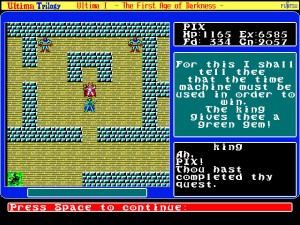 With all my quests complete, I headed off to see all the kings and collect the gems. It was then time to buy myself a space shuttle and head for the stars. 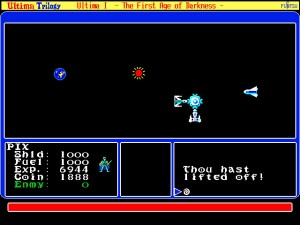 I have to say that I was a little let down by the space section. I was expecting something better looking but it’s not all that much different to the Apple II version. There is some really cool background music though.

The ships have different specs with the ship with low shields and high fuel being completely useless as it can only survive a few hits so the fuel is wasted. The other ship however has 5 times more shields and still has enough fuel to become a space ace in one trip and is clearly the one to go for. 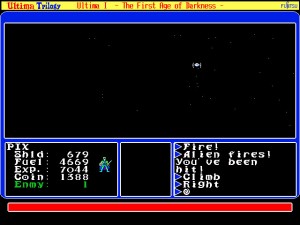 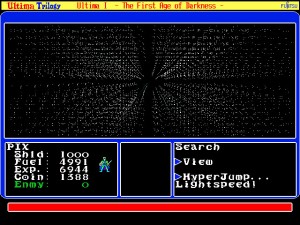 The view from the front of the ship is hardly upgraded at all. The Tie Fighters have curvy wings like the Tie Advanced instead of the regular version instead but they are still Tie Fighters. They do have a little face on the front when they get close enough which wouldn’t have fit with the Empire’s image very well. 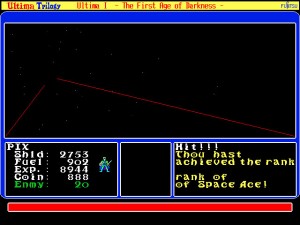 When I’ve killed 20 of them, I become a space ace. I head back to the center of the map to go back to Earth and the moment I swap to the overhead view I crash into the sun and die which seems grossly unfair. I do respawn back on Earth but with no cash or weapon it’s a struggle to get back to the nearest town and survive. 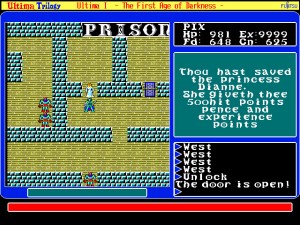 I build up my character a little and then try my hand at some princess rescuing. Thankfully for me, this turns out to be the easiest way of making money and experience ever. The layout of the castles varies in this game but I can get in and out of one of them only having to fight a single guard. Also, if I manage to rescue the princess I don’t even have to fight my way out. After each rescue she foolishly get’s herself instantly recaptured so after a half dozen dashing rescues I’m ready to take on Mondain. 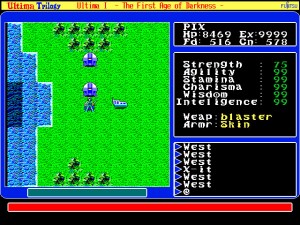 Finding the time machine takes me ages and I must have searched the entire world before stumbling into it. Just like buses, two come along at once.

Mondain is ready and waiting for me. There is some nice background music but otherwise the battle plays out just like any other version. 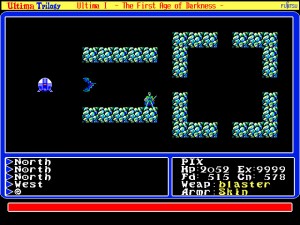 I end up chasing him in bat form all over the map trying to get the odd shot in until I eventually get enough hits to beat the game.

Some triumphant CD music kicks in after my glorious victory but I only get the usual text. You would think there would be a little more on a CD-ROM game but that’s it.

I have to say that I’ve enjoyed playing Ultima 1 again a frankly unhealthy amount. The extra challenge in this added to the fun and it’s already been worth the asking price of the trilogy just for this one game. The traditionalist in me says that one of the other versions is the one everyone should play but nearly all the gameplay is intact in this and it does look and sound so much better that it’s hard to make a case against it.

I’m really tempted to carry straight on with Ultima 2 but my VFX-1 has been sat unused all week which just isn’t acceptable. I’m dying to try Wings Of Glory out so that has to be next.