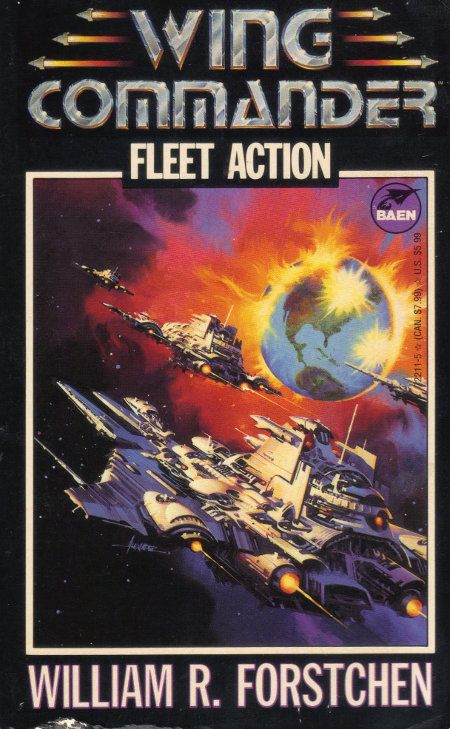 This is the third in the series of Wing Commander novels and was published in 1994 by Baen. It was written entirely by William Forstchen this time and picks up the story shortly after the end of the previous book. Once again we get to follow the adventures of ‘Bear’, but this novel also features at one time or another near enough all the major characters from Freedom Flight. It flits between characters with Hunter taking a leading role for large sections (before being killed off 2/3 of the way through the book), and Admiral Tolwyn + his pilot nephew Kevin also taking major roles.

Briefly the plot is as follows. Following on from the successful raid in End Run, Confed has used to same tactics to devastating effect on the Kilrathi. Their supply ships are seriously depleted and Confed are on the verge of winning the war thanks to the Kilrathi being unable to build new carriers. The Kilrathi come up with a tactic of offering peace with Earth, while secretly using the extra time to build a devastating new fleet in a distant system. Earth’s politicians buy into this ruse and start dismantling Confeds fleet, in anticipation of peace. The military aren’t buying it though and Tolwyn deliberately gets himself stripped of his rank so that he can organise a covert mission to find out what the Kilrathi are up to. Paladin and Hunter go into Kilrathi space and get pictures of the new fleet while Bear’s light carrier is carrying out surveillance. At the cost of Hunter’s life they get the proof they want and Earth is left is a desperate race to try to get its fleet online again. The book ends in a climactic battle on Earth, with Earth barely repelling the fleet thanks to the Marines boarding the Kilrathi super-carriers and blowing them up from the inside. This comes at the cost of most of the fleet, including using civilian ships as cannon fodder.

Large parts of the novel deal with the conflict between politicians and the military and I can’t say this part of the story appeals to me much. It seems to portray a very biased viewpoint of stupid and/or traitorous politicians against a military who knows what needs to be done but is constantly held back.  It’s the equivalent of an 80’s maverick cop movie where the straight laced boss doesn’t allow him to do his job. This middle section of the book plods on fairly predicatably with characters that aren’t detailed enough for me to care about. The characterisation was very simplistic throughout to the extent of being childish and I did get the feeling that this book was aimed at a much younger audience than myself. Things pick up again for the final battle although I expected a more original solution that attempting to board the carriers which would surely be an obvious thing to do. I can’t imagine why it wouldn’t occur to the Kilrathi when they see a load of marine ships coming straight at them.

I was hoping before I started the novel, that it would tie in with the start of Wing Commander 3, with the Concordia being destroyed at the end. The Concordia was badly damaged and could possibly have crashed later but it wasn’t explicitly mentioned so I’ll be curious to see if the next novel starts immediately from this point. Even without this, for a book that felt quite lightweight in the most part, it’s a less than cheerful conclusion despite the victory,  with many human occupied planets being made radioactive and their populations wiped out by the Kilrathi.

This wasn’t a bad book but I didn’t enjoy it as much as the previous ones. I’d probably have enjoyed it more if I’d just sat down and read the whole thing in one go. There wasn’t enough to hold my interest over a few days, when I was reading a little at a time.  For all that, if they had used it as the basis for the Wing Commander movie, the end result would have been 10 times better than what we actually got. In fact, I think this would have made a better movie than it did a novel, as the plot more or less requires you to switch your brain off for the duration. Don’t let me put you off too much though. It was never boring and looking at the reviews on Amazon it seems that most people enjoyed it more than I did.