Playing X-Wing has been on the backburner for the last week as Summer hit the UK for what seems like the first time in a couple of years. I did forgo the decent weather on a couple of evenings to finish it off though. 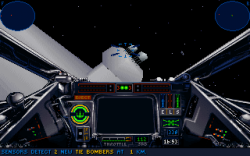 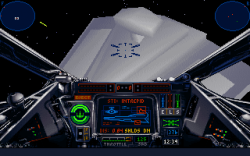 The remainder of tour #2 dealt with protecting ships carrying the data on the Death Star interspersed with some memorable missions to take out another Star Destroyer. These involve attacking its various escorts in some build up missions followed by a direct assault where I have to destroy its shield generator towers on the top of the bridge as shown in before and after shots above. 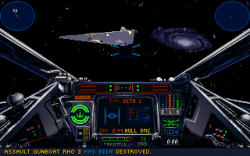 Destroying these towers is simpler than it sounds. I make a beeline straight for them and shoot out both at short-range with torpedoes. I then have to survive long enough for groups of Y-Wings to inflict enough damage which is where the real challenge lies as this must take about another 15 minutes. It goes down with a satisfying explosion in the end. 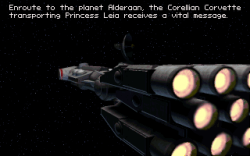 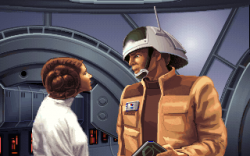 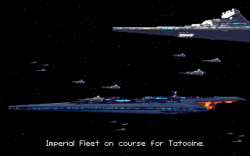 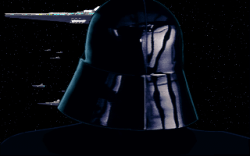 It’s back to the protection missions after this with the end of tour cut scene popping up a mission early as Princess Leia safely delivers the plans. I was starting to lose interest a little when the missions in the middle of this second tour got a little shaky but it picked up in the last third again. 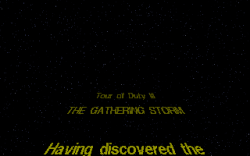 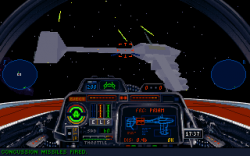 The final tour is never going to suffer from any lack of momentum as it deals with the rebel search for the Death Star. The missions are gradually getting bolder with bigger more complex operations such as capturing an entire frigate.

The first cutscene of the tour recreates some famous parts of the movie where the Death Star is test fired, complete with hand painted Peter Cushing and a guy ducking out of the way of the firing beam. 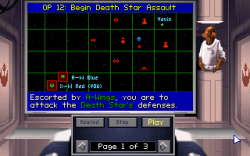 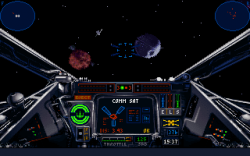 As this final campaign progresses I find that I’m starting to die a whole lot less whether that’s because the missions stop getting harder or me getting better. There is certainly a sense that everything has already been thrown at me by this point in the game. The 3 varieties of TIE are relatively straightforward at this point since they only require a handful of hits and combat with the gunboats has also lost its novelty. I could have sworn I got to fight TIE advanced fighters in this last tour but there is no sign of them by the time we track down the Death Star and it makes its first appearance as a bitmap in space.

This is a strange mission where I have to destroy a comm-sat orchestrating the defences but nothing else. It may not be the right way to play it but I just make dashes for it alternated with flying round in circles avoiding missiles. Once I’m close enough for a missile lock I quickly fire off a shot not waiting for full lock and it’s mission complete without ever firing my lasers. 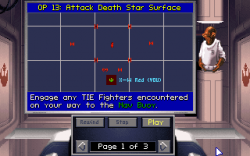 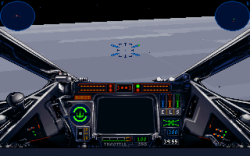 What I’ve really been wanting to get to are the missions on the death star surface which complete the game. For the first of these I have to destroy four hangar points “disguised” as ordinary cargo containers as well as taking out all turbolaser towers within 2km of a nav buoy. First impressions of the death star surface are that it’s a mass of featureless grey… 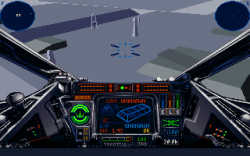 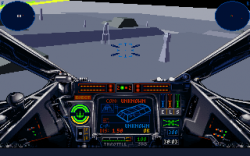 … but I’m glad to say that there are a lot more features when I fly lower down with trenches along the surface, laser towers and other features. Everything stuck on the surface can be blown up as well and this does still look fairly decent for a game of this age. I just about remember getting this far on my 386 only to find that these missions were all but impossible as they ground to a halt. Thankfully that isn’t a problem these days and it’s just as fluid as the rest of the game. 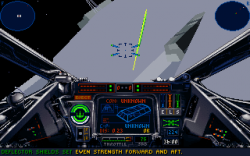 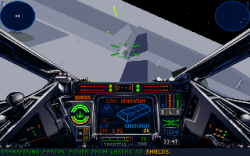 The four hanger ports will continuously launch fighters until I destroy them so first priority is to deal with these. They are placed in trenches so for the most part I can’t just torpedo them at distance and have to fly to each in turn although there are two in each trench 6km apart so they can be taken out in pairs if I line up my ship with the trench first.

After ignoring them at first, I found myself getting swamped by TIE’s by the time I destroyed the 3rd hangar so I thinned out their numbers destroyed the last and then could have some piece to move onto the turbolasers. This is simply a case of targeting the nav buoy and flying within 2km of it shooting anything tower shaped. The towers do shoot back but they don’t do nearly enough damage for this to be a challenge and I got through this mission on my second attempt. 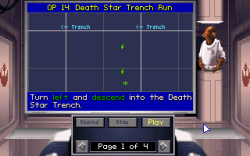 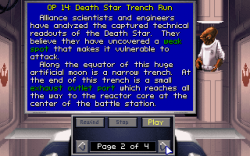 At long last I reach the anticipated trench run. This plays out just like the film where I have to dive into the trench, my R2 will somehow manage to double my ship speed, then I have to fly down it and land a torpedo into the vent. 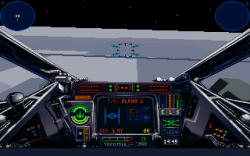 I start out a good distance from the trench with 3 TIE’s to deal with. I also spot some TIE advanced fighters while I’m out here but I was nearly at the trench at this point so I kept going. I presume these were there as a little bonus + a sign of what was to come in the first expansion pack. 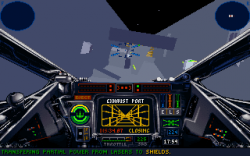 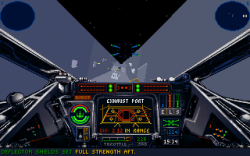 The trench is littered with laser shooting targets and varieties of beams which need to be avoided. This is where the time on the maze at the start of the game comes into its own as this is much the same skillset needed here. I remember finding this hugely difficult in the past and ultimately resorting to a curious strategy of diving in and out of the trench from what I recall. Coming over the top would reduce my speed but did mean I wasn’t in danger of flying into beams all the time.

Probably thanks to the extra horsepower I’ve got available to run this now the mission turns out to be a cakewalk and I’ve soon got the vent in sight. Any temptation to slow to a halt has to be resisted due to the huge number of lasers surrounding it which would no doubt shred my shields if I hung around. I keep it traditional instead impacting the surface with my first torpedo shot but hitting with the second one at closer range.

With the universe saved for now I’m awarded another medal and it’s back to the concourse for another tour. That completes the original game though and it’s where I’m going to stop. From what I recall of the two mission packs Defender of the Empire was brutally difficult and fully introduced the TIE advanced to mix things up a little. B-Wing added a whole new ship to fly but most of the campaign was spent escorting tug pilots ferrying the things around before they made their way into service. They were both worthy additions but I’ve blogged enough on a game that shouldn’t strictly be on an Origin Systems site in the first place.

The two main reasons I wanted to play this again were to see if it lived up to my memories and also see how it stacked up when compared to Wing Commander. I’d have to say that it’s arguably not quite as good I remembered with a lack of variety in opposition. It also wasn’t anything like as difficult with the tactics needed for each mission being readily apparent most of the time. Basically if you are protecting a ship (and you usually are), take out the bombers, shuttles and transports in preference to everything else. Also, if any particular ship/squadron stands out as being unusual make a beeline for it as you can guarantee that is the one targeting whatever it is you are protecting. If it had been as difficult as I recalled then I probably wouldn’t have made it to the end of course as this is a game that required a serious investment of time. Successful missions take long enough without having too many replays.

Despite a slight lack of variety in enemies, the mission design made up for it and X-Wing is still extremely good fun to play without a doubt. There are precious few modern equivalents to compare this to but I was far more engaged with it than Strike Suit Zero for instance. It’s stood the test of time exceptionally well but it would benefit from being in higher definition. I’m usually a traditionalist but as such I would recommend the remake for that reason even without the original music.

As for a comparison with Wing Commander I just don’t see them as being all that similar. X-Wing clearly has its roots in traditional flight sims whereas I would see Wing Commander being a product of arcade shooters. It’s a little like comparing Ridge Racer to Grand Prix Legends (if admittedly much less extreme). As such people are bound to have preferences for one or the other but the vitriol this debate seemed to spark for Wing Commander in much of the UK press in the 90’s was ludicrous and it looks a whole lot like fanboyism. Speaking for myself, I would still side with X-Wing in the gameplay department although I could imagine that the slow pace would infuriate some gamers.

Where Wing Commander really has X-Wing beaten is the presentation and story. It’s curious that the Star Wars game is the less cinematic but even Wing Commander 1 puts it to shame. The X-Wing series at it’s best could never be as involving for me as playing Wing Commander 4.

Ultimately picking a winner between these two is pointless so I’m not going to when I could be playing one of them instead. I’m now an owner of the impressively oversized PS1 dual joystick controller so if this thing actually works the intention is to get back to WC4 next.