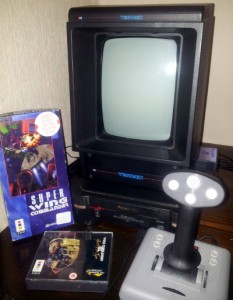 My “new” joystick for the 3DO arrived a couple of days back completing my 3DO setup (with Vectrex accessory) and I’m fresh from trying it out on the only 2 3DO games that matter, Super Wing Commander and Wing Commander 3. It has to be said that I’ve only played the one mission on SWC and fooled around in the simulator a little on WC3 so this is only my initial thoughts.

A few words on the hardware first. It’s a fully analog stick based on a PC version of the same joystick that had been around for some years as I recall. The first PC joystick I ever bought was it’s smaller non-pro brother which only had the 2 fire buttons and no 4-way hat switch. This 3DO version also has four buttons on the base.

It uses a 2 drum system to allow the stick to move on the x and y-axis and while it’s comfortable enough to use, I can’t say that I’m exactly unaware of the independent nature of these drums and it’s easier to move along one axis than two. Moving across the center position, the stick almost clicks into place and it’s far from smooth as a result. The stick also has a rectangular field of movement rather than circular which is a little odd when you get to a corner. I’ve got a similar vintage Thrustmaster joystick I use with my DOS PC which is in another league to this one in terms of feel, at least for combat flight sims like this.

Having said all that it’s still quite a nice stick for the time and the build quality must be great because it still tracks perfectly despite being 15 years old. I had some doubts about buying one of these second-hand but I needn’t have worried.

Onto the games, starting with Super Wing Commander. This boasts support for extended joysticks on the cover and while it doesn’t always work smoothly with the flightstick, it’s a giant improvement. There are some quirks such as moving around the ship between missions requires use of the POV hat rather than the stick. Steering around in flight thankfully works using the stick as you would expect.

Using the original 3DO controller it was possible to apply a slow or fast modifier to steering with the d-pad by holding down the right buttons. Using the flightstick, the game does this for me depending on how much I move the stick, but ultimately I can still only turn at 3 speeds. This isn’t perfect but it’s a whole lot better than the alternative.

Button combinations, as ever with these console ports, take a little getting used to but they work ok with the main commands like missiles and afterburners being in easy reach. The buttons are less to hand than on the original 3DO controller making some combinations tricky. Trying to afterburn and fire a missile at the same time requires either two thumbs or a very strange grip on the joystick. The buttons at the right side of the stick aren’t exactly in easy reach for a right-handed player either when they are needed.

WC3 offers better support with much smoother steering and slightly improved use made of the extra buttons. It’s still not quite what I would expect with the view hat not used for changing view, but I suppose there are more useful things that can be done with it when you have this few buttons to work with. Neither game makes use of the throttle wheel which is a big disappointment.

These sticks aren’t exactly common but won’t break the bank when you do find one. The flightstick pro might not be the best joystick I’ve ever used but despite the shortcomings it’s the only way I’d want to play either of these games on the 3DO.