Real life has been getting in the way of me posting anything on here for a while but I’ve made the time for a brief return. I’ve recently bought myself a CH flightstick for my 3DO, which means I’ll finally be able to play Wing Commander 3 3DO and give Super Wing Commander another go with the right controller. Both of those will have to wait but it appeared to be the occasion to parade this particular item which is a set of negatives dated 11/12/94 for a full page Wing Commander 3 3DO advert:- 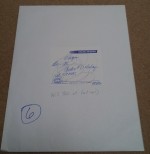 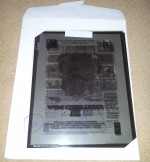 The sticker on the front proclaims these to be “bad seps!!!” but I wasn’t going to let it put me off having a go at combining them into one image. They are a little too large for my scanner but the relevant part in the middle of each negative just about fit. 10 minutes of photoshopping later I produced this:- 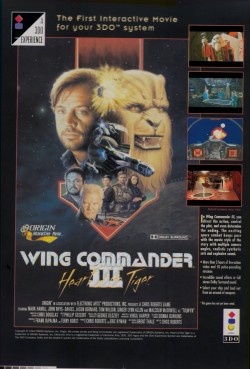 It turned out that the fault on the seps is not exactly significant but still very apparent. I’d have been more concerned about the claim of being the first 3DO interactive movie which is highly dubious given that this didn’t come out until 1995 and the 3DO had already seen games like Mad Dog McCree and Hell – A Cyberpunk Thriller (not to mention the infamous Plumbers Don’t Wear Ties).