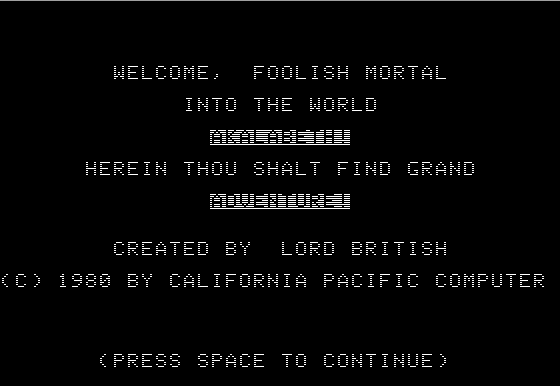 Akalabeth was originally self published in tiny numbers by Richard Garriott in 1979 before being snapped up by California Pacific and sold on a large scale. It saw several versions with different cover art and manuals over the space of 2 or 3 years before California Pacific went out of business leaving Richard Garriott looking for another publisher for Ultima 2. The full story is well known, so I won’t repeat it all again but you can find it in the Official Book Of Ultima or 95% of the interviews Richard Garriott has given over the last 30 years.

In terms of getting hold of an original copy of any version, it’s relatively uncommon and still in high demand making it by far the most expensive game I’ve ever bought. At least 30,000 copies were sold though so there are probably several thousand of them still around. Disk images are of course available in the Asimov Apple II archives for those who can live without the real thing. Until now I’ve only ever played the MS-DOS remake included with the Ultima Collection but if I’m going to pay hundreds for a game I reckon I ought to at least play it. 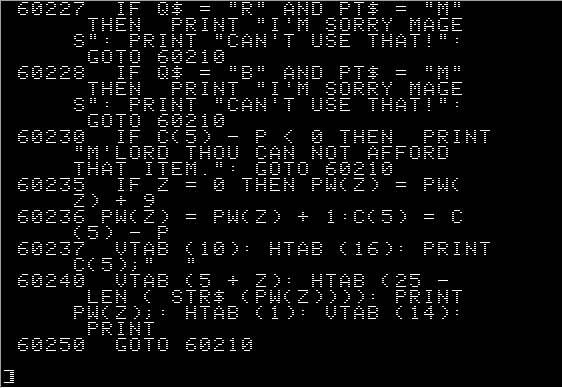 Before I actually get to the game, something that may be of interest is that with software written in BASIC on old home computers, you can usually break out of the program while it is loading and list the code. Akalabeth was entirely written in BASIC so if you fancy poking around in the code written by a youthful Lord British all those years back, press CTRL-C while the game is loading and then type catalog to view all the files on the disk. From here type load filename and then list to view the contents of any the files. This trick also works with Ultima 1, although you can’t quite see the entire source code as a few small portions were written in assembly. 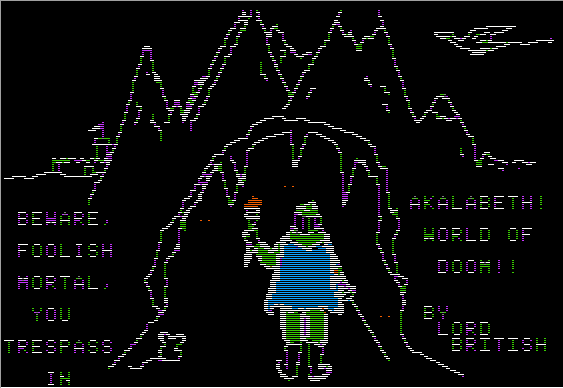 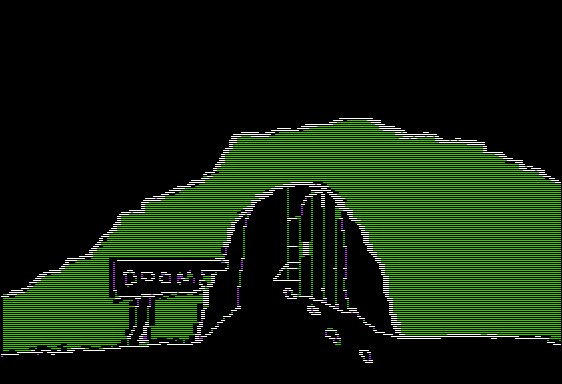 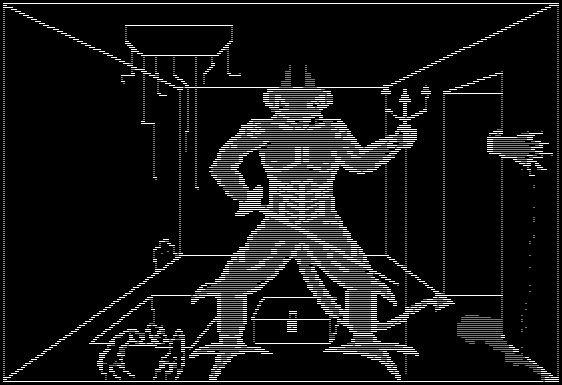 I was expecting not to see any real differences to the PC remake in all honesty, but perhaps the biggest difference is evident right from the start in that the game has a 3 screen introduction. This isn’t all that spectacular but it is definitely better than nothing which is what we got in the Ultima Collection version.

Character creation is exactly the same. There is a patience sapping option to continue rerolling stats but it’s not worth spending too long on this on the whole. There is a choice to play as a wizard or a fighter. I’d strongly recommend the wizard as ladder up spells come in extremely handy but it wouldn’t be too hard to win as the fighter either. 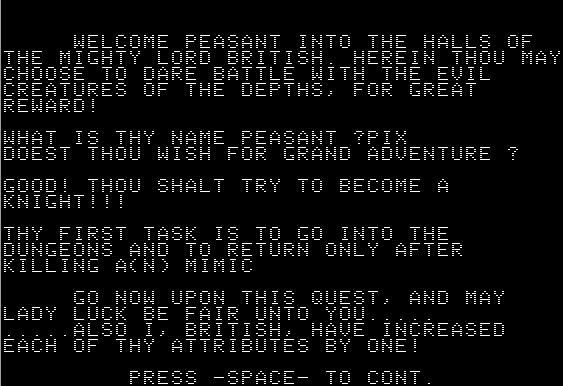 The early aim of the game is to explore an overland map and find Lord British’s castle to  receive a quest. The one time I went to a dungeon first to build up some stats, the game restarted as soon as I tried to accept this quest. This game is not without bugs like this although this was easily the most severe I encountered. The overland map looks much the same as the remake and you move around in a 3×3 grid of line drawn tiles. This map was exactly the same in each game I started so it appears that only the dungeons are random in this version. 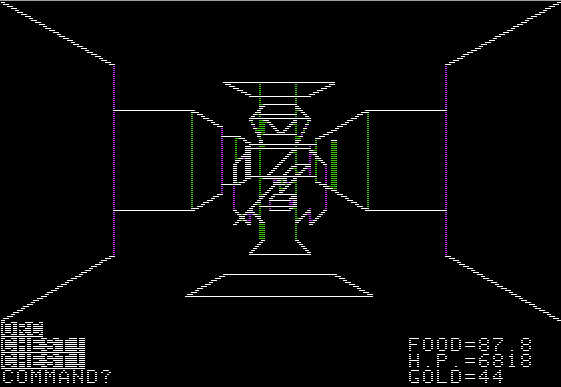 The dungeon quests all involve killing progressively tougher monsters. On the whole these tend to be found at lower levels of the dungeon each time but this wasn’t always the case. The key to beating the game is the use of magic amulets to cast the ???Bad spell. This either turns you into a toad or a lizard man dividing or multiplying your stats depending on which. At first this may seem entirely random, but I discovered that the game actually used the same sequence on each level of the dungeon. Exiting that level and returning reset the sequence, so it’s a simple case of finding a level where the lizardman spell is cast first, then exit come back and repeat until you have godly stats.

In a similar manner chests reappear each time you enter a level, so you can max out gold just by finding a chest near a ladder and grabbing it over and over. After a little of this my character was comfortably well off and mostly invulnerable with the exception of Gremlins which are a serious pain stealing half my food with each hit. The strange food mechanics from Ultima 1 apply here where your food goes down with every step and if you reach 0 you die instantly. Thankfully my beefed up wizard could kill pretty much anything in one swing of an axe at this point so Gremlins were not too much of an issue provided I spotted them quickly. Judicious use of save states certainly helped but the game is easily completable without.

The dungeons play much the same as the remake. The main difference was that monsters often retreat when you have damaged them a bit, then come back and attack again later, although it’s not too advanced as they only ever retreat in a straight line backwards. I also noticed that I didn’t tend to get beset by monsters quite as quickly so I don’t think they have any pathfinding skills beyond the direct route. 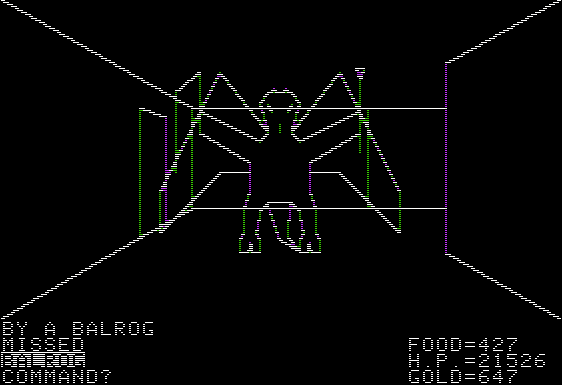 After completing 4 or 5 quests, I get my final mission to take out a Balrog. My tactic is to save my amulets on the way down using ladders, traps and trap doors to get down levels as quick as possible, carry out a hit and run on the Balrog then cast ladder ups all the way back to the top. On my return to LB, I’m rewarded with Knighthood and a phone number to ring, which I’m sorry to say is 29 years out of date. 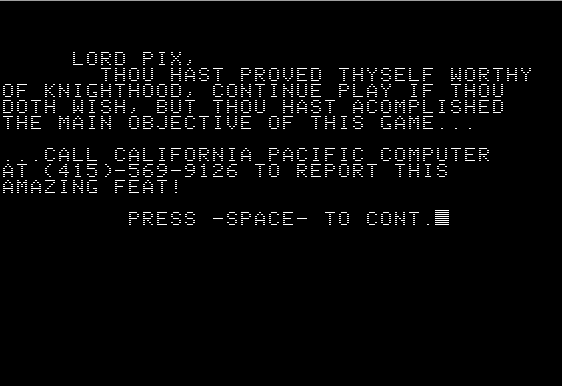 It’s hard to be objective going back and playing a game this old, especially on hardware that I didn’t own at the time. One of the things that will strike anyone playing this is how slow the drawing algorithm is, giving away the fact that it was written in BASIC. We all had a lot more patience back in 1980 and I was happily playing games that took 10 minutes to load off a cassette well over half a decade after this came out. Even so, this really is slow by any standards and you can see it draw each block of the maze after every single move, even if nothing changes such as when in combat. If I couldn’t put the emulator up to maximum speed, playing this would have been painful.

Ignoring the speed, it’s not an especially well designed game relying mainly on a simple exploit with the talismans and spotting the games lack of randomness to progress. It was quite complex for the time with its RPG style stats and different player types but there is no significant way to develop your character after the start of the game. LB advances your stats by 1 after each quest but I can’t imagine this making any significant difference. With the additional of levelling up stats through combat, this could have been a full fledged RPG but Ultima’s avoided what would become traditional levelling systems for years.

This was still a great effort for a game that was after all never intended for public sale but Ultima was a big step forward and a far more rounded game, at least the Ultima that I’m familiar with. I’ve never actually played the Apple II original however which is what I’ll be looking at next.