Ultima was first published in 1981 by California Pacific. It was written almost entirely in BASIC with a few assembly routines used to draw the screen. The original release never made it to the PC and the version included in the Ultima collection is a 1986 remake. The original release only had ziplock packaging like Akalabeth and didn’t include the maps and coins or any other extras that would become a staple for the later games.

In the past I’ve played the PC remake a few times + the C64 version more recently on my Pandora. The C64 version was basically identical to the PC with nothing to choose between them. I’d never played the Apple II original though, despite being all for playing the first release of a game in most cases and it’s about time I did. 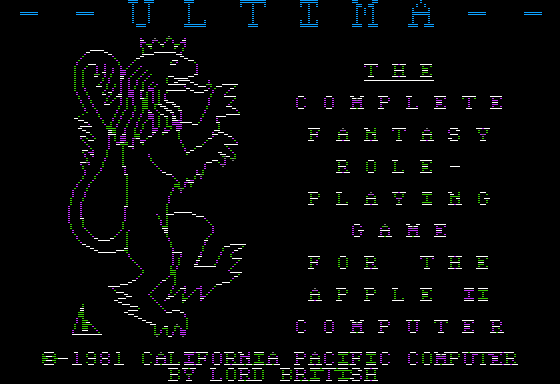 The introduction sequence of the remake is gone and there is just a single screen, making it less impressive than Akalabeth if anything but it’s not a huge loss. 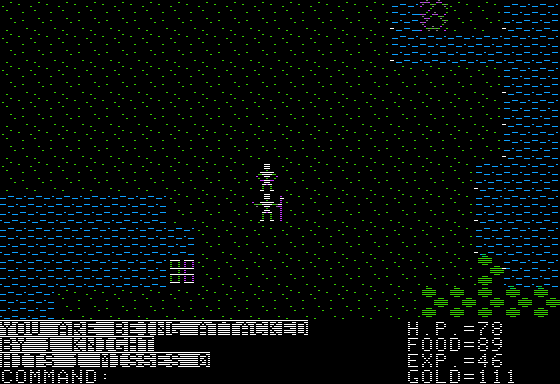 After going through the character creation, I’m surprised at just how familiar the game looks. I was expecting something a lot more primitive somehow, but the major difference to the remake is the lack of animation which isn’t all that noticeable. The other obvious change is the speed of the game. It really isn’t quick and unlike Akalabeth, it passes a turn if I don’t move for too long meaning I can’t just stick the emulator on maximum speed. I settle for upping it to about 3x normal which is very playable although still not what you would call sprightly.

I quickly stumble into my first combat. I don’t get to see the creatures approaching in this version and they just spring out of nowhere directly in front of me when I’m moving around. Combat isn’t directional either and I just have to press A to attack and it figures out if I’m in range or not. The other difference is that I’m attacked by bands of creatures (represented by the one sprite) which I have to kill one by one. Each kill gives me gold and experience, meaning that you can actually level up quite quickly in the outer world in this game but it is a lot more dangerous until you get yourself equipped to deal with it. 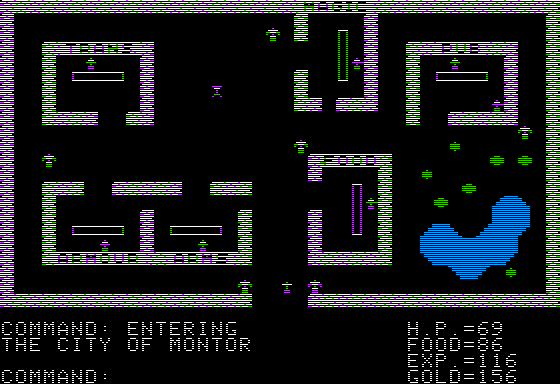 I head for the nearest town to stock up on much needed provisions. Everything here is very familiar, and will become more so as every town in the game looks exactly the same. At this stage I can only buy basic equipment, and should probably have tried stealing (which allegedly can get you the stuff they aren’t selling yet) but it didn’t occur to me until now, so I started out the game the hard way. 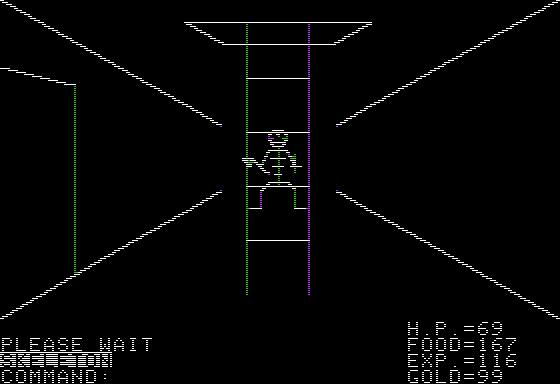 The dungeons are straight out of Akalabeth but there are plenty of additions with new monsters, coffins to open, force fields + the option to search each location to reveal traps and doors. There is nothing in the remake that isn’t here as well with the only change being the same agonizingly slow redraw rate seen in Akalabeth. I did notice a proliferation of traps in this version but you can avoid these retrospectively when using an emulator by searching the area after a quick restore from a savestate. 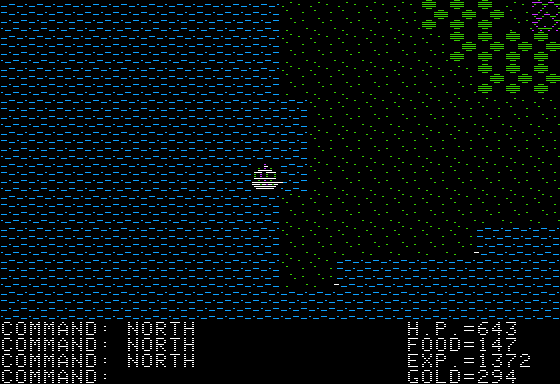 The start of the game is really quite testing in Ultima but once you get through it the game gets a lot easier. After several dungeon raids, I stack up enough gold to buy a frigate and take to the seas at which point I can start to build my character up. 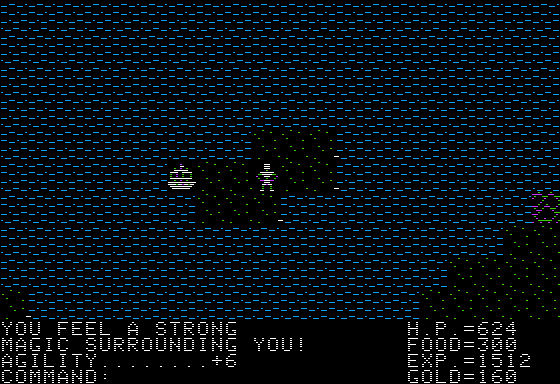 The familiar Ultima 1 levelling system of trailing between various signs to raise stats is present here and the maps look to be about the same as I’m used to in the remake. I’m soon going backwards and forwards between convenient pairs of signs upping my stats and grabbing weapons. The frigate appears to make me nearly invulnerable and it’s cannons quickly take care of any monsters. The cannons even appear to find monsters I haven’t actually seen yet and since I don’t have to aim in the combat in this game (except in towns and castles), I gather a lot of gold and experience while I’m travelling around. This grinding is the main part of the game and I must have done going on an hour of it before I felt well equipped enough to start trying to complete the dungeon quests. 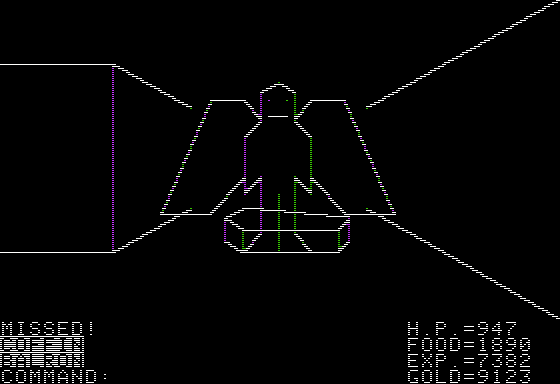 These quests are straight out of Akalabeth and involve killing particular monsters for 4 different Kings/Lords. There appear to be a few bugs in the game regarding remembering which quests you have and haven’t done. I stacked all four quests up to do them in one trip and this worked OK for 3 of the them but I ended up having to do the most difficult quest to kill the Balron twice. 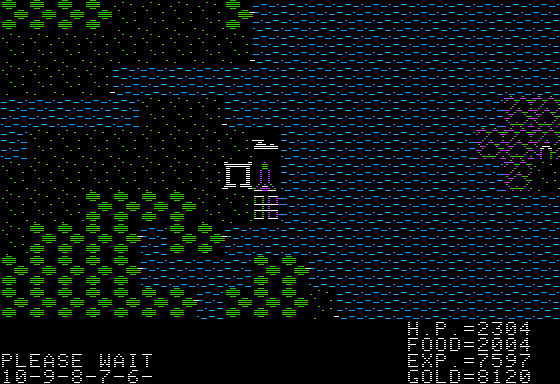 Once these were out of the way it was time to buy a space shuttle and take to the skies. 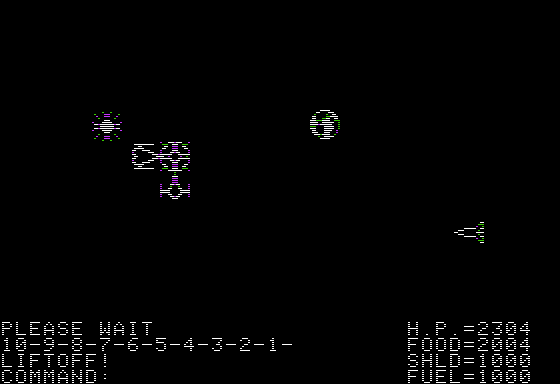 Given the speed of the rest of the game, I was expecting the space section to be fairly awful but it actually runs well. The star field looks pretty decent and smoothly speeds up and slows down when entering hyperspace, although we don’t get the stars stretching out effect at the end. 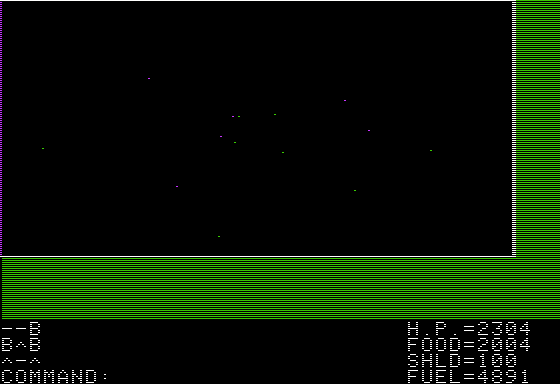 The map of space is a little more basic than the remake though  and all you get is a 3×3 text square of your immediate surroundings. This means that you can potentially get lost so it’s a good idea to keep track of where Earth is. On the plus side, I didn’t appear to have to pay docking fees so you can swap ships as much as you like, making the whole section quite easy. 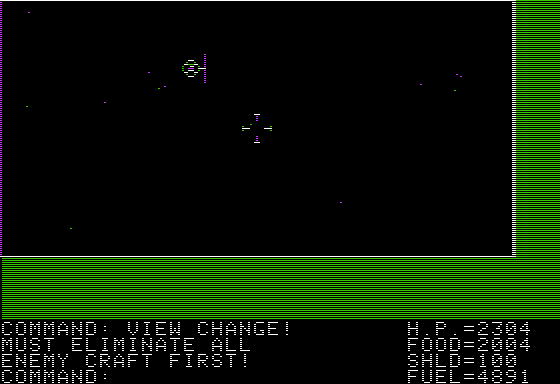 The space combat has the familiar tie fighters and they look better in this than the remake if anything. It appears to have lost a wing in my one and only screenshot but they were both there in the game. The combat involves steering the fighters to the center of the screen and firing. It’s not exactly taxing but it’s a fun diversion in the middle of the game. I couldn’t find any real skill to this and whether you have enough time to shoot any given ship before it fires at you appeared to be random.

The fighters always came in groups of 3, rather than 1-3 as in the remake. Although I couldn’t go into the overhead view to change direction, it was possible to hyperspace out again before killing all 3 which is just as well as I started out in a ship which I discovered couldn’t survive a single hit. 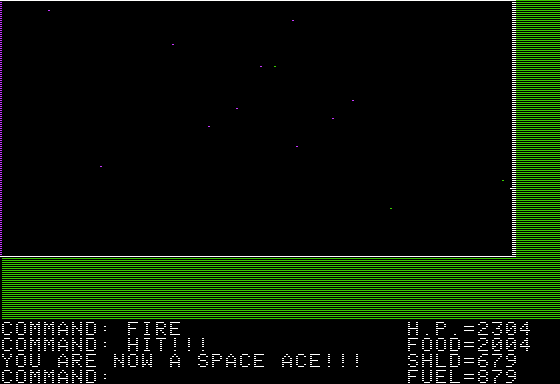 I soon reach the rank of Space Ace, although again the game forgets this and I have to go back and do it again after rescuing a load of princesses fails to net me a time machine. 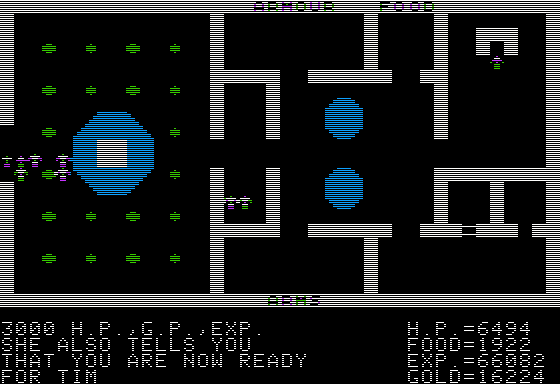 Rescuing Princesses turns out to be a great way to gain gold and experience and by the time I’ve gone back to regain my Space Ace’ness, I have a serious amount of gold and experience stashed up. The guards are tougher than ever and the best approach is to run them around Benny Hill style rather than trying to kill them off. 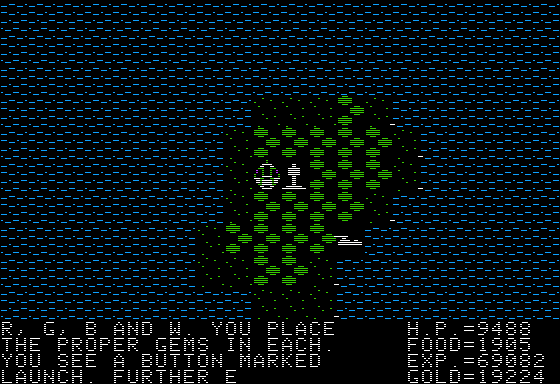 I should really have spent the gold first to get my HP up, but 9000 HP was always enough in the original and I’m keen to push on. I quickly find the time machine and jump in…. 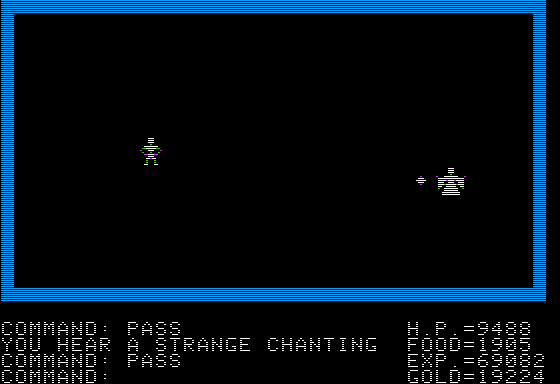 I don’t remember Mondain’s lair being quite this plain, but I head straight for his gem, grab it and start blasting away. 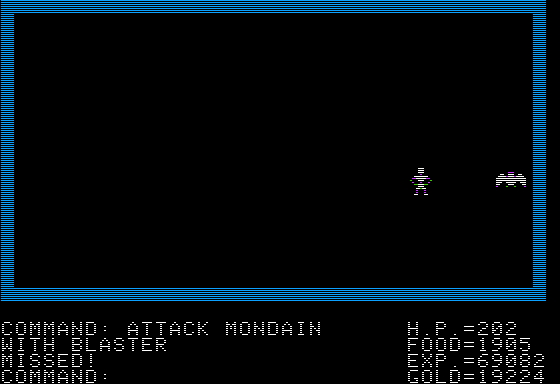 Modain transforms in a bat after a punishing skirmish but then just sits still so I can fire at him with impunity, which is just as well as I’m all but out of hit points by now. 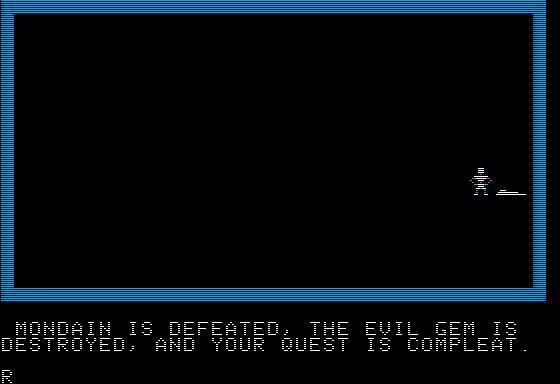 I kill him a few times but he always comes back to life, so I try closing to point blank range and ‘Getting’ the corpse which apparently does the trick. There is no end cutscene, just a final message (and yes that is a strange way to spell complete). 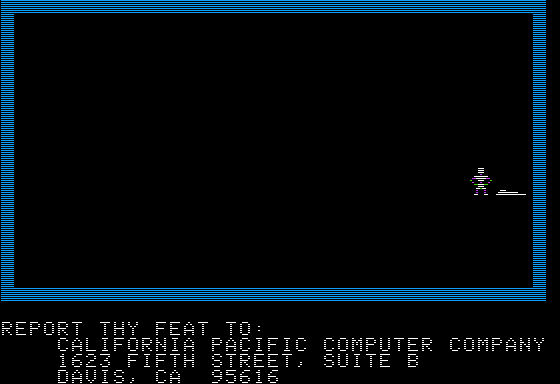 There is an address instead of a phone number this time to contact California Pacific. It’s interesting that both this and Akalabeth asked people to report to them if they finished the game. I can’t help but wonder what you got for this and if there were completion certificates for these original games. If there were, I’ve never seen them mentioned anywhere.

Playing these games back to back for the first time since I started this blog, Ultima 1 feels like the game Akalabeth should have been. It’s adds a story (of sorts), some new quests, grindable stats, a fun little space shooter and an endgame. The space section is out of place but it makes the whole thing that little bit more epic. For it’s age, it is still quite a fun and varied game to play and were it not for the slow movement, there wouldn’t be much to choose between this and the remake. If I’d been a little older and rich enough to own what was a ridiculously expensive computer over here at the time, I’d have loved this game back in ’81. It desperately needed to be done in assembly though and the move to that for Ultima 2 had to be the way to go. Anyone who thinks Ultima 2 wasn’t an improvement should try playing both games at their original speeds.

I’ll be having a look at the VIC-20 version of Escape from Mt Drash next.