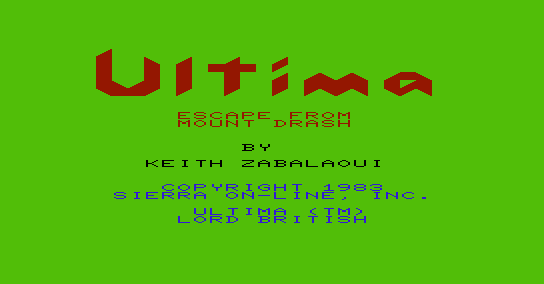 Escape from Mt Drash was published in 1983 by Sierra, apparently without the knowledge of Richard Garriott, despite being badged with the Ultima name as a cheap attempt to get sales. It clearly didn’t work as it’s one of the holy grails for Ultima collectors and was rumored to not even exist back when I buying most of the Ultima games. There are a handful of copies known about now but it is without doubt one of the rarest games going. Suffice to say I don’t actually own this one myself, and probably never will. I wouldn’t exactly turn it down if I got the chance to get it for a half decent price, but let’s face it this isn’t a real Ultima game in any sense of the word and there is no way it is worth the $1000’s it would no doubt go for on Ebay.

The game was only ever released on the Commodore VIC-20 and required the 8K memory expansion to run. It was written in BASIC, which presumably made it relatively easy to port to the PC and it was this port that I played back in the early days on this blog. I found a ROM of the original game recently though which is what I’m playing here. I’ll keep this fairly short since the game ended up being nearly the same as the port. 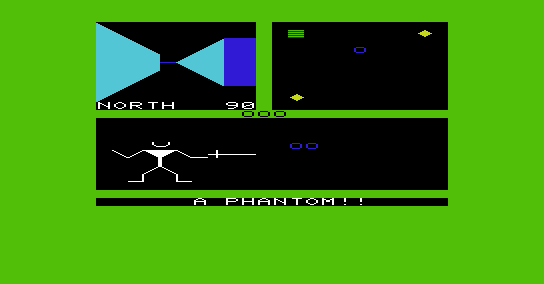 The plot is that you have been imprisoned in Mt. Drash by the evil Garrintrots. The mountain is full of old mine tunnels which they have converted into tests designed as their entertainment and you have to make it to the top level. It’s basically a simple 15 level maze crawl with a few monsters and spells thrown in.

First impressions on starting this up were actually favourable. It certainly moves nice and quickly compared to the dungeons of Ultima 1, and this original version includes background music. I suppose that makes this the first Ultima game to include music and initially it doesn’t sound too bad all things considered. It includes a rendition of Camille Saint-Saëns’ Danse Macabre which I’ve always liked since it was included in a sequence in Alone In The Dark. 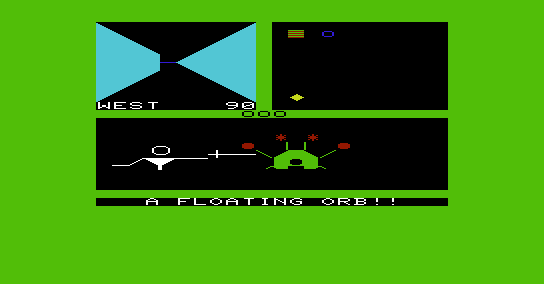 The gameplay in the PC port was extremely faithful, and the only real difference here is in combat. The combat in this game is odd to say the least. You and the monster are represented at the bottom of the screen and as far as I can tell the fighting involves timing your sword thrust to jab the monster just as it approaches you. If you are too late, the monster keeps coming and you lose a life, too early on the other hand and it bounces back off the sword point before bouncing back off the rear wall and making another attack. While it’s bouncing around I can swap back to a neutral stance and then get ready to thrust again. The bottom line of all this is that if you press the c key when the combat first starts, all you have to do to win every fight is quickly alternate back to parry then thrust by pressing x once, then hammering the c key. This method got me through every fight unscathed.

As you progress the levels get marginally more difficult. The number of monsters increases first, then you have to pick up gems before the level exit opens up. Finally the overhead map stops working and you have to figure everything out for yourself. Suffice to say, none of these make the game difficult and each of the levels takes no more than a minute or two to complete. 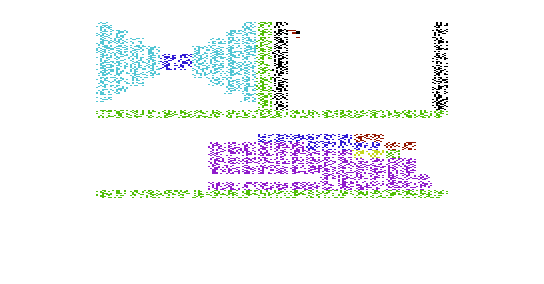 At the end of the game the screen starts blinking white…. 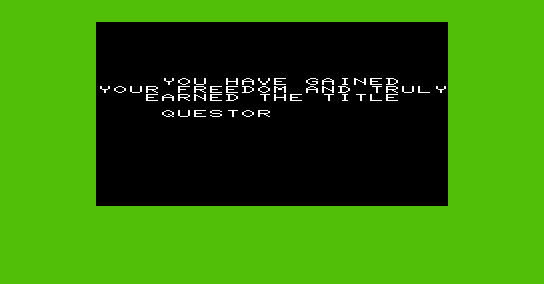 … then there is a quick congratulations with a fanfare and the game restarts.

I wanted to like to this game and I did actually kind of enjoy playing it at first. The music soon started to grate though and I’d had enough by the end of the 15 minutes it took to finish it.  Going by the last price I saw on Ebay I reckon this works out at something like $150 a minute if I’d actually bought this. If you are going to play it, I definitely prefer this original version to the port though.

You have to allow some leeway for games written in BASIC on early home computers and it certainly isn’t the worst game I’ve ever played. That honour goes to Sqij! on the ZX Spectrum, a game so badly programmed that you have to do a memory poke just to get the controls to respond, at which point it really goes downhill. Compared to that Escape From Mt Drash is truly great but it doesn’t exactly come with a seal of recommendation for all that, and you have to be an insatiable Ultima fan to go anywhere near this one.

To change the topic, I was informed about missing pages in some of the pdf’s on here for Wing Commander 1 & 2 Strategy Guide, More Avatar Adventures, Quest For Clues 3 and The Dig. Those are all fixed for anyone who wants to download them again. More of my scans on replacementdocs are being approved and I’ve now started to remove them from the downloads on here. I definitely need to clear some of them off my own webspace. With the amount of bandwidth they have been using up it’s a miracle that my account hasn’t been stopped already.

I’m away most of next week so that’s probably all the updates for a while. I’ll see if I can’t actually get Pilgrim Truth finished while I’m away. I’ve been reading it in tiny chunks over the space of about a month which is no way to read any novel. When I get back I’ll be having a look at one of the console Wing Commander ports next, either the SNES or Mega CD version.