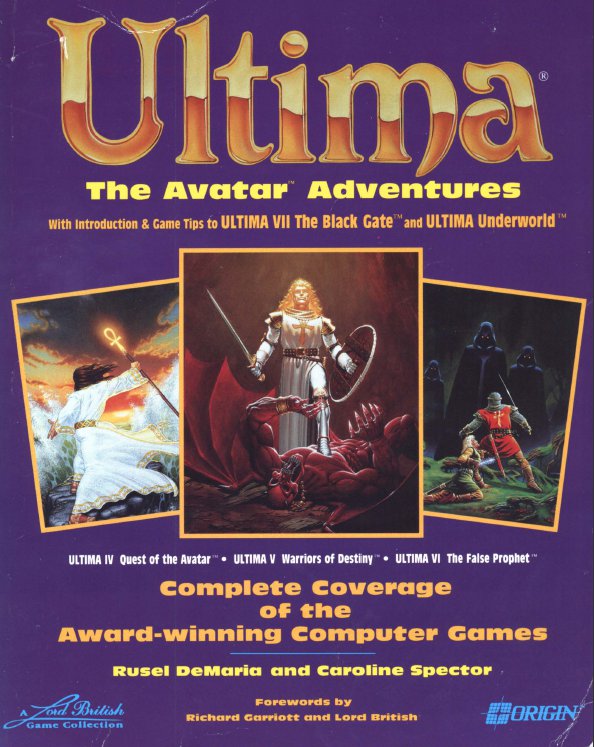 This was published in 1992 by Prima. I’ve had an extremely long standing request to scan this in that must go back several years. It may have taken a while but I got there in the end and it’s now in with all the others.

Avatar Adventures covers Ultima’s 4 through 6 with full solutions for each of them. Origin isn’t exactly short on guides to these games as we’d already seen them in the Quest For Clues books, the Official Guide to Ultima, and the 3 separate cluebooks for each game. What makes this one different are the lengthy novelisations of each of the games.

These are presented as being the Avatar’s journals, with occasional notes by the editors. The narrative is extremely faithful to the games with plenty of the dialog being taken straight from them. Some of this is embellished but the events and places are close enough for the novel to be a walkthrough of sorts. It does skip a few sections to keep things entertaining. For instance, the dungeons in Ultima 4, with the exception of the abyss are missing as those journal entries have supposedly been lost. Some events also occur out-of-order by luckily stumbling across things before being told about them. This saves some of the travelling backwards and forwards that anyone who has played the game will remember.

I’d have been skeptical before reading this for the first time a few years back, that anyone would be able to turn a game like Ultima 4 into a novel with any success whatsoever. The reality is, that it’s actually among the more enjoyable game adaptations that I’ve read. The more abstract and open world of Ultima 4 allowed for enough interpretation to make the adaptation not just feel like a poor alternative to playing the game as so often happens. It has the room to build upon what is already in the game and improve on it.

The other two games had much larger conversations so there is more skipped. Their stories remain just as true to the source though while taking a very optimised route through the game. With the size of Ultima 5, it’s novel is easily the largest of the trilogy and takes some time to read through even if this is the shortest route. There is far less skipped than I would have expected in anything that remained entertaining to read in its own right.

Obviously there are limitations with being so faithful and reading this might not be as much fun for anyone who hasn’t played the games. This isn’t especially relevant since that isn’t the target audience and as an Ultima veteran, this was a great way to relive some of my favourite games without spending anywhere near as long as replaying them would have taken. The embellishments such as having Jaana as a half-hearted romantic interest never struck me as out of place and are the sort of thing that might have been in the game had their been more interaction with party members.

The text is interspersed with some nicely done black and white drawings to illustrate them which are, as far as I know, unique to this book. There are also the early stages of Ultima 7 and Underworld in the appendices. These were covered in full in More Avatar Adventures which I’ll get onto at a later date.

The novels justify the price of the book on their own but a bonus at the end is a long interview with Richard Garriott. This treads very familiar ground for anyone who has read some of RG’s other interviews and is almost a condensed version of the official book of Ultima. The later stages are more interesting when he moves onto Ultima 7 and where he saw the series heading afterwards.

This was one of the most enjoyable of the books that I’ve read for the blog. I’m certain that a large portion of this was nostalgia for the games, but its authors did a great job adapting all these games into a workable story. I’m looking forward to More Avatar Adventures now but I’ll probably save it until I’ve read a few of the others that are on the list.