I’ve looked at the early games of several famous Origin employees but have never got around to any of Chuck Bueche (aka Chuckles) early titles of which there are several. Bueche was one of the four co-founders of Origin in 1983 and the only non Garriott in that group. Prior to that he put out several titles on Atari and Apple platforms and I’ll be giving each of them a play over coming weeks.

One of those early games was Brainteaser Boulevard which was published by California Pacific in 1982. I gather that Beuche never saw any money for the game with California Pacific going bust shortly afterwards. I don’t own a copy myself so the pictures below come off a fairly recent Ebay auction where this sealed copy went for the not all that unreasonable sum of $30. 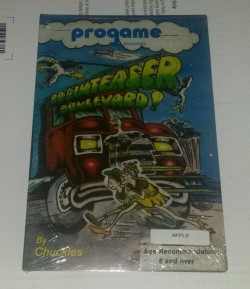 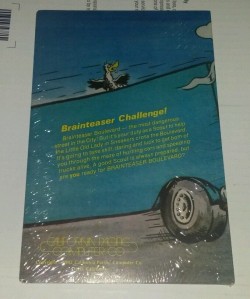 It’s an Apple II game but didn’t want to run on my IIGS so I’ll be resorting to an emulator. The title doesn’t suggest it but Brainteaser Boulevard is a Frogger clone pure and simple. Instead of a frog, the player takes the role of a scout helping old ladies dash across a lethal 4 lane highway. 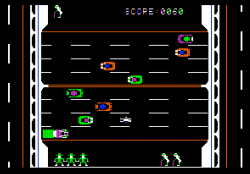 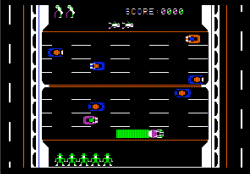 The gameplay is considerably simpler than Frogger since there are no logs to jump onto or lily pads to aim for. It’s merely a case of getting to the top of the screen and returning to the bottom without hitting anything. The trip back is made harder with the old lady walking by your side making the player character twice the size in effect. If just the lady gets hit by a car you can go back and pick up another one without losing a life. If the player gets hit then they’ve both had it. Run out of old ladies one way or another and the next level starts, all exactly the same except the cars move more quickly and you score more per trip.

Brainteaser Boulevard doesn’t play badly but it’s clearly a step down from Frogger. There is little reason for the player ever to move left or right and it gets near impossible quickly no matter how good the player. I had an issue with the keyboard controls where the character stops moving when a key is held down until the character repeat kicks in. This may have been an emulation issue but it certainly didn’t make playing this any easier when my character would take one step into oncoming traffic and then hang around for a second.

Other than that it’s not a badly made game but is just one of many in a sea of uninspiring Frogger clones so I can’t say it’s worth anyone’s time these days.