I’m continuing to play through Chuckles’ early games and next on the list is Creepy Corridors. This was first released in 1982 by Sierra on the Apple II as part of a collection of 4 games called Laf Pak. All of the games were written by Bueche and came on a single disk. I don’t have a copy of this so the photo below is courtesy of vintage-sierra.net. 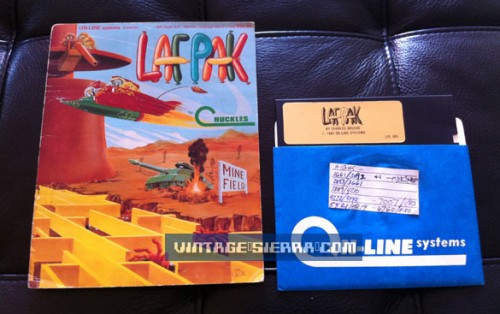 On loading the game, the player got a little menu with some beeping music to select one of the four games. I’ll stick with just Creepy Corridors for this post and look at the other games another time. 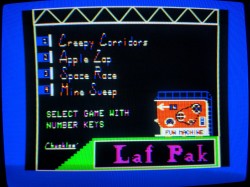 Creepy Corridors is a simple maze crawl where the player has to work their way around the screen collecting diamonds and shooting at monsters. You can only fire one shot at a time so don’t want to miss on a long corridor. The monsters all spawn gradually from the same location. Once all the monsters are dead or all 4 diamonds collected, it’s off to the next level via the door that appears. Collecting all the diamonds gives an extra life. 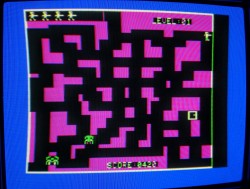 The concept of the game is simple enough, and an obvious Pacman variant, but I found this strangely good fun to play on the Apple II. The levels start out extremely easy and the player can simply find a safe spot to shoot every monster if they wish. Later levels introduce white skulls which are invulnerable and these levels get extremely frantic. The monsters chase the player around the map once they have a line of sight and when one of these has locked onto you they are very difficult to shake.

There are hordes of monsters on later levels and everything (including the player) speeds up on each successive screen. The code handling the speed of the game could have stood some improvement. The speed is all over the place while monsters spawn at the start of a level. Think of the speed of that last space invader when there is just one left and you won’t be far off. Things slow down when there are a few monsters on the screen but it’s lethal at first. I’m surprised just how fast the Apple II can push these sprites around.

The main claim to fame of Creepy Corridors is that it was allegedly the third ever Apple II game to include sampled speech with Chuckles himself providing the dying scream should you blunder into one of the monsters. The rest of the sound is more mundane but functional.

I’ve got a theory that there are only 10 levels in the game but I only managed to get that far once and was far too busy to get a photo or finish the level. Level 10 was extremely open with very little maze allowing access to me for the monsters from all directions. If that is the last level, I’m sure I could beat this game with a little more practice and a lot of luck. It does run so fast at this point, I’d need a stack of lives left to make suicide runs to the diamonds. 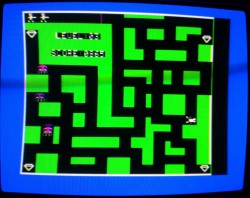 I can’t say that Creepy Corridors is anything particularly special but I still liked it and for one game on a four pack it’s not too bad at all. It grabbed my attention enough to make me have numerous attempts to complete level 10 at any rate. On its own it would have been a definite improvement on Brainteaser Boulevard and this came with 3 other games thrown in.

The story isn’t quite finished there as Creepy Corridors saw a 1983 release on the VIC-20 as an individual game. The port was done by Don McGlauflin and I thought I should give this a quick go. There was a slight hitch in playing it however. NTSC VIC-20 games will run on PAL machines but end up in the top left corner of the screen. Plenty of games allowed the player to simply move the screen to the middle with cursor keys at the main menu but if this option was present here I couldn’t find it so the left edge is slightly clipped. Other than that it all ran fine. 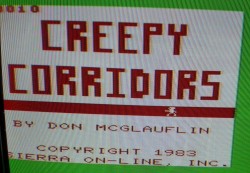 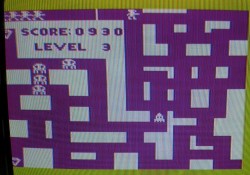 The VIC-20 version is immediately familiar and plays largely identically. There is a title screen this time around but no screaming Chuckles when the player gets caught and the screen is monochrome. What really lets this version down is the horrible collision detection. As I understand it, the VIC-20 can’t do sprites in the conventional sense and instead uses character based graphics where the screen is effectively made up of a load of tiles that are swapped to create the illusion of bitmaps.

This is all well and good and the “sprites” in the game move smoothly meaning you wouldn’t know the difference. The snag here is that the collision detection appears to work purely on the basis of intersecting characters meaning you can be nowhere near and get hit. It absolutely ruins what would have been a decent port when you can get killed by monsters that aren’t even in the same corridor. If you really want to play Creepy Corridors, avoid this version and stick with the original.