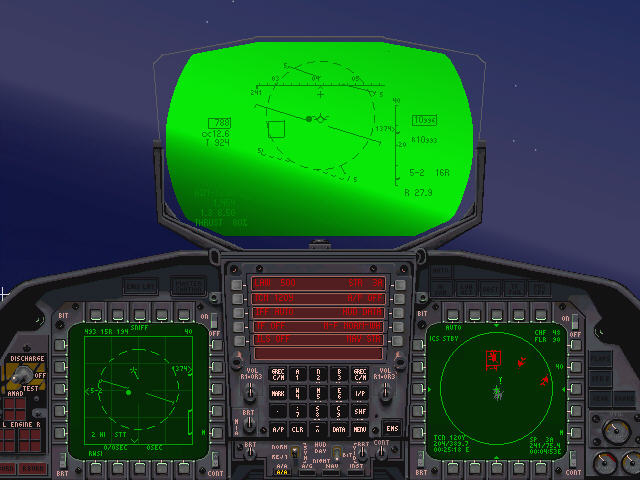 I attempt to restart the F15 campaign where I left off. I soon realise that F-15’s campaign mode doesn’t allow you to go back and retry a mission. If you fail, then you have to live with it and it will change subsequent missions. I don’t realise this until I’ve failed most of the early missions but I press on regardless. 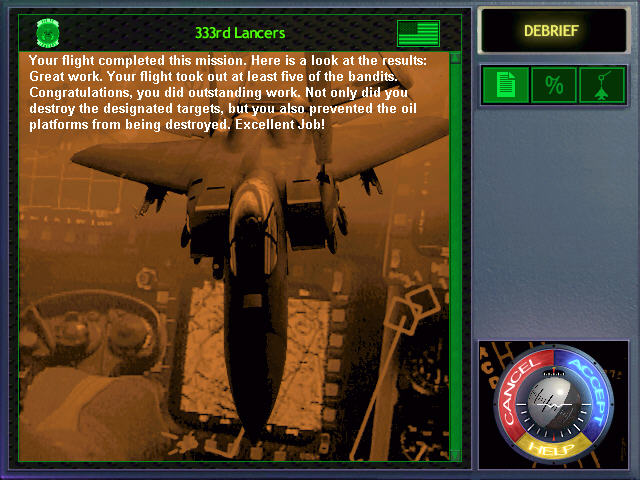 The commands to speed up time and skip to the next action point work reasonably well. The skip to waypoint option is a little strange in that it takes you to predetermined stages in the mission and it’s entirely possible that important things will happen on your way there which you don’t see. I.e. you can emerge in the middle of a load of fighters, or take damage. Alternatively you can still be way off the action. However, I’m never quite sure whether the next point will take me to the target or straight to the end of the mission and this is the reason for failing most of the early missions as I simply autopilot past my objectives. Never try to use this jump feature after the last waypoint by the way, as it hangs the game up permanently as far as I can tell.

Speeding up time allows for 2x, 4x and 8x options. This sounds good but the game keeps automatically lowering this making 8x almost impossible to use. It’s a little irritating but I can still speed things up considerably.

The biggest challenge in F-15 is finding my target as far as I can see. I’m never sure which waypoint to look at and the before mission map doesn’t work too well. In fact scrolling around it is so awkward that I give in on it and just hope that I see my targets at some point in the mission. Once I’ve flown a few and know what to expect this works reasonably. The missions I’ve flown have varied from blowing up attacking planes or helicopters to strikes on airfields or structures. They tend to involve flying in large groups which I lead. For a typical bombing run, I’d have my own wingmen then another pair of fighters with the same load-out. There would also be another 4 escort planes without bombs just there to keep us safe. The F-15 has quite limited ordnance and I’ll have just 2 of each type of air to air missile as a rule with a slightly larger bomb load-out. The gun is extremely limited in ammo also and not something I make much use of. With such restricited firepower, it’s very much a game where you are part of a team and you certainly aren’t crucial to the missions success in the same way as a Wing Commander game. If you can get your wing to the target and order them to attack, then you will usually beat the mission. 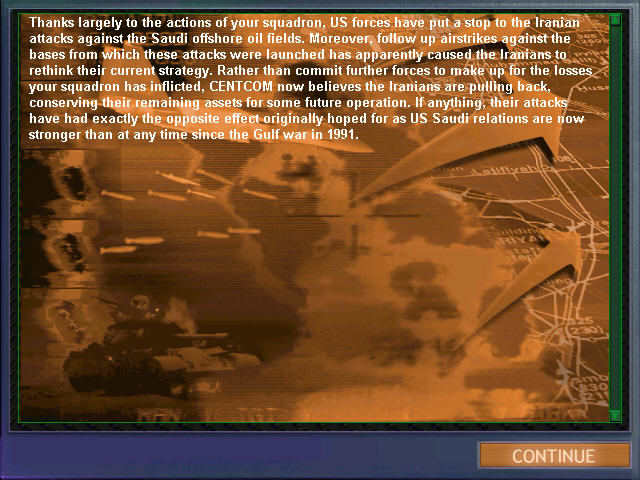 The most significant mission we fly involves striking bunkers containing the Iranian leaders. After this I appear to have to go back and re-fly the same missions that I failed at the start of the game striking airfields. I’m guessing that the mission structure is somewhat interactive here but I don’t know to what extent. Maybe if I hadn’t failed those missions, the campaign would have ended after blowing up the leaders. After 20 missions, the Iranians capitulate and we win the campaign. 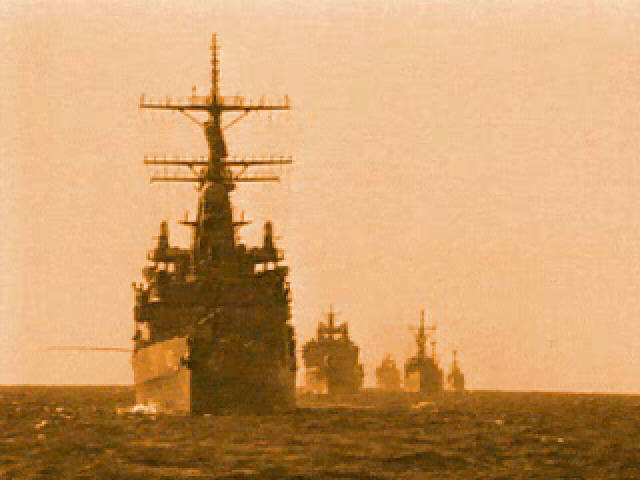 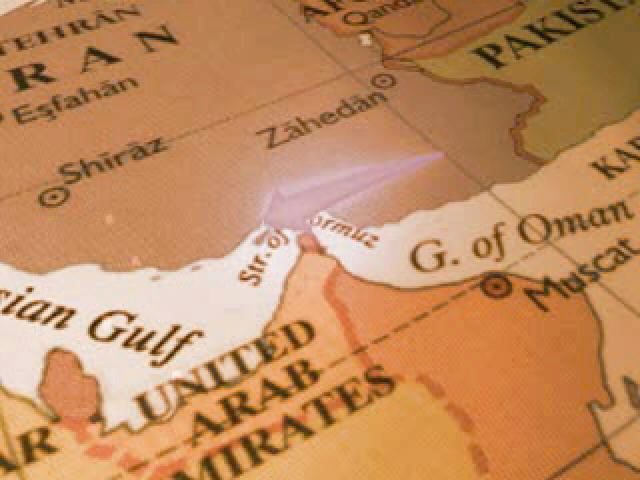 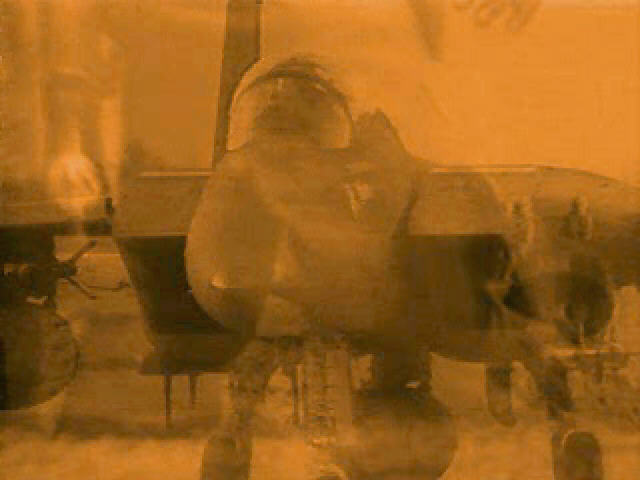 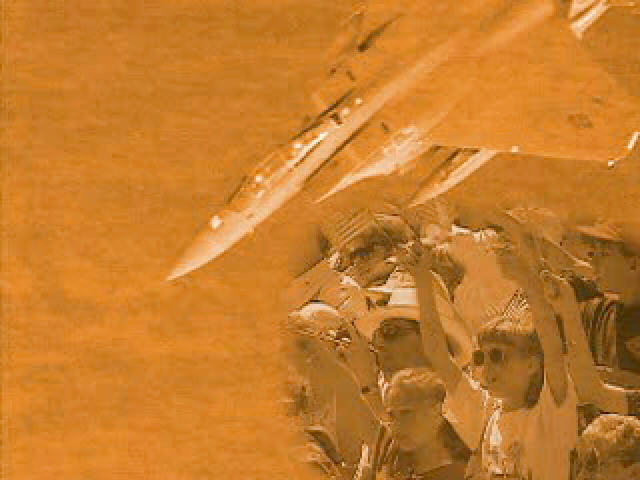 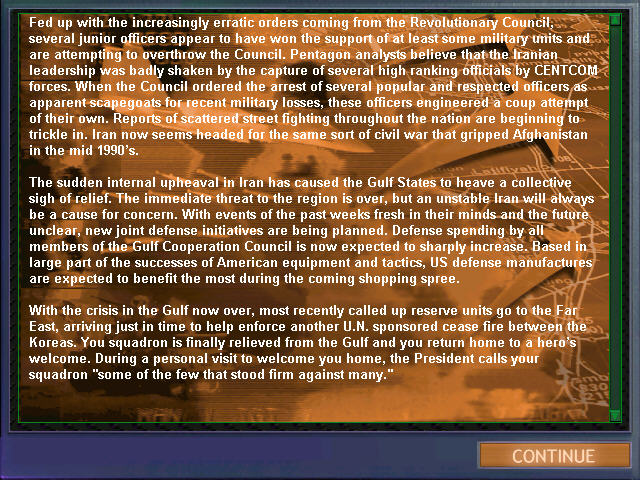 There is another brief cutscene which doesn’t add anything in particular and then a bit more text. It’s not much of a reward for beating the campaign but I’m surprised that I actually managed to beat it at all. I must have failed at least 7 or 8 of the 20 missions while I was figuring out what I was doing so it is extremely forgiving to let me win still.

The campaign mode in this game doesn’t actually allow the cheating that you could use in Longbow (i.e. unlimited ammo and/or invulnerability) so I was expecting to seriously struggle with this and not to finish in something like 90 minutes on the first attempt. I don’t have any real criticisms about this though. The challenge in this game will come from flying the plane itself. I could tweak the realism options to make life slightly harder and go and play it again and each time I’d learn a bit more. That’s assuming that I want to learn how to fly an F-15, which I don’t especially.

I’ve still enjoyed playing this though and have found it a little more accessible that Longbow. I think a large part of that is just that I’m more used to flying planes than helicopters and it comes a lot more naturally. My time on Strike Commander stood me in good stead and with a smoother engine things were a little easier here if anything. The other reason is the relative lack of firepower, compared to an Apache and the automated nature of it. I’m not having to worry about aiming unguided rockets and the like and I rarely get close enough to a target to even see it in this game. In this sense the combat is quite simple, with the real excitement coming on bombing runs on airfields.

That’s one campaign down with one to go anyway. After getting through this one so quickly, I’ll attempt to play through the next in a single sitting as well. I have a feeling it might be a bit trickier.