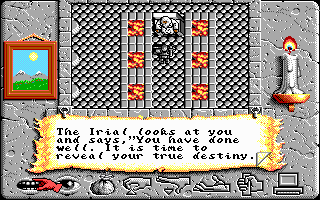 Irial tells me I have to kill the evil clerics off but will first need to fetch the chime from the blasted spot so I can get into the temple. The map has a big crater on it so I head back there with the key he’s given me to get in. 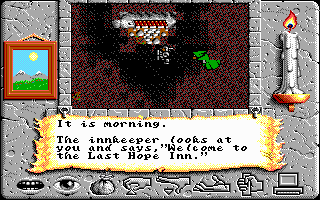 Sure enough, theres a entrance in the middle of the crater. This takes me into an underground section which plays pretty much exactly like the ruins. Its a bit easier this time thankfully. 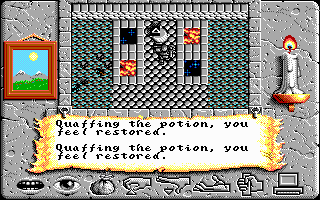 Eventually I get to the throne and find the chime. I pick it up and get out as fast as possible. The monks are at a temple right on one edge of the map. I head for the nearest town to save and trek off to find the temple. 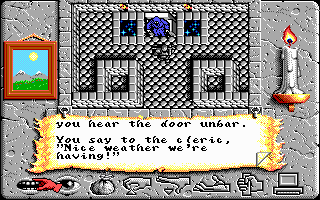 The temples not too hard to find as when I get near there are clerics wandering about. I avoid these and head into the temple. I walk up to the head villain and talk about the weather. At this point I’m killed instantly and have to walk back again. 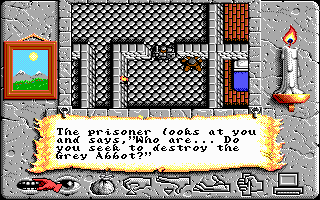 A more subtle approach is obviously required. An exploration of the temple reveals a dungeon underground with a prisoner who tells me how to kill the abbot. Walking round the temple is extremely difficult and skeletons keep coming out of the ground and blocking the path. If my health gets low I head back outside and kill thieves until I get enough potions to get my health back. The crystal sphere to kill the abbot is under his bed upstairs. I grab it then head for the abbot. 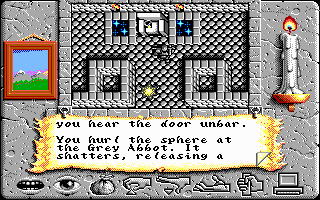 I use the sphere and the abott dies instantly. I then pick up the kings medallion and discover than I am the king after all. 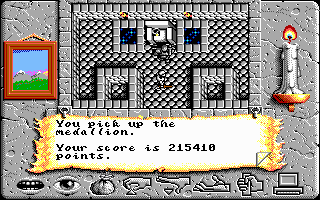 The adlib music kicks back in for the endgame. All the screens from the end are shown here. 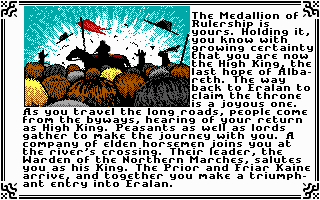 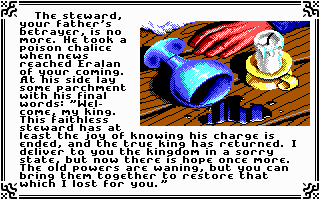 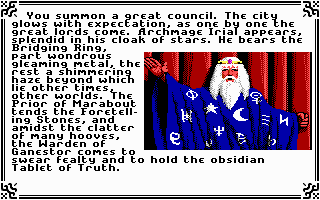 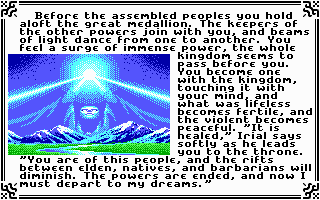 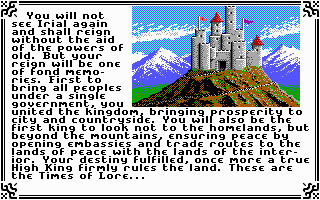 And thats it. This wasn’t a great game but it was also short which stopped me getting too bored or frustrated with it. I was getting fed up of the 5 minute walk to the temple at the end of the game every time I died – much more of that would get very annoying. The storyline was pitiful if I’m honest and the gameplay very simplistic. Its saved by being technically impressive (at least to someone who has played nothing but 80’s games for the last 2 months).