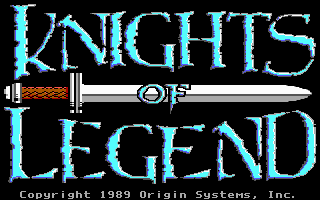 I’ve finally made a start on Knights Of Legend. This is a game I’ve never played even for a few minutes before and is a full on RPG from Todd Porter. The manual is getting on for as large as the one in Omega at around 160 pages and the game looks very big and complex which is probably why I haven’t got round to starting it for a few days.  For such a huge manual there isn’t that much backstory and its mostly about the gameplay mechanics. The level of complexity is a bit overwhelming, frankly. The manual mentions that the game was designed to be modular with plug in addons. These never got made though as the game didn’t sell that well. 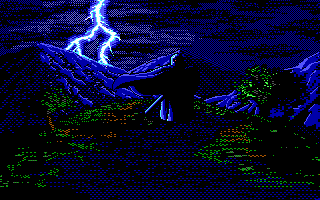 On starting the game there is a nice animated intro with a knight in a thunderstorm gradually getting nearer as it flicks between credit screens. 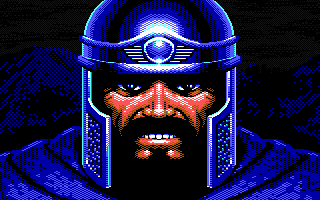 Theres no storyline given as such in the intro which is a bit surprising. The manual gives you a bit of history about the kingdom and mentions that monsters are beginning to reappear and knights of legend are needed but thats about it. Theres no real clue as to where the game will go so its starting out pretty open ended. 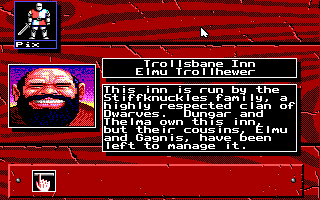 Character creation gives so many options for races and professions, its hard to know what to pick. I’ve attempted to get a good range of characters. You have a party size of 6. You start the game out in a pub with the one character, who can then recruit any others you have created from the same pub. The graphics are really nice for EGA. You get pictures of everyone you talk to, any buildings before you enter. The interface is mouse driven using icons at the bottom of the screen. 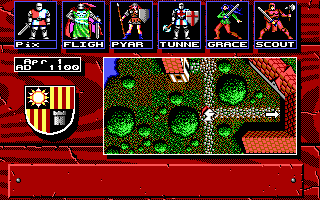 I gather my party and head out for a look around. The world graphics don’t scroll smoothly, its back to one tile at a time like Ultima. They look great though for the time. You can wander to all the houses in the village and talk to people. You can just chitchat or use keywords (typed in) to get clues. At this stage, I’m just trying to get a feel for the game so I head out of town to find a fight 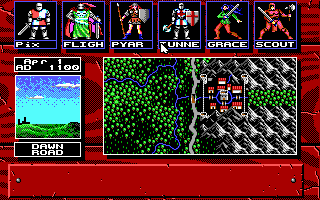 When you get out of town, the map switches scale. Your party here is represented by a small dot that moves a pixel at a time. You automatically camp at night, which since it takes days to get anywhere is a good thing. 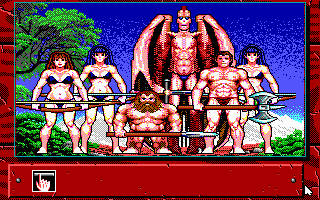 This is my party as it started out. They aren’t wearing much so I’ll have to do something about that some time. 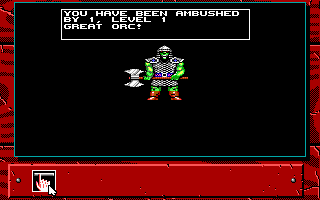 It takes a while but I eventually run into an orc who promptly slaughters me so I read the combat bit of the manual and start again. You can only save in this game by sleeping in a pub (which costs money). Curiously you have to pay and save each party member individually, which gives me an idea. I figure you can give loads of good equipment to a dummy party member, save him, give his equipment to someone else, sell it, save the guy with the money and repeat. This works fine giving me a great starting point to the game and an infinite supply of cash. When I get some decent artifacts I’ll be able to duplicate them in the same manner.

I get myself about 30000 cash in this way, buy some armor for my frontline fighters and set out to do things properly this time. 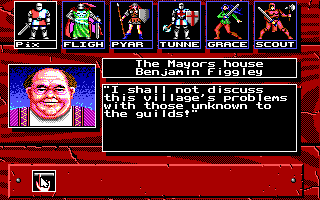 I talk to everyone in the town. The mayor won’t talk to me until I know the guilds. Elsewhere Stephanie tells me about a missing gavel stolen by ruffians and gives me a quest to get it back. I don’t have any details of where to go though. 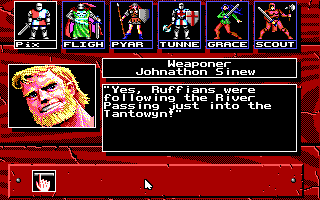 Asking around about ruffians gets me a clue from the blacksmith. The people in the towns all stay indoors all the time as far as I can tell. You have to go into their house to talk to them – no one is on the streets at least yet. 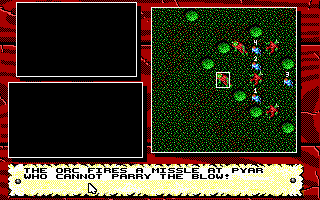 I head back out to have a go at this quest and bump into a party of six orcs. I’m a bit better equiped to deal with them this time. The combat system is very very complicated. For example to attack an orc with my axe I have to choose to attack, then choose direction, then choose what type of blow, then choose part of the orc to aim at, then choose my dodging strategy, then approve it. I may get quicker when I get used to the system but this one battle took 10 minutes.

It uses a turn based system, where you decide actions then they are carried out one by one according to speed. If the orc moves before you strike then you miss it unless you were aiming at the empty square. One of the stats used is foresight which allegedly will give me a clue of where it will move if I get it high enough.

All actions cause fatigue which can make you collapse it seems and reduce your chances of hitting or dodging. 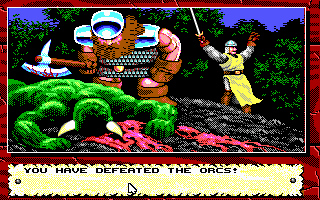 I beat them in the end and theres a nice graphic to show it. 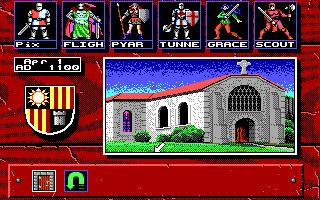 Its back to the town to try and heal now. At the local abbey the monks help me out for a price.

I’ve not really even got started in this game but I’ve spent a few hours on it with the manual and just walking about. It’s pretty difficult to get started when the mechanics of the gameplay are so difficult to get to grips with. I’ve heard people describe this as their favourite RPG of all time – I’m undecided at the moment. If I get into it, I could see me liking this game. If I don’t the size and speed of it could make me hate every minute. From what I’ve seen there are a couple of weeks worth of gaming here.