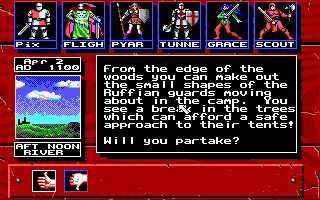 Finding the location for the first quest wasn’t too tricky. I just followed the river down and eventually got the above message. 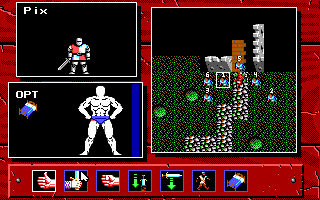 Completing the quest is just like a combat screen only the map is much more detailed. The ruffians are holed up in a bit of fortress with drawbridges and the like. I adopt an ambush strategy where I sit all my party at one end of the drawbridge out of sight and then send a fast character to run round the map attracting guards and getting them to follow me back over the bridge. 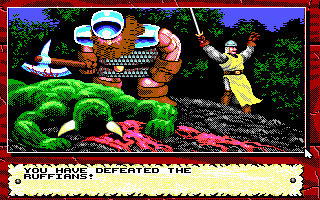 This strategy works well enough but the time taken to complete the quest is enormous. I don’t think moving my party in would really have been much faster though as I would have to set their moves every time rather than passing for 5 of them and just having the one character run around. This quest took me around 2 hours+ to play through, all of which time I can’t save. If my party had been wiped out on the way back to the town the whole session would have been lost. This is just ridiculous. You are looking at a 2-3 hours session to attempt one of these quests. I really hope I find some great weapons at some point that are going to make my life easier. 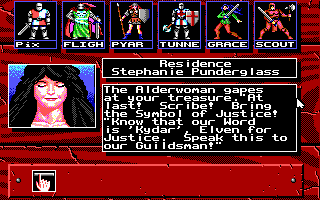 Theres no great reward when I get the gavel back – just a password. 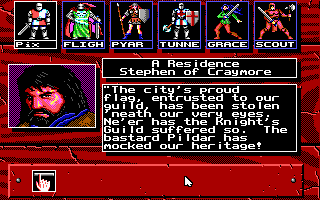 Elsewhere in town, asking Stephen about his standard gets me another quest. 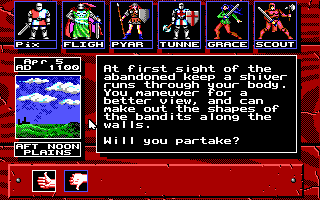 Everything here works the same as last time. I have to ask around town to get a clue of where to go. Then I go there, get a message and get a similar but different combat screen. Again it takes 1-2 hours to play through. 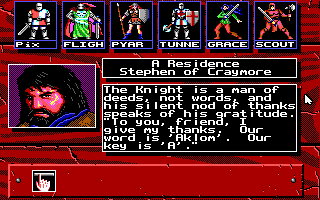 A pattern is emerging here as when I get back I just get another password. 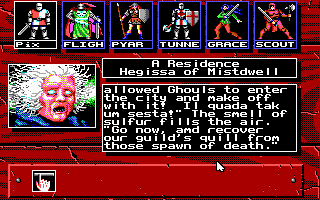 Another house in the same town, another quest to pick up another object… 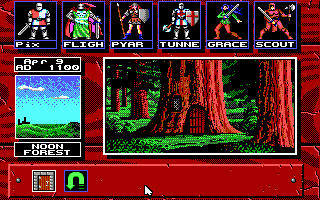 I set out to try and find the spot in the woods for the next quest but am set upon by one lot of monsters after another before I get there. I do find a tree with an elf in it who gives bow training. I train up my archers a bit here but he refuses to train one of them till she’s been to the arena. My party is half dead by now so I head off back to town rather than attempting the quest. 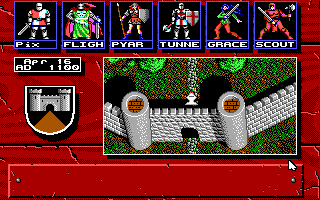 Its as near to the big town in the middle of the map, so I have a bit of a wander around there instead. Unfortunately I have no money as I’ve had to run from battle just to survive this long (thereby dropping half my stuff). There isn’t much I can do for this reason so I have to trek back to Brettle (the original town) instead.

I’ve started to get a bit of experience by now so I go off looking for the arena. Its north of Brettle, I put my two qualifiying characters in there and they each have to fight a single monster 1on1. 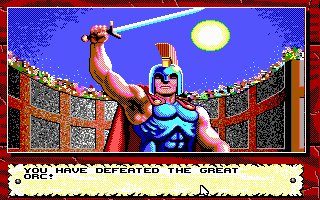 Its easy enough and I win both of them. Unfortunately my whole party gets wiped out on the way back so I will have to try this again next time I play.

The speed of this game could drive me nuts before I finish it. The combination of 3 hour play sessions and ludicrously slow combat might mean I take a month+ to finish this. I’m sorely tempted to either cheat or just skip this game altogether but I’ll stick with it for now. If I ever win one of these 2-3 hour battles and get my party wiped out afterwards, I may change my mind.