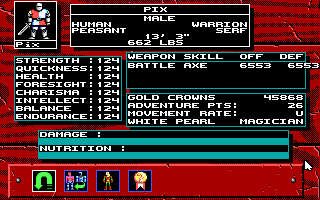 I’m sorry to say that I’ve given in on attempting to play this game properly and have resorted to cheating by hacking my save game. As far as I’m concerned Knights Of Legend is gaming hell – its the slowest most tedious game I’ve ever played in my life. I can see why the planned sequels never got made. I don’t plan to make a habit of cheating on any of the other games but I’m supposed to be enjoying myself here and can’t cope with another month of this crap.

An FAQ on the web gives detailed hacking instructions so I max out all my stats and weapon skills yet I’m still not that hard!!!! I also have to hack the weapon itself. As soon as I do this however I can now kill pretty much anything in one hit. This means I can ditch my party and just use the one character to complete all the quests. 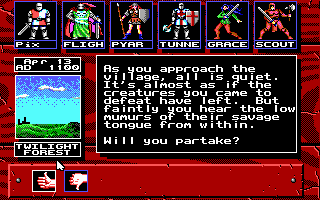 I make my way to the next quest location. 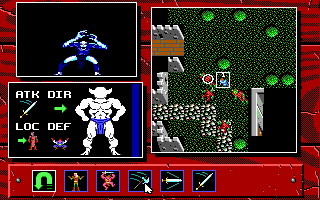 The enemy don’t stand a chance now and I mow them all down. I still end up searching around the map for the last few but get them all in the end. 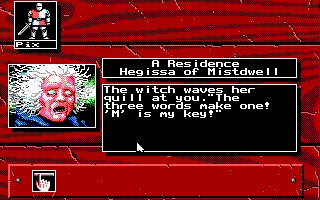 I get another password and letter when I take the quill back. Now I know the words the mayor should talk to me. 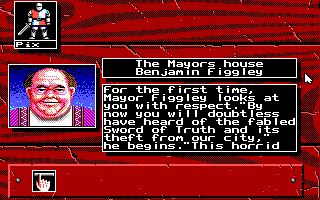 I combine the three quests to make the word kam, say it to the mayor and he gives me another quest to find a sword. 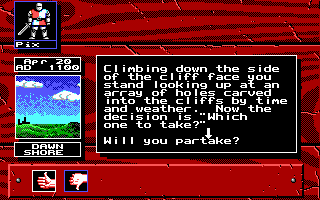 I have to trek right down to the south coast this time and climb some cliffs. The map layout is a bit of a variation on the last few with a series of tunnels dug out of the cliff to explore. It still amounts to wandering around until I’ve killed everyone. 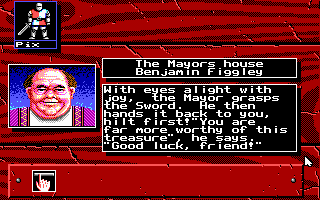 I get the sword, take it back to the mayor and he gives it to me.  I’ve run out of quests in this town so I’ll head somewhere else next.

All these quests are utterly formulaic and pretty much identical. Basically its say the keyword to someone, they send you after an item but don’t tell you exactly where, you ask people about whoever stole the item and one of them tells you where to go, you trek there, kill everything, trek back, repeat. Its utterly formulaic and judging by the rest of the game I really don’t expect to see anything new at any point as it would be verging on fun and therefore out of place.  Apparently there are 24 of these quests I have to complete and I’ve so far managed 4. Even using just the one uber player + walkthrough, I bet this game still takes me another 10 hours+ to finish.  I can definitely cope with it now, however, and can knock it off a bit at a time in much shorter play sessions.