This is my first post in over a week as my isp has been down for ages after a spam attack. I’ve also only had a couple of sessions on Ultima 5 in that time, I spent way longer than I expected on the HTPC as some of my hardware was faulty. Its all sorted now at least so I will have more gaming time. I’m only counting days I actually spend some time on a game hence the last week only being 2 days. 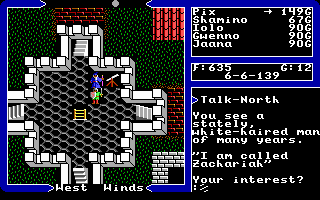 I’ve not taken notes on my way through so writing this days afterwards isn’t going to help this post any but I do have a bunch of screenshots at least. I’ll apologise in advance as this entry will be fairly incoherant but I’ll go back to writing them the day afterwards now the site is up again.  Since this games been blogged twice anyway, I’ll keep this relatively brief. When I started out again, I set out to explore all the towns, gather clues and items, etc.. This was probably the first time I’d really enjoyed playing the game so far. The characters in the towns have more to say and are fleshed out somewhat compared to U4. 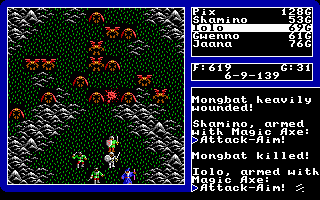 I went round most of the towns, then decided to take a jaunt into the underworld and sailed through the whirpool. The underworld is vast (the same size as the main world map) and full of monsters in huge parties. Most of them are taken down pretty easily with magic axes and I manage to find the shipwreck of Captain Johne. 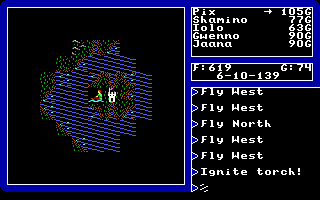 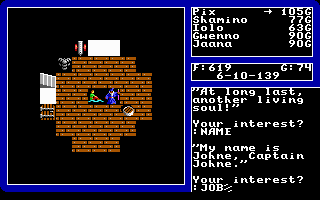 Apart from joining my party, Captain Johne gives me a load of backstory about how the 3 crystal shards made him kill his shipmates and in turn created the shadowlords. 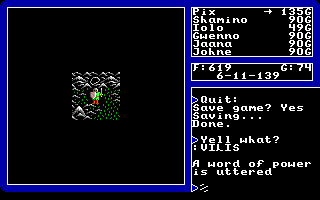 Having found Johne the next thing is to get out of the underworld again. I eventually find a dungeon entrance and one of the words of power gets it open. 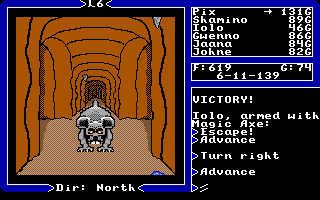 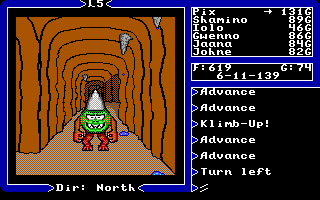 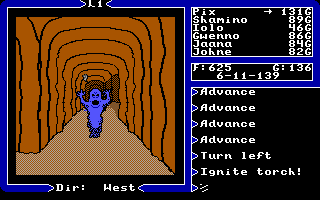 This is my first trip into a dungeon. The first thing that strikes me is just how much better the graphics are. These actually look pretty decent – really not far off the likes of Dungeon Master. The improvement on U4 here is huge. The dungeons have far fewer rooms to get through this time, and don’t seem to contain items like chests. I have seen fountains but if there is a key to drink from them I haven’t found it. The dungeon turns out to be pretty easy and I get out without too much trouble. I have of course lost my ship now, but nearly all the map is avialable with the magic carpet anyway. 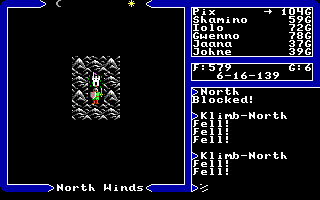 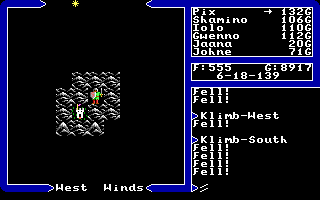 I got a grapple in one of the towns which I now use to get to a couple of previously inaccesable towns on the map. The grapple just lets you climb small mountain squares. From stonegate (the home of the shadowlords) I picked up LB’s sceptre which will allow me to dispel magical fields. I managed to run out of skull keys after I’d gone in and couldn’t get out again due to the reloading locking all doors bug. I had to resort to killing off my party again to get out. 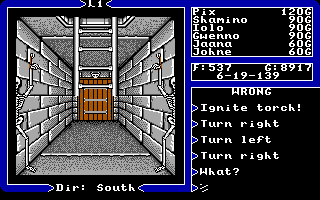 I decided to have another go at getting some items in the underworld. The next dungeon had significantly different graphics to the last being all brick and skeletons rather than a cave.  I used level down spells where possible to make life easier. 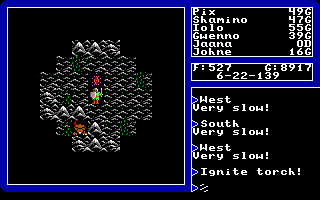 It took some getting to and a lot of grappling but I eventually found one of the shards. 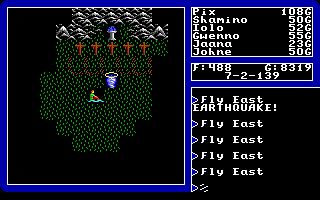 I also found the amulet of LB along with a load of graves, after a trip through a huge number of waterfalls. 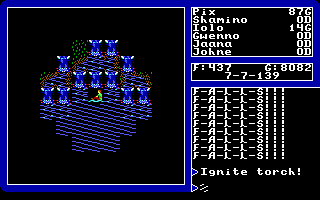 Getting back up a dungeon proved tricky, and my party died for the cause once again. I went down through other dungeons to get the other 2 shards, and also got some exotic weapons from the middle of lava pool. 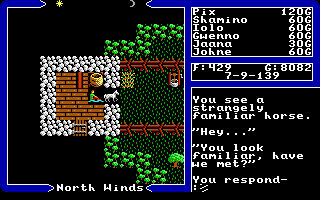 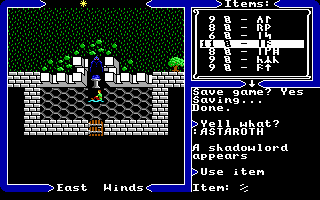 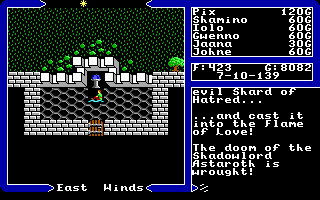 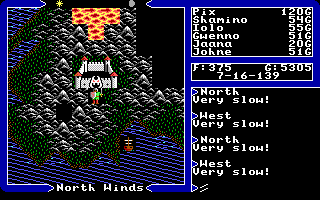 Once the shadowlords are all gone, I make the trip to Blackthorns castle. This is a huge 5 level building which takes some exploring. 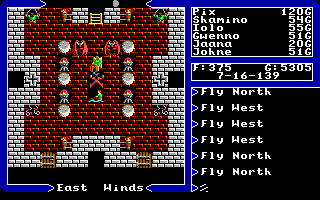 You get to meet Blackthorn himself, although he isn’t too hospitable. At the top of the castle I find the crown of Lord British. This is the final artifact I need to complete the game.

This is as far as I’ve got. I’ve done everything I need to do to complete the game, except my party are all still level 2-4 and nowhere near strong enough. All the dying in the underworld really hit their experience just as I was starting to get it higher. My next task will be to grind up their experience to something decent which I expect will take ages and not be all that much fun so I can’t say I’m looking forward to it that much. I think I made the right decision to cheat on this game last time as it would be more fun. I’ll persevere and see if I can’t get my party ready for the final dungeon tommorow night.