So much for finishing this game off yesterday. It started getting a lot tougher and there was way more of it left than I thought. I’m sure I’m nearly there now though. 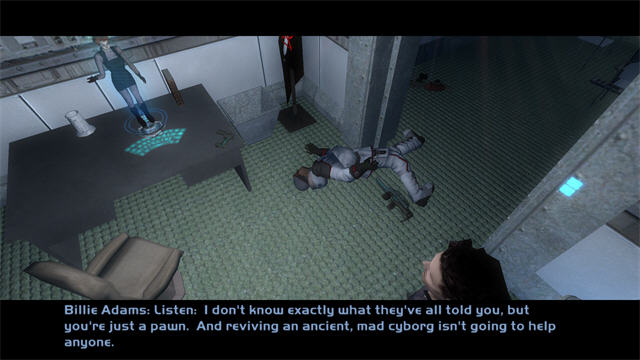 Billie wants me to go to a nearby hut and talk to her. I have to fight through all her Templar buddies to get there first which isn’t perhaps the best way to get me over to her side. All the people involved are spending a lot of time trying to talk me round by this stage of the game though. In some ways I can sympathise with the Templar view more than any of the others but not with the people involved or their methods. 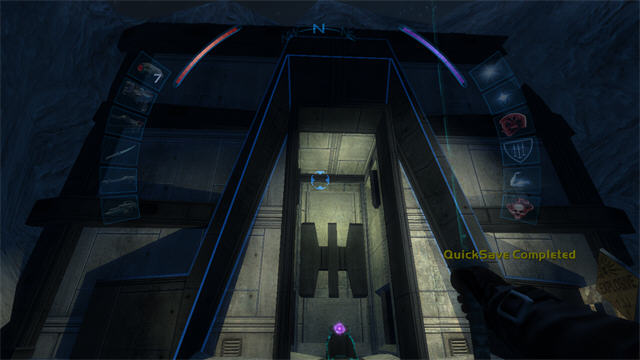 I keep making my way towards JC and run into a load of armoured troopers. These guys are extremely tough and I can’t use my sword on them as they explode on death which means I get taken along with them. They are easy enough to take out at distance but I go through ammo a lot quicker than I would like and I’m very low by the time I get to the end. 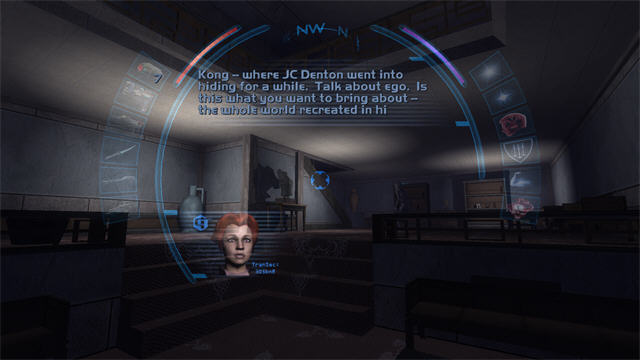 I get into JC’s habitat. This is a strange section where I get to walk between a few locations that JC has made from his own past. This would be an opportunity to revisit a past level like the end of System Shock 2 did so well but the locations don’t ring any bells for me and they are very small.Each section gives me the opportunity to climb down, fight some greasels and grab goodies. I do this in the first one but it only nets me more biomods and weapon mods and I don’t need either at this point so I don’t bother exploring the next two. This means I only have to simply walk between locations. 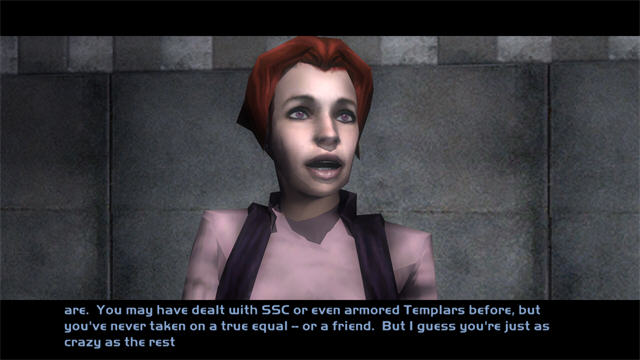 At the end I run into Billie. I either go along with her or fight her at this point. I say that I’ll try not to kill her but I don’t have a lot of option all in all with the weapons I’m carrying. She is surprisingly easy to fight and I’ve got her on the run after maybe just a half dozen sword swipes. 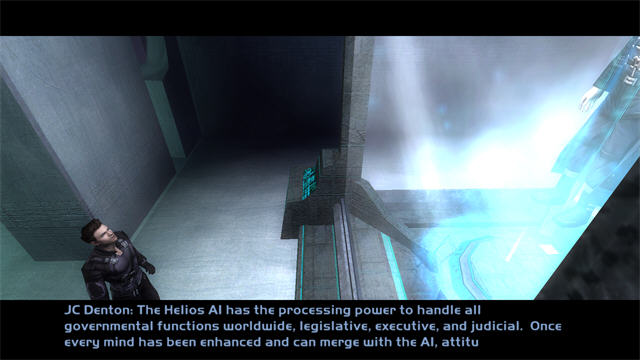 JC is now waking up and I go to talk to him. He explains the plan which appears to involve the whole world becoming modified and joined together, not in a collective consciousness as such but with JC being able to monitor each persons thoughts and rule accordingly. It could work well but you would have to be damn sure about JC being trustworthy. It’s a serious invasion on privacy and individualism but I’ve pretty much decided to go for this option as it is the best I’ve got but I have major reservations. 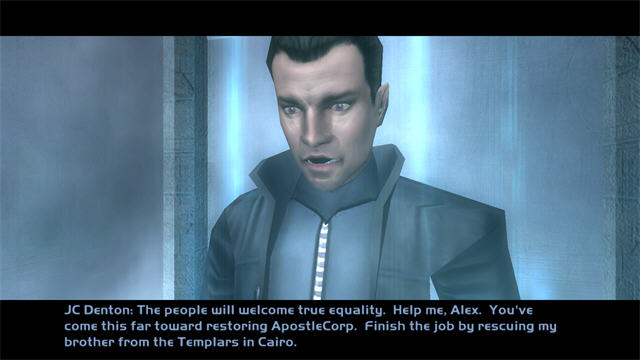 He sends me off to rescue his brother Paul who is being held by the templars. This is something that has been bugging me throughout this game. Didn’t JC’s brother die in Deus Ex? I certainly remember finding his body and if there was anything I could have done to protect him I can’t think what it would have been. Anyhow he is alive now and made a failed attempt to revive JC a few years back after which he was cryogenically frozen to keep him alive. I think I need to use my biomods to revive him in the same way as JC. 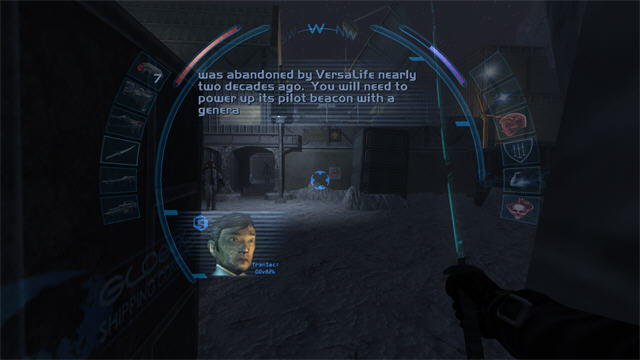 A load more of those armoured soldiers appear on my way back out. Saman wants me to talk to him in the same place as Billie talked to me earlier but there are too many troops and I have very little ammo left so I have to just run through this area to get to an abandoned Versalife base. One of the advantages here of the small levels is that all the enemies in the last one can’t follow me through. If it wasn’t for that I would have been in real trouble. Now that I’m here I have to get the pilot beacon working so that Ava can fly me out. 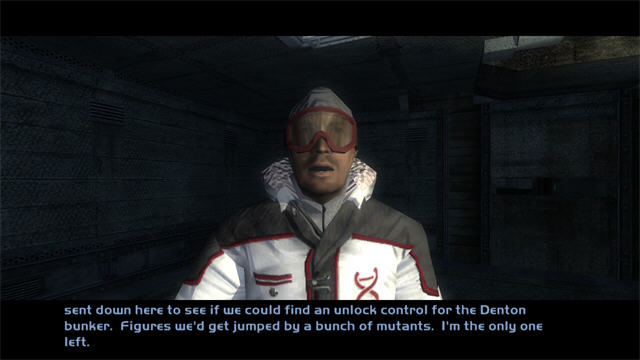 This facility is where Greasels were developed and I have to get all the way through it to turn on the power. On the way, I find a Templar who has been trapped in a cage while running from Greasels. He wants me to let him out and is all magnamous until I pick the lock and he then instantly turns on me, making me wish I hadn’t wasted a multi-tool on him. 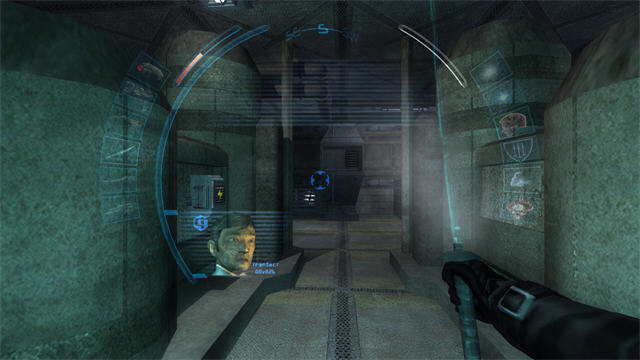 The generator is nearby and I power it up. 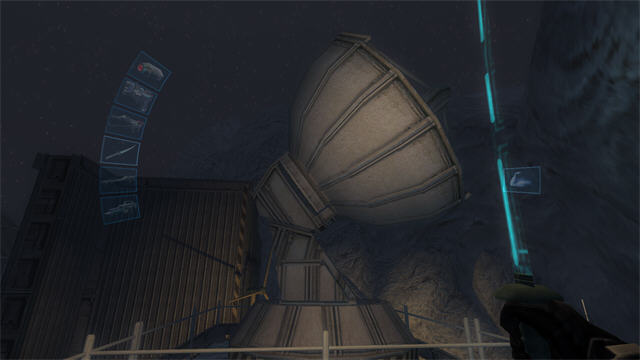 I power up the beacon as well and Ava flies in and takes me back to Cairo again to attempt to rescue Paul. I’m told on the way that the Templar’s have completely taken over there and it will be very hostile. 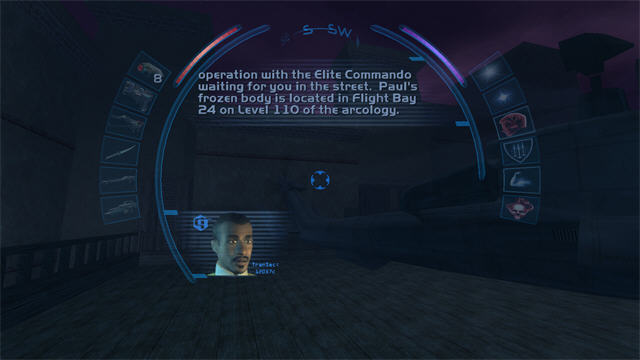 The Illuminati want me to destroy Paul. It looks like my choice of ending is going to have to be made soon. They send an elite trooper to help me out who I’m told to meet in the Medina. 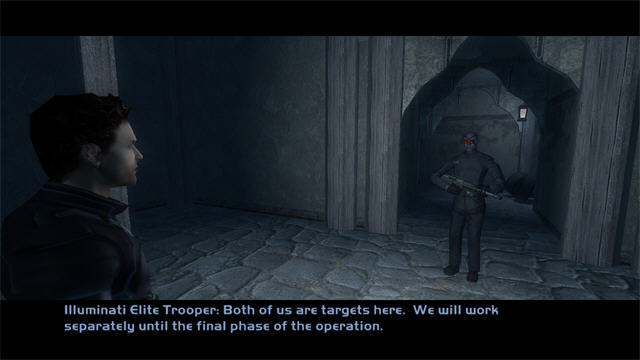 I play along with this plan and act as though I’m going to follow orders although I have no intention of doing so. 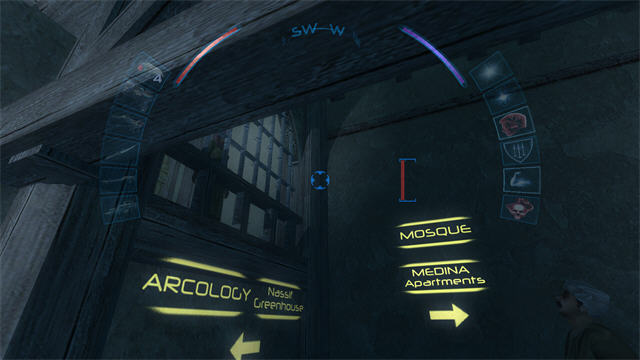 The nearest lift to Arcology is guarded by more armoured troops although I don’t know why they bother as it’s out of order. I’m forced to go through the mosque instead. On the way I see these two discussing how the plague has gone since I released the cure. This is the only reference I ever here about this and is a bit of a token effort. 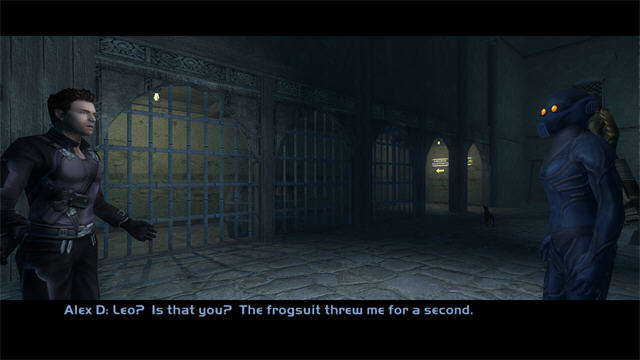 Leo is infront of the mosque and is looking a bit different. He is now part Omar and they are about to fully transform him although he is now talking about backing out. I offer him some money to help him get out of here as they are threatening to complete the operation while he is asleep otherwise. He arranges to meet up at Liberty Island which is where I’ll be heading after I rescue Paul. 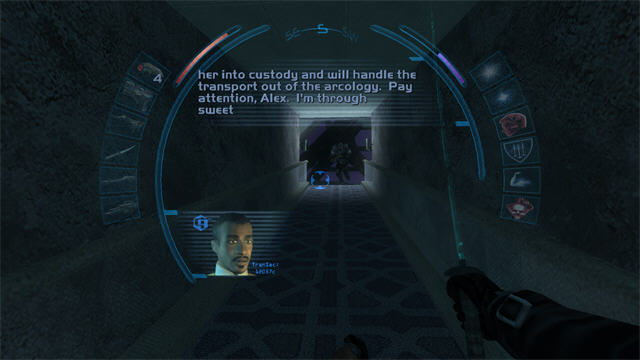 I head through the mosque and take the lift into Arcology. The chairman claims to be holding Klara as a hostage to ensure my cooperation so I have another mission if I want it to go and rescue her. 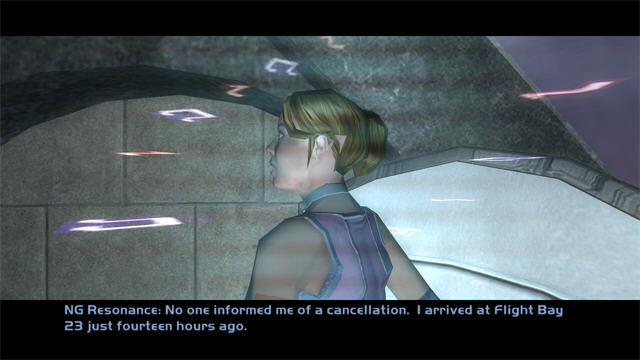 I make my way through a lot of Templars and talk to the NG Resonance AI. I learn that she is apparently being held here in Arcology although I manage to complete the level without finding her so I never do complete this sub mission. 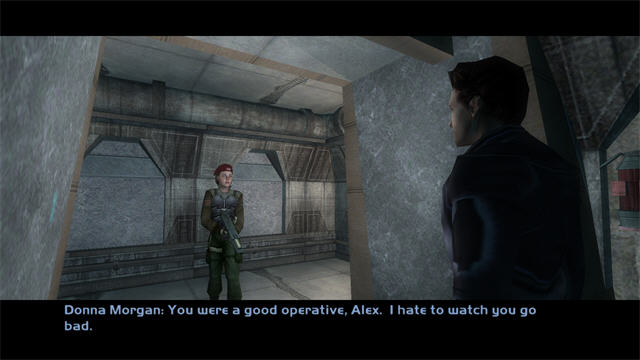 I hack my way into nano-bot programming to try to find Klara. The chairman claims he was bluffing when I arrive but I’m then forced to take out Donna Morgan as well. 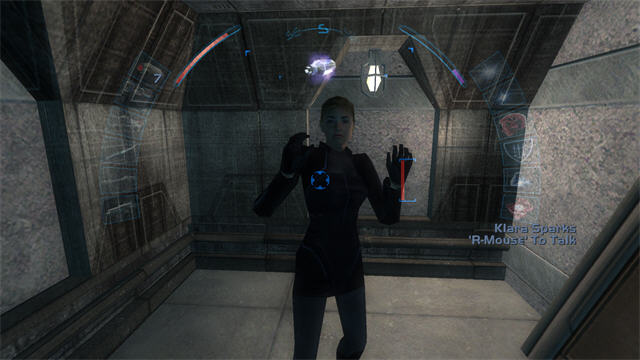 Klara is in here but she just looks scared and doesn’t say anything. Not sure if this was a bug or if she didn’t want rescuing or what but I may as well not have bothered with this mission by the looks of it. 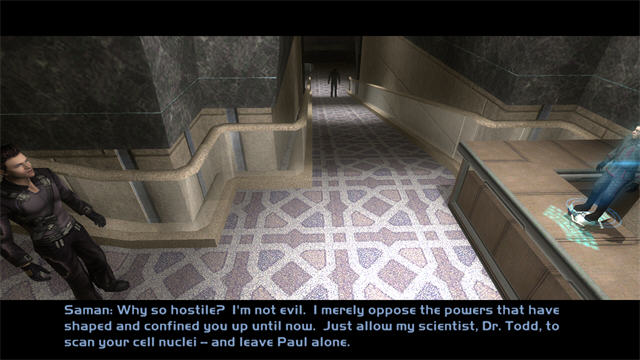 Saman contacts me next. He wants me to join the Templars and submit a sample of my blood so he can analyse my biomods. I’m not going to agree to this. 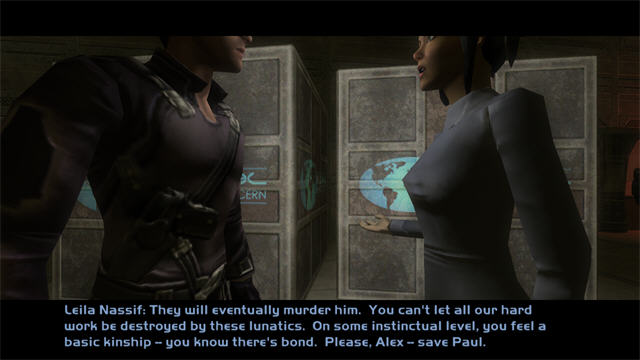 I can walk around with the Templars attacking for the moment, while they wait for me to head over to bay 24 and donate some blood. In the other bay I find Dr. Nassif who tries to talk to me around to JC’s plan to save Paul. She is being held with a few others in this bay and waiting for rescue but the beacon needs activating. 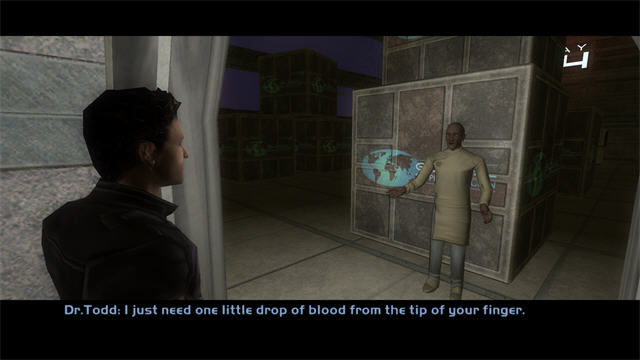 I head for the other bay, refuse to give blood and end up taking fire from all sides when I have to fight my way out again. There was a recharge bot in the other bay so I don’t have to worry about using up all my energy and that makes it a much easier fight. 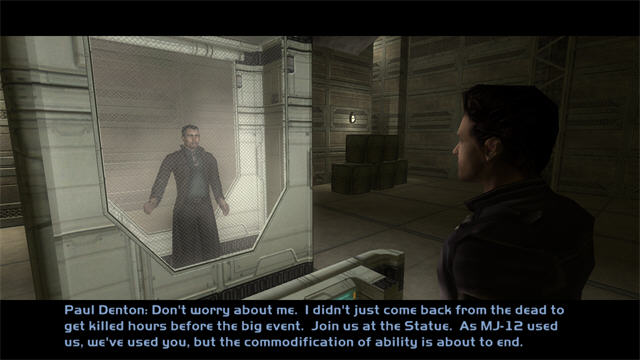 I revive Paul and inform him of the plan which involves all of us heading for Liberty Island. I just leave him in his crate for now and I’m told by JC that he will sort out his extraction. 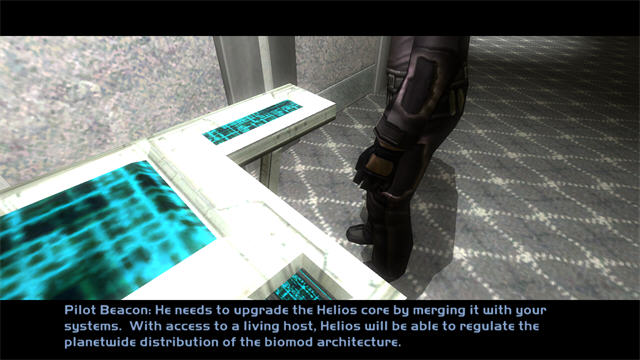 I find the beacon and activate it. I’m now told that Helios will have to merge with me also but I’m unclear to what extent since the plan would involve Helios merging with the whole population anyway. I’m going off this option all the time but I’ll follow it through now I’ve started. 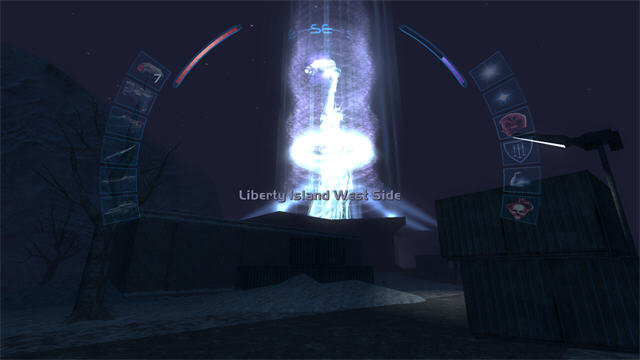 I’m instantly transported to Liberty island which seems a bit strange as I’d expected to have to walk to my helicopter at the least. The statue of liberty is looking more than a bit strange and it looks as though JC is going ahead with his plan. I’m told by him to head into UNATCO and find the plans for the Aquinas protocol.

This was a long session and I’m clearly still a reasonable way from the end so I left it here for now. I think this time that I really will finish the game in the next session. IW isn’t half as short as I’d been led to believe it would seem. I’m not too struck with the options I’ve been given for an ending. I don’t especially like any of them. In the first game I could make a case for each option possibly improving the world but here it seems like the choice is which flawed character I want to hand over control to. Whether JC is still JC or not is yet to be seen but he certainly appears to be a better choice than Saman or the Illuminati who have both proved themselves untrustworthy.

I’m 9 days in and this game has failed to entirely grab my attention. I still blame the loading times more than anything here. Dropping to the desktop and having a 30 second wait every time you die is not my definition of immersive. There is something slightly unsatisfying about the plot also. When the characters in the game describe me as a pawn they aren’t kidding. I just get to choose who pushes me around and it isn’t a great position to be in.

Whatever the reason, I should be desperate to finish the game at this point but I find that I really don’t care and will be glad just to get it out of the way. Deus Ex grew on me but it just hasn’t happened with IW. I wouldn’t say that I dislike it, this is still a decent game but not one I would go out of my way to recommend. It is definitely missing the spark that was in most of Origin’s games.