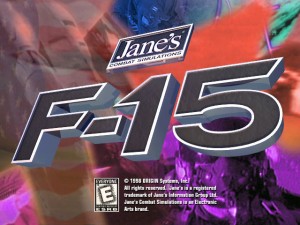 This is the last Origin demo which I’ve been able to locate so if anyone has any more feel free to send them my way. It’s another flight sim so I’ve only had the briefest of looks at it.

It’s a similar demo to the Longbow 2 one, only this time there are clear mission objectives. The task is to take out a chemical weapons factory.

Even defaulting to casual mode, being dropped straight into a sim like this can be daunting. The wise decision was taken that the demo would run on autopilot, unless you choose to move the joystick and take over control. When on autopilot, the demo swaps views constantly to show all the different planes, ground vehicles and buildings.

There is a ton of opposition and friendlies around to show off as many game objects as possible. From a modern standpoint, some of the autopilot views possibly don’t show the engine in it’s best light. A building close up is a rectangular block but you wouldn’t normally be so close for this to be apparent. It’s still impressive enough judged against other games of the time but however pretty the engine, it’s not all that likely to win me over to the genre.

This doesn’t mean the end of the demo’s as I have a pile of Looking Glass games still to go among others but I’m long overdue to get stuck into a full game. I’ll have a quick look at any Terra Nova demo(s) I can dig up and then pick the next one off the list.