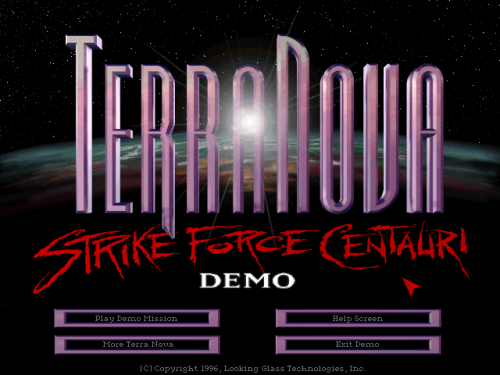 I’ve got two demos for Terra Nova and have uploaded both for anyone who wants to try them out. This first one was taken off the May 1996 PC Zone Cover Disk and features a single unique mission. 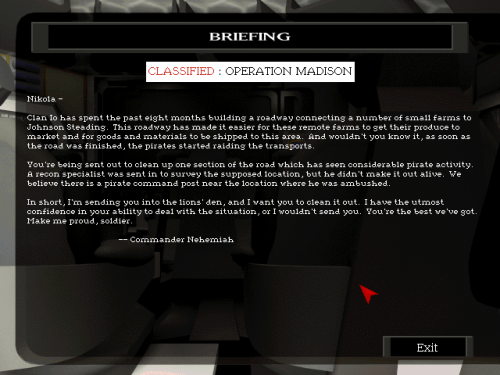 In the mission, a new highway has been opened linking together some farms. The convoys on this road have come under attack by pirates and it’s up to me to take them out.

I remember the missions at the start of the game being incredibly short 1 or 2 minute affairs. This is considerably larger with a large map to explore and plenty of opposition. I wouldn’t say it’s tough but I couldn’t just walk in and finish it on my first attempt without learning my way around the controls and techniques again.

I don’t get a team to help me out so I have to be a one man army in this mission taking out a dozen+ pirates on my own. They usually only attack in ones or twos making the task much easier. Sidestepping is very effective in this game and provided I keep my distance I don’t get hit much. The terrain shows off some of the better aspects of Terra Nova, with deep canyons and bases hidden in quarries. It’s a lot less flat than I might expect in an early 3D game.

The main opposition is right at the end of the level with a pirate captain + a tank lobbing shells at me. I’ve had enough practice to get through this unscathed and the drop ship comes in and picks me up.

This is well worth playing and definitely recommended. I was a little disappointed in Terra Nova back when I played it, partly as it had been sold to me as having the FMV production values of Wing Commander 3 (which it didn’t), and also because it didn’t have the depth I expect in a Looking Glass game. However, it is still fantastically good fun if you just fancy blasting some mechs. I definitely went into it with the wrong expectations first time around. It did have tactical aspects also with a strike team to command although those weren’t shown in this demo.

I recently purchased a VFX-1 headset on Ebay (spending way too much money in the process as usual) and Terra Nova is one of the supported games. I’ve had my eyes out for one of these for years and it was one of my reasons for wanting a working DOS PC in the first place. In the case of Terra Nova, it doesn’t work in stereo-3D but does have built-in support for full head tracking and this is definitely one of the games I’m most looking forward to trying out. I can imagine this playing extremely well if I’m able to look around independently of movement and it should be great fun if my neck and eyes will take the strain. It was only posted today so I’ve got a couple of weeks waiting before I can find out.