It already seems a long time ago but just over a week back, I got the unlikely chance for a tour of Portalarium and questions with Richard Garriott. The offices are on the 7th floor of an unassuming office block in downtown Austin. 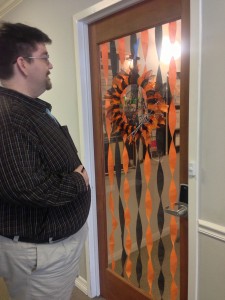 They had just put the Halloween decorations up when we arrived. Letting LOAF lead the way, we were ushered into a small conference room barely big enough to get us all in. It was immediately apparent we were in the right place though as there was an entire wall of Ultimate RPG concept art on the near wall. I’m unfortunately not allowed to talk about this but I can mention some of the other adornments such as the original Ultima 9 tapestry artwork and a trio of cover art pictures for Chuckles’ 3 games including Caverns Of Callisto:- 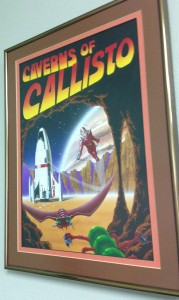 A brief wait later and we are getting the tour from Richard Garriott himself. The hub of the tour is a central corridor in which Garriott has placed some of the significant items from his gaming history. The plan is to bring more of this collection out of storage as Portalarium and the offices grow but even now it’s still the sort of display that any Ultima fan would have to remortgage their house for:- 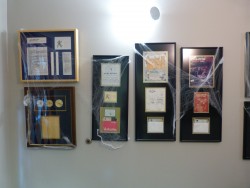 This is the first section with the bottom left being some of Garriott’s pre Akalabeth games on paper tape + his written out code which never got punched in. The earliest Computerland Akalabeth case contains a version on cassette as Akalabeth actually predates the Apple II disk drive. He doesn’t think he sold any of these but wasn’t entirely certain so there may be one out there somewhere.

Going further down the corridor there is the original artwork for just about every Ultima game as well as some Destination Games displays but I don’t have photo’s to share unfortunately. 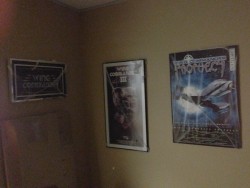 For the Wing Commander fans, in the next room off to the side there is some more artwork including the original Wing Commander logo as well as a very familiar looking Wing Commander Prophecy movie style poster. Also in this room is Garriott’s pre Akalabeth D&D games map which was fairly massive and had some very familiar town names. He explained that it formed the basis for Ultima 1 although interestingly it was more or less all one large land mass. This fits in with an ancient RG interview I read elsewhere that Ultima 1 & 3 were in fact based on the same game map with the 4 continents of Ultima 1 being chopped up/rotated around versions of the same world as Ultima 3. This looked to fit with what I saw but I wish I grabbed a photo. Maybe next time…

We strolled through some of the developer’s offices after this. One of them was working on removing the Garage Sale text from the Ultimate Collector artwork so it looks like it’s going to have a name change. The name Ultimate Collector was apparently “borrowed” when a TV show of the same name contacted Garriott and he liked the name so much he thought he would use a variant on it. 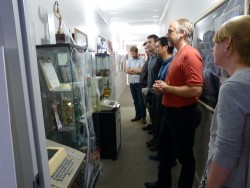 The Portalarium offices are quite a modest affair at the moment and we were soon back in the main corridor where at the far end there is the original Apple II used to write Akalabeth and the early Ultimas, permanently set up running Akalabeth these days. There is also a small but growing new collection of toys which has been inspired by all the cool items the team has come across making Ultimate Collector. Another recently acquired item is a teletype machine exactly the same as the one used to punch in the pre-Akalabeth D&D games.

With the tour concluded it was back to the conference room and a Q&A session. I can’t speak for everyone else there but this isn’t the sort of thing I’m used to and it’s hard not to get more than a little starstruck. It’s not like RG isn’t an easy-going sort of guy but I’ve thought of a lot of questions I should have asked afterwards. In no particular order, this is what I remember from a week later much of which I’ve already covered in a previous post.

One of the questions that came up was whether he would be able to help track down a copy of Wing Commander 2 on the SNES. This has been a holy grail for Wing Commander fans for a long time. The game was sent out to reviewers and full write-ups appeared in magazines back at the time but it never went on general sale. It even had some enhancements to the original version such as colour communications screens. The good news here is that RG was extremely positive that he may have a copy. He said that he made sure to get a copy of every Origin game and 10 copies if it was Ultima and thinks that with WC2 getting that far he will almost definitely have it in storage. The downside is that he wouldn’t just let us rummage around for it so we will have to wait some time.

I took the chance to ask if that could also mean he had a copy of The Lost Vale. He didn’t think it had ever got finished but I’d take the word of Sheri Graner Ray here and assume that he just didn’t follow it too closely at the time. Going on what he said previously, there must be at least be a slight chance that he may just have a copy but we’ll have to wait for that alongside WC2 SNES.

There was some talk about Ultimate RPG although it’s clearly in an early stage. He discussed how Portalarium’s Poker and Ultimate Collector games are necessary building blocks towards the technology needed to make Ultimate RPG within a small company like Portalarium. He confirmed that he would be appearing in Ultimate RPG and it would always be him playing his own character just like in Ultima Online.

Inevitably there was some talk of space travel (which he thinks will be as affordable as a first class airplane ticket within 20 years). Although he is now an employee of NASA, it turns out they were less than helpful with his journey to the space station despite the fact that he was doing experiments on their behalf. I gather that NASA didn’t want to be seen as spending USA tax payer’s money on “some rich yahoo’s” jaunt into space.

For instance, Garriott had to sign a fairly standard disclaimer before travelling to the Space Station. NASA never got around to countersigning this and 3 days before the flight tried to change the terms so that RG wasn’t allowed to take photo’s through the windows owned by NASA, take photos of the NASA owned portions of the station or actually go on the NASA side of the station in the first place (more or less negating the first two). The rest of the astronauts thought this was as ridiculous as he did and advised him not to sign it since they could hardly stop him flying at this point. After being further pushed to sign it however, he had the bright idea of getting NASA to agree to add a final clause that all terms were under the guidance of the mission commander on the space station (this was actually already the case anyway and this would just reaffirm it). The moment he arrived the commander welcomed him on board, told him he could go wherever he wanted, take any photos he wanted and not to feel the need to ask again.

To get back to Earth and Ultima games, the topic of Mount Drash came up somehow. The story is that Keith Zabalaoui (a friend of Garriotts who was credited on Akalabeth) had already written the game but Sierra weren’t going to publish it unless they could use the Ultima branding to increase sales. The game was never intended to be an Ultima but Garriott gave this his blessing to help his friend out, hence Ultima – Escape From Mount Drash. This makes it a legitimate part of the Ultima series as far as I’m concerned and a whole lot more collectible (if that is possible). I might even be prepared to fork out the money myself now if the chance ever arose although I’m not so sure I wouldn’t rather buy another bookcase full of less extreme vintage software for the same price.

I asked about Ultima 4.5 which is something I’ve been curious about ever since I heard of it. According to an RG interview I read a long time back Ultima 4.5 and Ultima 5 were being developed side by side for a while and I wanted to learn more. Garriott didn’t think this was the case however and said that Savage Empire was the first time they had tried to reuse an engine.

He went into some detail about the thought process behind each of the Ultima spinoffs. The original idea was that reusing the same engine would mean that the game could be made for less than the original which is certainly what I would have expected. However with Savage Empire, it apparently was so much work to strip out the original assets that it ended up costing just as much as Ultima 6 to make. They thought could learn from this with Martian Dreams but that also cost just as much and both games sold less than the mainline Ultimas casting questions on the whole notion of engine reuse.

With the U6 spinoffs not entirely going to plan, a different approach was taken with Serpent Isle whereby the original game assets would still be used for the most part which was supposed to keep costs down but this plan failed once more. It occurs to me now that I should have asked about Crusader at this point, which I’m assuming was Plan C. If so this probably worked out better by using the engine for a completely different genre of game and thereby not just appealing to a subset of those that bought Ultima 8.

LOAF asked about the Ultima anime which was supposedly made in Japan in the 80’s. Garriott was adamant that there was never any such thing which would certainly explain why it hasn’t surfaced by now. I would assume that the screenshots that exist were simply created for a Famicom TV commercial which sounds like a far more likely explanation.

The only other things I can recall were a mention of Ultima Forever as he had just been out for dinner with Paul Barnett the day before and agreed to appear in the game travelling around in the skies. He thinks their heart is in the right place for U4E but he hasn’t seen the game so couldn’t give an opinion on it.

We also got an impromptu illustrated guide to the iconic shapes of the Wing Commander 1 fighters (and other things), which Garriott considers to be far more memorable than those in later games. I also recall asking (more to fill an awkward silence than anything) whether Time Bandits really was the inspiration for the cloth maps which of course it was but we all knew that anyway. 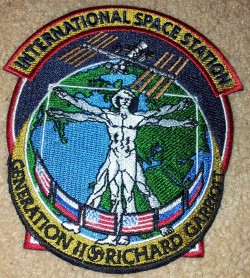 Our hour was up almost as soon as it had begun. We got some final photo opportunities and there was one little bonus when we were gifted Richard Garriott space suit badges. I came out slightly shell shocked and I still can’t quite believe I got to do this in the first place. Many thanks to Lord British for taking the time to show us around and also to Loaf and Chris Reid for all but one of the photo’s on this post.

3 thoughts on “Through the Portalarium”