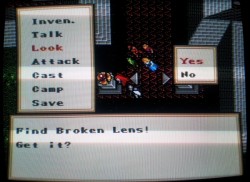 As with the vast majority of this SNES port, the latter stages played out much the way I remember so I’ll be keeping this post reasonably short. I got hold of both the lenses I’ll need for the end of the game then headed for Sutek’s castle to get hold of the balloon plans. 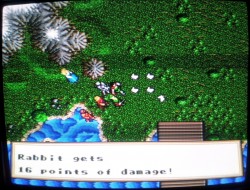 The castle was still guarded by murderous rabbits but there was a slight change as I’m sure the original game needed a telekinesis spell for lowering a drawbridge. This port has no such spell so it’s just a case of blasting the front door open with a powder keg. 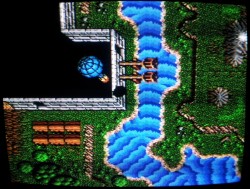 Once I’ve fetched the plans, I travel around Britannia collecting the various parts to make my balloon. In part 4 I was concerned about not picking up the fan but it turns out that it’s not needed on the SNES and I can move wherever I like freely. Building this is arguably something I should have done much, much sooner as it’s a great way of getting about. 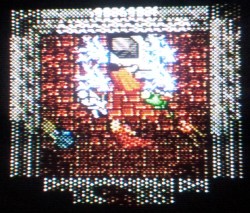 That only leaves the vortex cube to be fetched which is in Stonegate. I balloon my way there and locate it in the cellars of the former home of the Shadowlords. Around this time, I realise that I forgot to pick up my balloon when I entered and return to find it has vanished. This leads to another journey around Britannia collecting everything I need all over again. 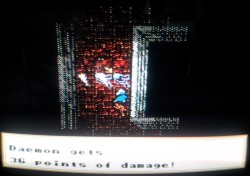 Being more careful with my new airship, I head for the Shrine of Singularity to get the final quest to go into each of the shrines of the gargoyles principle virtues. Two of these are relatively simple with only the Shrine of Diligence being a right pain until I eventually manage to figure out where the secret door is. Even then my party gets flattened by a horde of daemons on the second floor. I’ve found the combat against the stronger creatures in this version a little heavier going than I recall on the PC. I’ve still not invested in any equipment for my party so I could certainly have made life easier for myself.

There is no gargoyle mantra to collect in each of the shrines, I merely have to talk to them and then return to the Shrine Of Singularity to receive the final goal to go to the codex. 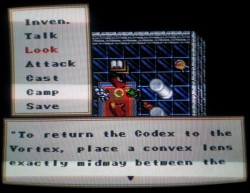 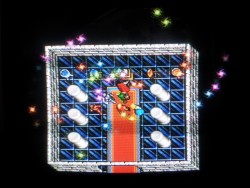 With everything in place, there is a show of swirling lights before the codex vanishes. 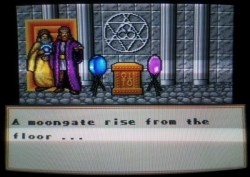 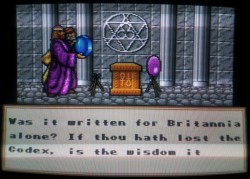 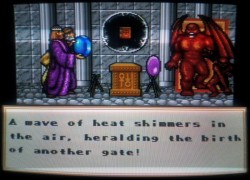 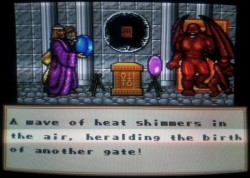 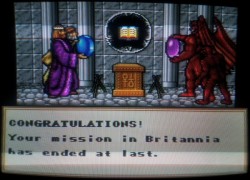 The final cutscene is there in full (with slightly altered graphics). The music is just one piece all the way through and it’s not exactly obvious to my ears that it’s the gargoyle music playing in chorus with Rule Britannia. This is a loss as it was a great little twist for the ending. I’m not asked to report my feat to Lord British but I imagine Origin would have run out of Ultima 6 certificates by the time this came out.

It must be about a month since I started Ultima 6 and all the gaps I’ve taken in-between are no way to play any RPG. I have still really enjoyed this port when I’ve had the time to get into it. It’s the sixth Nintendo Ultima I’ve played if I include the Runes of Virtue games and easily the best of the lot on it’s own merits. I’d prefer it if nothing had needed to be cut but I can’t say I missed anything that was left out all that much. The fullscreen graphics during daylight hours make up for it even if it does seem to be permanently winter in Ultima 6 if the length of the nights is anything to go.

Before I started I didn’t think the SNES would be up to a game the size of Ultima 6 and was expecting far more compromises. The irony is that for an Ultima fan who has already played all of the games and is looking for something different, this is arguably the least interesting of the Nintendo Ultimas because they changed as little as they did. It would be a great choice for playing via an emulator on your portable of choice if you want some Ultima on the go.

I’ll be taking a quick look at Savage Empire on the SNES next. It will have to be quick as I don’t speak Japanese and won’t be able to do a whole lot more than run around the map.