One thing Origin staff appear to have been fond of is T-shirts for every occasion and development team. I’m not sure when this trend started but the earliest development shirt I’ve seen is for Ultima 7 so the early 90’s looks like a good bet. There was an Ultima V shirt available through mail-order prior to this though. At any rate there must be dozens of these around in their various varieties, near enough all of which are pretty hard to get hold of. There are photos of many of them at the Origin Museum Flikr Photostream. I brought a handful back from Austin and will post a few photos this week, starting with this Ultima Online 2 developers T Shirt:- 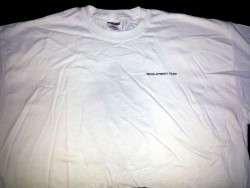 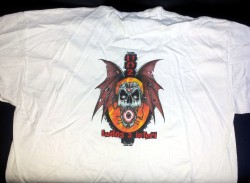 Ultima Online 2 never made it through to release of course which makes this something of a curiosity. There isn’t a lot going on with the front with no more than the words “Development Team” but the back has a logo I’ve not seen elsewhere:- 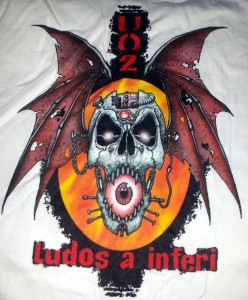 For those who don’t remember their Latin, the text translates as “Games from hell”. The first thing I think of when I see flying skulls with bat wings is the start of Evil Dead 2 which may have been an influence but this one has some cybernetic enhancement to fit the UO2 theme.