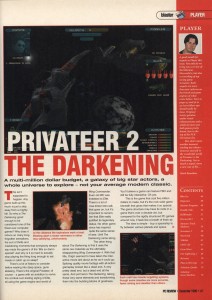 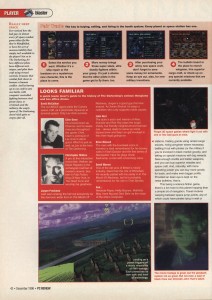 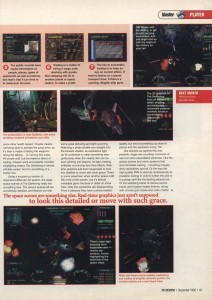 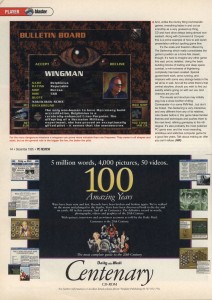 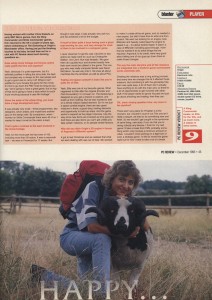 This is a preview of Privateer 2 (dressed up as an article about the future of interactive movies) taken from the October 1995 PC Format. There are a handful of behind-the-scenes photos from the shoot as well as interviews with Steve Hilliker, Erin Roberts, John Hurt and Brian Blessed. It’s full of predictions about the future of IM, including a particularly out-there suggestion from Brian Blessed about recording a dialog of words into a machine and having your performance created from them. Now I come to think of it, the way Brian Blessed acts that might actually work. 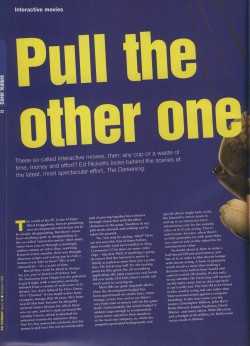 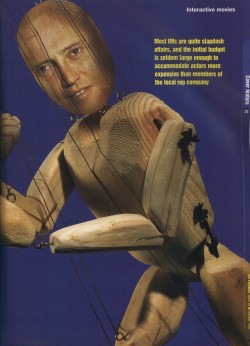 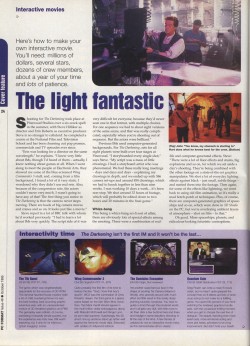 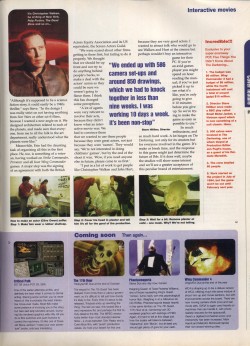 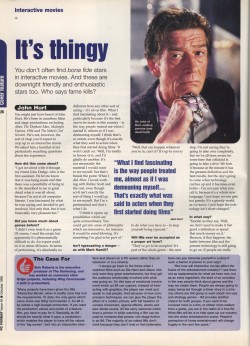 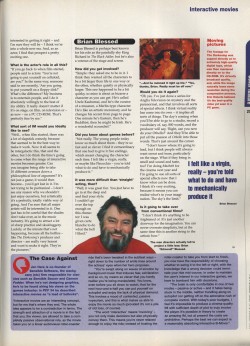 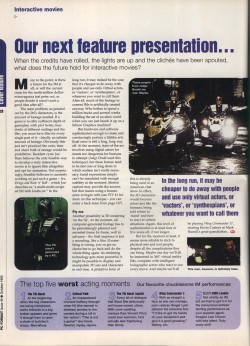 My first attempts at finishing this demo didn’t go too well. On launching it always presents the player with a mission to rescue an ejected pilot. It’s the same mission each time but the location at which he has ejected is seemingly random. However, it never seemed to be so random that he was near enough to reach before the timer on the demo expired and my ship blew up.

However, one of the things I tried to run on my DOS PC was this demo and the first time I tried it the escape pod was only a single jump away from me. This should have made it easy, except I couldn’t remember the key to tractor him in (yes it’s T), and while I was randomly trying keys one of the enemy ships shot him down. It didn’t help that the demo was running way, way too quickly on the PII. 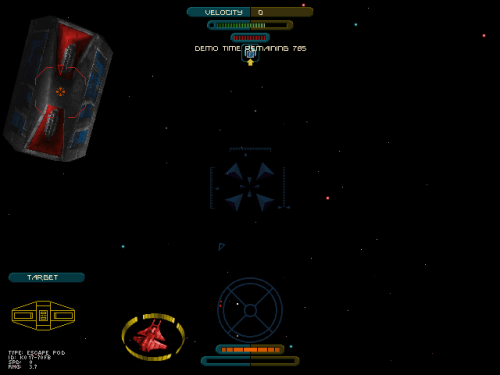 This at least confirmed it was possible to complete, and forearmed with the knowledge of which key to press I set out to have another go today. I never had such a short journey but I did manage to reach him 11 jumps from the start after several attempts. Not having much time left, I ignored the 3 fighters and tractored him straight in. 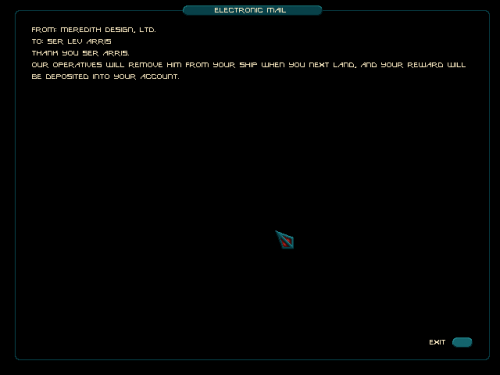 It’s not much of a reward for completing the mission but if a jobs worth doing… The idea of landing to collect the reward was completely out of the question as I had about 20 seconds left. 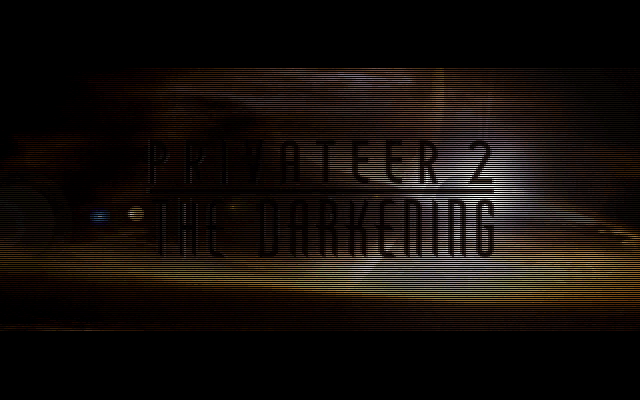 I got this demo off the April 1997 cover CD of PC Zone. I assume it’s the same as the one on WCNews, although it did insist on me having the CD in the drive when running it. To get this running in DOSBox, I had to turn off EMS, XMS and UMB and swap to a normal core rather than dynamic. 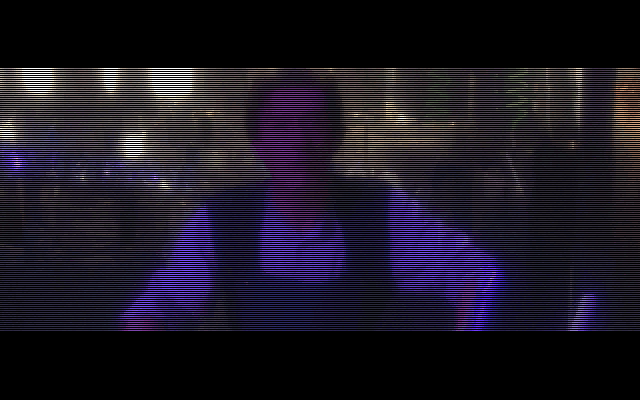 It starts with the entire Canerra crashing sequence before dumping me on Hermes without much idea of how I got there. I can go to the bar and talk to Joe who either comments about me smelling of success or being too good and it not helping his reputation. I don’t recall seeing these scenes in the game actually, so they may well be unique to the demo.

With nothing else to do I leave the bar. The booth is closed for business so I don’t get to buy my first ship and instead have to take off in the one supplied. 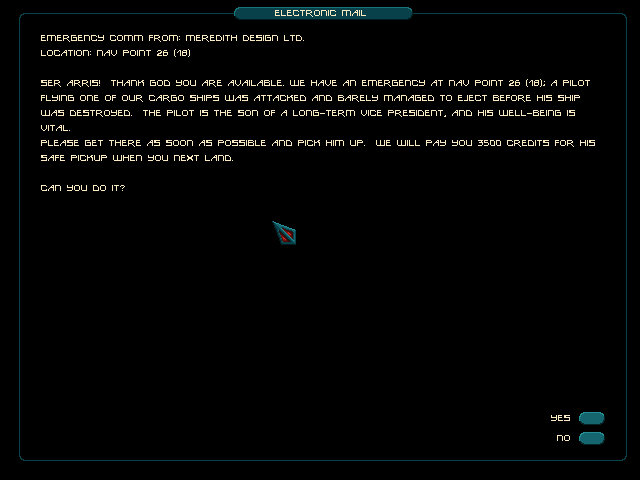 After takeoff, I’m immediately emailed my first mission which is to go and perform a rescue mission. The location of this varies but was invariably a long way away whenever I tried it. 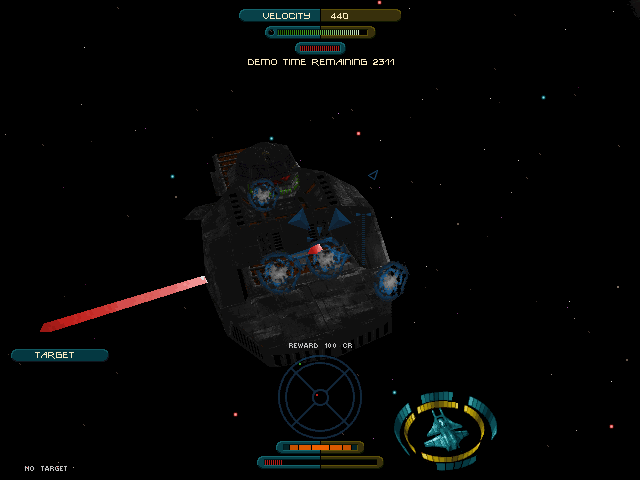 I’m given a reasonable ship for the job kitted out with some decent guns and an afterburner. I immediately notice the countdown timer here which is rapidly ticking down to me being kicked out of the demo. The problem with this is that the time limit is so strict that I don’t actually get to the nav point. Mileage on this would vary depending on how much opposition you run into but I tried several times without managing it. 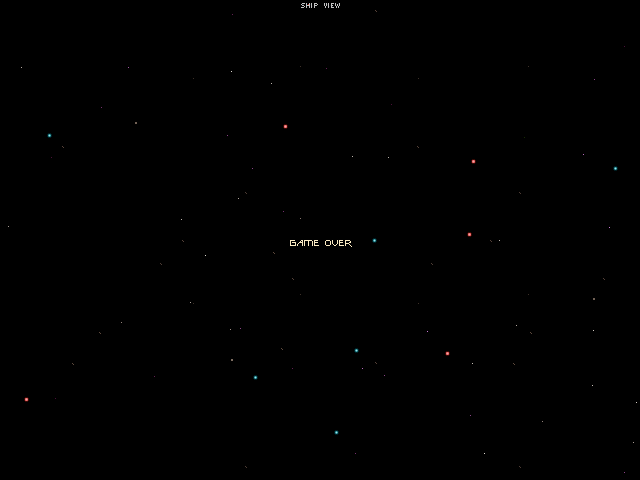 The nearest I got was a couple of nav points away. As soon as my time runs out I blow up and it’s game over. I’m sure it’s reachable with some luck but I can’t imagine it’s worth the effort. 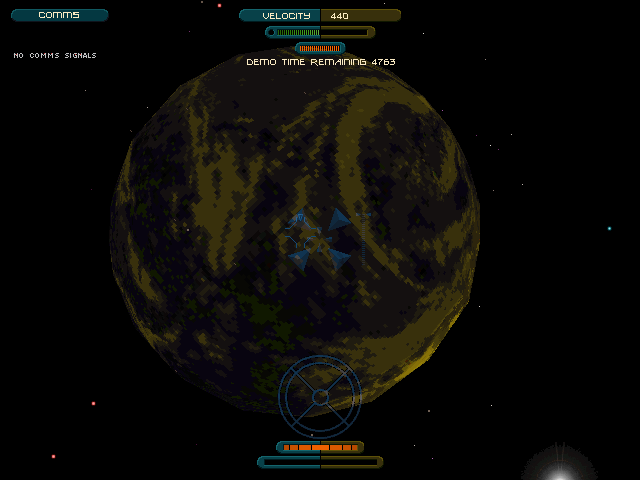 Out of curiosity, I loaded up the game again and tried flying to another planet and landing to see what would happen. It turns out the communications system is disabled so I can’t ask for landing clearance.

I can just about remember playing this demo back when I bought the magazine. I was definitely impressed by the engine as you simply didn’t expect 3D graphics to move that smoothly back then and this probably sold me on it more than anything else. I’d also played WC4 at this point and as the next in the series this was already going to be an essential purchase. The quality of the movies was a slight letdown just on a technical basis as the video quality was a step down from Wing Commander 4. The movie segments in Privateer 2 were done first which is presumably the reason.

The space flight is quite a different experience to Wing Commander with slower, smoother movement and much faster firing rates. It’s less fun but I wouldn’t want every space combat game to play the same and I quite like the variety.

The demo does it’s job of offering a taste of the game but apart from the (possibly) original movie segments, there isn’t much new in this except from a mission that there isn’t time to complete.

I found this Privateer 2 feature today on Youtube from the 90’s kids UK TV series Bad Influence. I get the impression Clive Owen didn’t have too much idea what the game would look like from the interview. The video has the entire first half of the episode – skip ahead to 4m 55s for the feature.