It’s time for a quick look at another random old game from the pile which this time is going to be Ocean’s Pushover. I only picked this up recently at Revival Solstice although I did play it a little many years ago. 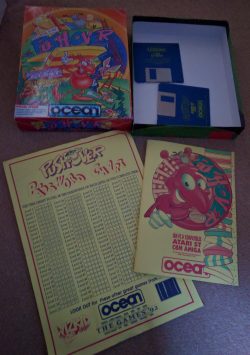 It was published by Ocean in 1992, developed by Red Rat Software and is a puzzle game with some light action elements. It consists of 100 screens in which you play an ant who has to move dominoes around in such a way as to get every one of them to fall with a single push and a particular one to fall last . There are numerous types of dominoes to contend with. Some will keep flipping until another domino gets in their way, others float upwards before toppling, some explode, disappear, split in two, etc.. It’s a neat set up for a puzzle game giving endless options for levels, some of which get extremely tricky. 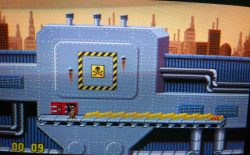 The arcade element comes in as it’s often required that you start dominoes moving and then race around rearranging others before the chain catches up. The level design can be extremely unforgiving here allowing no mistakes whatsoever. It is also possible (and sometimes required) to trigger dominoes without a push by falling on top of a splitter while carrying another domino. 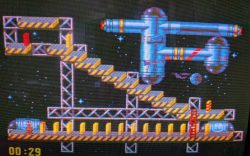 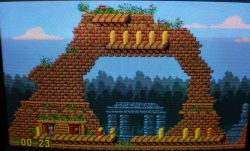 The motivation and storyline behind all these puzzles is where things get a little strange. Back in the early 90’s here in the UK, Quavers crisps were being advertised on TV in short cartoons starring a character called Colin Curly, voiced by Lenny Henry. For instance:-

I have absolutely no idea how the deal came about but Quavers ended up sponsoring Pushover and Colin became a part of the game. The intro sequence shows him enjoying his Quavers a little too much, to the extent that he floats into the air, they all fall out of his pocket and he loses them down an ant hill. G. I. Ant volunteers to get them and the game starts. The intro only lasts 20 seconds or so but takes up the entire first disk of a two disk game. 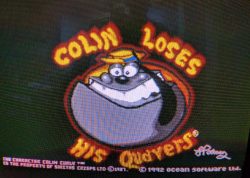 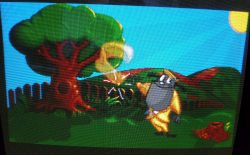 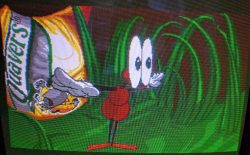 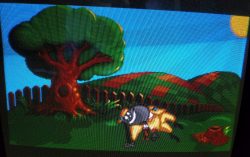 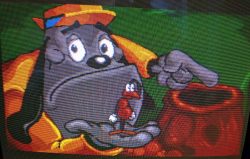 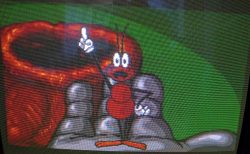 Every 10 levels or so, you collect a packet of Quavers from somewhere that isn’t all that apparent and get a naff little animation of giving it back to Colin. These crisp packets then appear on the menu screen to show your progress. What any of this has to do with toppling dominoes I have no idea. If I’ve ever seen sponsorship shoved onto a product as an afterthought this is it. 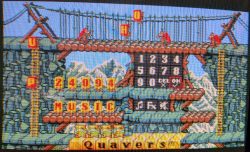 The deal was taken a step further with free Amigas and copies of the game being given away in crisp packets as pushed in the advert below:-

Sponsorship aside, the gameplay of Pushover is really solid. This sort of title has a degree of timelessness and having to control G. I. Ant is quite a nice touch rather than keeping it as an abstract puzzle game. You can’t let him fall too far and have to bridge gaps, blow holes in platforms and the like to get him where he needs to go. I would still say that Pushover is lacking a certain spark but I’m not sure exactly what. I’d just like to see a bit more variety I suppose. The levels get harder for the most part and the backgrounds change every few levels but nothing truly new is ever introduced.

I found the controls could be a little wayward on the Amiga and this was certainly a point of frustration. It’s mainly because on an A1200, it plays considerably faster than it’s supposed to. This wasn’t something I realised until late in the game when I looked to YouTube for assistance with a particularly nasty level and saw everything moving at half the speed. I managed until I got about 80 levels in but reached a point I simply couldn’t progress past at that speed. I swapped to the Atari ST at this point which aside from the worse sound was near enough identical. It’s about time my ST actually saw some use – near enough everything on it slightly inferior to the Amiga version and it never gets switched on. 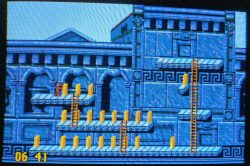 The last level of the game is a little devious as all the dominoes are blank and don’t show you what type they are. It all has to be worked out through trial and error but is at least relatively simple otherwise. The scant reward for beating all these levels is a static congratulations screen.

Pushover is a pretty decent game that probably deserved better than having some inappropriate sponsorship thrown at it. I can’t recommend it wholeheartedly as it’s just not quite special enough but it’s was above average when it was released and hasn’t suffered all that much for the 25 years since. There was a Windows remake done a few years back which may be the best way to play it now but any of the other versions I’ve tried hold up perfectly well. 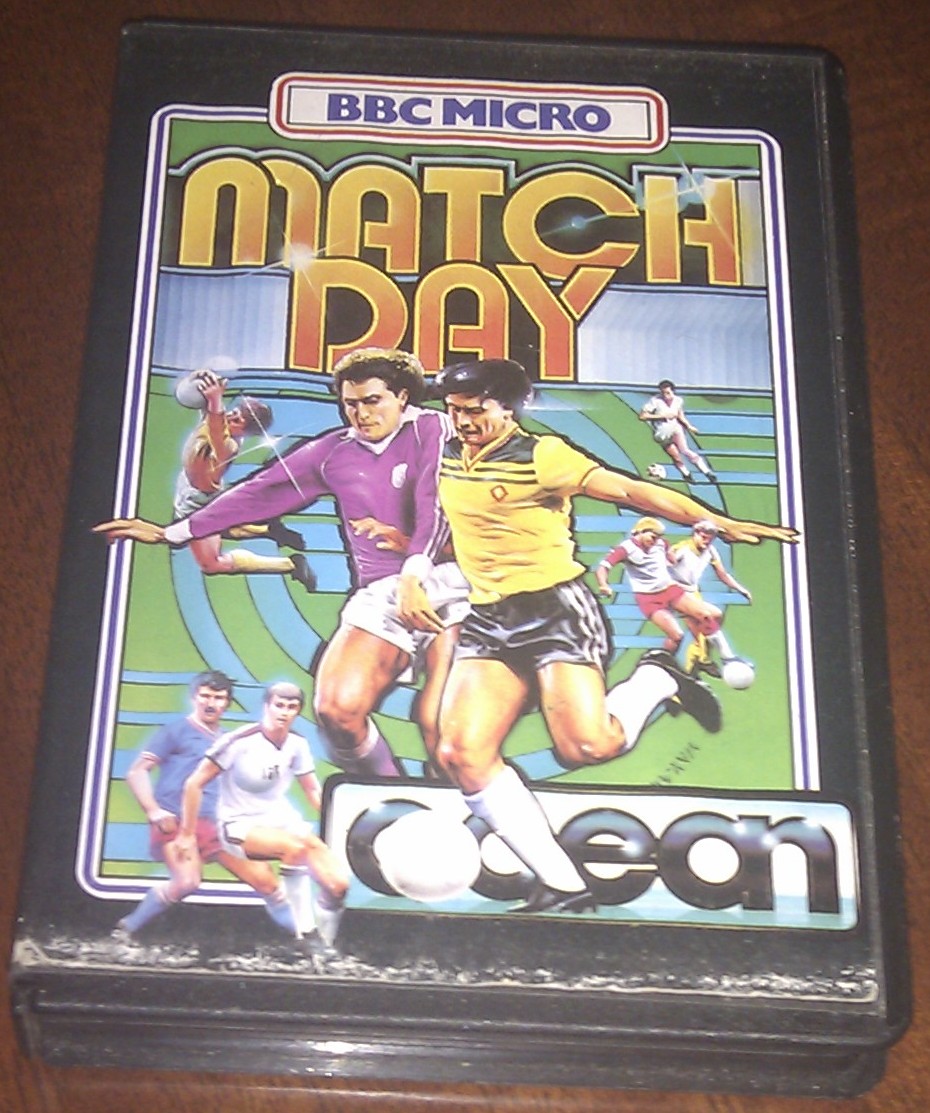 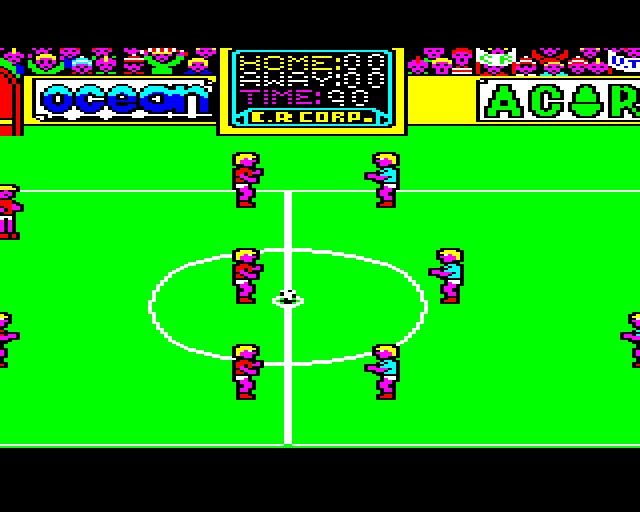 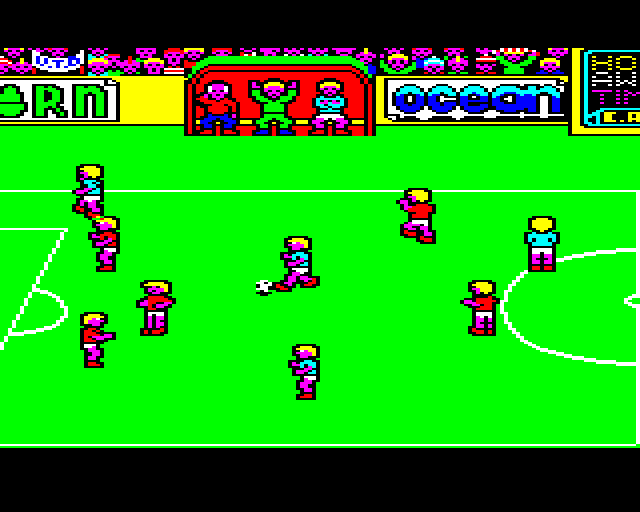 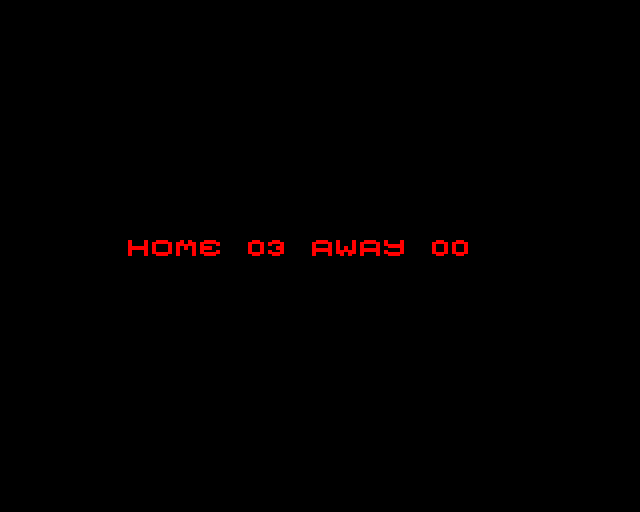