With the all too early death of David Bowie recently, I thought I should play something appropriate. I’ve been a Bowie fan since the late 80’s and still have most of his records on vinyl. Despite that, I only saw him live the once on the Outside tour where he was being supported by Morrissey. I can’t think of any bigger tribute than to say it would have been more than worth sitting through another hour of Morrissey if I’d needed to. It’s hard to imagine that there won’t be any more albums now as they have been such a constant throughout my life.

To get back to games, the obvious (and better) choice would have been Omikron since Bowie wrote the music and even appeared in it but instead I thought I’d try Lucasfilm Games’ 1986 adaptation of Labyrinth on the Commodore 64. This is definitely a noteworthy game as it was effectively Lucasfilm’s first adventure game coming out prior to Maniac Mansion and all the other classic games that used the SCUMM engine. As such, the demand for boxed copies does tend to drive the price through the roof.

The disk release got a nice cardboard box version and is clearly the one to own. Here in the UK, you had to be relatively well off just to own the C64 in the first place. The disk drive was pretty much out of the question. For once this didn’t stop us being able to play the game as it was also released on multiload cassette which is the version I’m going to be playing here. 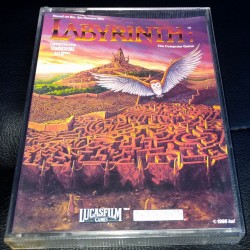 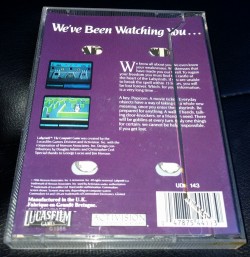 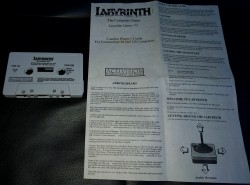 The packaging is a typical double cassette with a folded up leaflet inside with the loading/playing instructions. The length of that cassette bears noting as I’ll be playing through both sides of it before I finish the game. 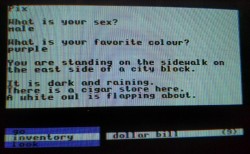 Labyrinth gets off to an unlikely start for a graphic adventure as the first section is a mini text adventure section in which the player has to go to a cinema and watch the Labyrinth movie. It’s a two word parser but instead of being free to type, the possible words are in scrollable menus on either side of the screen.

There are only a handful of locations and one puzzle to speak of which involves stopping a geek from talking to you at the cinema so that you can settle down and watch the film. It’s not the most promising of starts despite being one of the best parts of the game in hindsight. 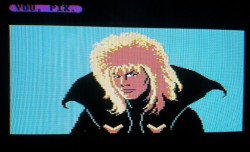 A minute of loading later, there is a Wizard of Oz moment as the graphics and audio kick into life and Bowie as the goblin king sucks me into his world to be his thrall. I only have 13 hours to get to the centre of his labyrinth and free myself. 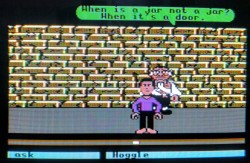 The next section is mercifully larger and consists once again of a large corridor with no obvious doors in sight. Hoggle is hanging around but isn’t particularly helpful. I just have to pick up any items in the long corridor and then exit through an invisible door(anywhere the wall has graffiti). This is going to be the pattern for the game, walk around really long corridors picking up anything that isn’t nailed down and then try to find the one door which takes you to the next area in a sea of identical looking exits.

There are puzzles of sorts. The room on the top left has two doors one of which leads to certain death. The guards won’t tell me which is which unless I open all the doors in the brick corridor. The brick corridor is actually three corridors, all full of doors, one corridor of which has a guard in that I have to avoid. The solution to avoiding that guard is to attract him to one end of the corridor before escaping then when you return he hasn’t moved so you can run the other direction instead. Once solved, I’m still left with trying all of about 15 doors one at a time until I find the only one that takes me to the next screen.

Getting through all of this leads to a series of stone corridors looking much like someone has just redecorated the brick corridor. A particular door is guarded and I discover I can put the guard to sleep by giving him a peach I found earlier. I still can’t go through the door but can steal his helmet which I end up wearing for the rest of the game much to my detriment later on.

This leads on to a section with a wise man in a maze in which he gives a cyptic-ish clue such as telling me to walk the path of the clock from 12-9 which basically means go through every door of the above screen clockwise starting at the top to escape the room. The given clue and solution seems to be random as I got variations on the theme on other games. 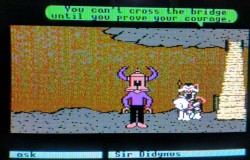 After negotiating several more corridors of the more leafy variety, I get to Sir Didymus who is guarding the bridge over the bog of eternal stench. There is nothing to do on this screen except talk to him and then walk off for now as he wants me to rescue Ludo before I can cross.

Luckily for me, Ludo happens to be the next screen tied to a tree in the middle of a maze. This is a mini-arcade game in which the big squares on the ground change colour Q-Bert style when walked on and turn into trap doors after the final colour. I have to get a couple of guards to fall down the holes which requires priming a pad and getting them to chase after me. Ludo can then be chopped down with the shears I’m carrying.

Some more walking round corridors and a lot of loading later, I get to cross the bridge over the bog of eternal stench and find myself in more corridors except this time the walls resemble the keys of a piano. There is a black key conspicuously missing which I replace with a plank I’m carrying. I’m expecting to get to the end of the game at this point but Jared won’t let me in as I look too silly in the helmet (yes really). I can’t take it off either as that would be littering. If there was any option here other than restarting I couldn’t find it. This being the cassette version, there are no save games… 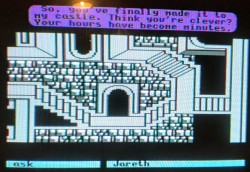 The best part of an hour later, I’ve played through the whole thing again and am back where I was minus helmet and facing the goblin king in his Escher room. What I have to do here is follow him around and throw crystal balls at him until one hits. I’ve a limited supply of crystal balls but they boomerang back to me so it makes no difference as long as you picked at least one up earlier. 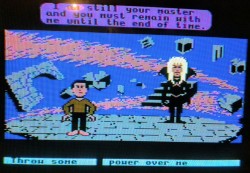 Once thwacked by a crystal ball, the goblin king claims to still be my master but as soon as I speak to him turns into a frog and the game ends with no further ado.

I’ve not gone through every screen here and for good reason but I’ve left precious little out either. It appears that in the conversion to cassette some of the puzzles have gone missing. There was at least one screen missing entirely judging from videos I’ve seen on YouTube.

It has to be said that I expected something a bit better than this from Labyrinth. The loading times weren’t as annoying as might be expected given that the cassette would start up again after every single section. Each load was reasonably brief so it was never all that long to wait. Even so the hour to beat the game must have included 30 minutes of loading. My real problem with Labyrinth was that the game itself is almost non-existent. On the second playthrough I accidentally missed half the puzzles, then fell in the bog of eternal stench when crossing the bridge and it made no difference to anything whatsoever.

There are some similarities to Maniac Mansion with traces of the same humour and a similar visual style. The game looks quite nice and there are occasional bits of music from the movie to add some atmosphere. Maniac Mansion was a huge leap ahead of Labyrinth though. I associate Lucasarts adventures with strong storylines which certainly wasn’t the case here. There are elements of the original movie but no plot to speak of within the game once it turns graphical. If you haven’t seen the movie you will have no idea at all what is going on. Even if you have, it doesn’t make much sense. Similarly the puzzles were sparse and it’s almost possible to blunder through the game without having to solve anything.

If you hadn’t guessed by now, Labyrinth really doesn’t have much to recommend it. It is simple enough to give the player a good chance of beating it on the first attempt and doesn’t offer anything in particular on that brief journey. I can only assume the price it commands on Ebay these days is because of the games that came after it rather than people actually liking Labyrinth itself all that much. No doubt the disk version plays a little better than this one. Labyrinth is relatively innocuous at least and does hint at what would follow with Maniac Mansion but I’d much rather have been playing Space Quest which was released the same year.