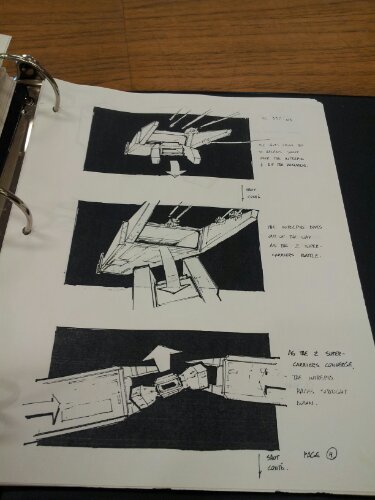 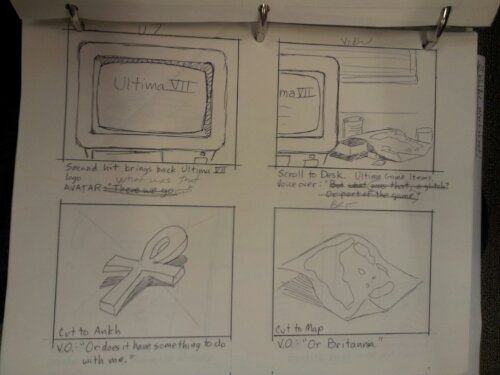 One last Ultima 7 relic to finish off the 20th anniversary with. These are the negatives for a strip advert that would have appeared on one edge of a magazine page back in 1992:- 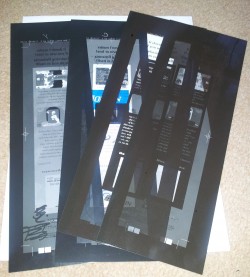 I don’t have the actual proof for this advert so getting a look at the finished version involved some scanning and a little tinkering around in Paint Shop Pro. Scanning these on a misbehaving book scanner with a piece of white paper behind to get them to show up at all is not ideal. I’d need a giant negative scanner to do this properly but the final image could have been worse:- 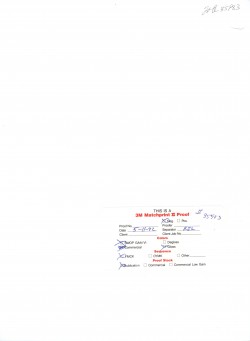 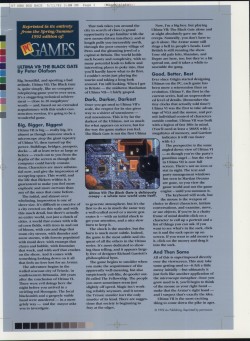 It’s not been long since the last one but today marks another 20 year anniversary, this time for the release of Ultima 7. Combined with Underworld it was a real one-two punch for Origin at the time with two classics that still have a following to this day.

Another anniversary can only mean a reminiscing post followed by the sharing of some unlikely Ultima 7 related objects. I’ll keep the reminiscing to a minimum this time as I’m nowhere near as familiar with Ultima 7 as I should be. I know all the games in the series before it well enough but the only time I’ve completed Ultima 7 was playing it for this blog.

A large part of the reason for that is that Ultima 7 didn’t get the universal praise that Underworld did. A prime example would be this review where the game scored a paltry 4 out of 10. Having major bugs in a released game was a heinous crime at the time with the only option for most people being to have Origin mail them a patch disk. Other reviews were far more positive but this was the one I read back in 1992 and it didn’t make me want to run out and buy the game.

Also at this point the Ultima series was so old that starting 7 games into it didn’t seem like the best idea. I don’t think I completed any of the main series until after the Ultima Collection came out in 97 giving me the chance to tackle Ultima right from the beginning.

Even owning the Ultima Collection, some other distraction clearly came along before I got to Ultima 7. This would have been around the time I started consciously collecting software as the missing games from the Ultima Collection are probably the single biggest factor that got me started. I didn’t want to miss any games out and ended up buying copies of Savage Empire and Martian Dreams. The packaging for these led me into wanting to own the earlier games and so on. I wouldn’t have imagined at the time that I’d end up with a floor of my house slowly being taken over by this hoard which should serve as a warning to the unwary beginning collector. At least the other 2 floors remain game free (I’ll ignore the Vectrex and 3DO in the main room).

Ultima 7 is a game I will revisit at some point and give it a better playthrough than I made when blogging it here. With such a huge and detailed world to explore, it’s not a game made for rushing through. Looking back at it now, I consider it the last great game in the main series with Serpent Isle coming close but not quite reaching the same heights. My favourite aspect was the way the story slowly revealed itself, despite the open world and it’s a real masterclass in how a sandbox game should be done. It perhaps put the traditional RPG aspects a little too far into the background to top my list of favourite Ultima games but it certainly made up for this with the dialog, world simulation and sheer scale of Britannia. It’s one of the definitive RPG’s of the 90’s and still as playable today as it ever was.

There won’t be too much of it but I’ll see what I can dig up in the way of Ultima 7 memorabilia and post it throughout the day.

The recent publication of the Ultima Guide and it’s companion book raised my curiosity to see what I’m missing and if I have anything good that isn’t in there. This could prompt a handful of posts on here over coming weeks and months if I dig anything up. One of the rumoured items in the guide was an Ultima 7 patch disk which I can confirm does exist as I’ve got one:- 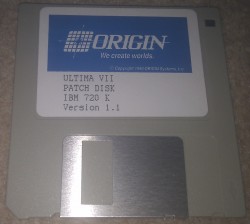 It contains the regular patch if the file size is anything to go by. I would imagine that there must have been hundreds, if not thousands of these at the time of Ultima 7. The game did after all have a major bug and we didn’t all have the internet back then to grab a patch.

A floppy disk is far too dull to warrant its own post, so I’ll liven it up with a picture of an Origin shopping bag:- 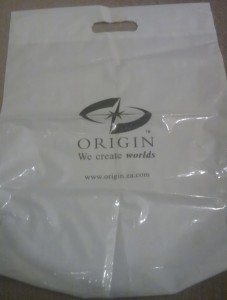